The Spirit of Manchester United

We are very grateful to have received some most interesting photos sent in by Kevin, who lives in Quedgeley, Gloucestershire. A keen Man United fan, Kevin can be seen in the following digital photograph with Sir Alex Ferguson, the erstwhile manager of this, the world's most famous football club.  Kevin is understandably very proud of this photo. 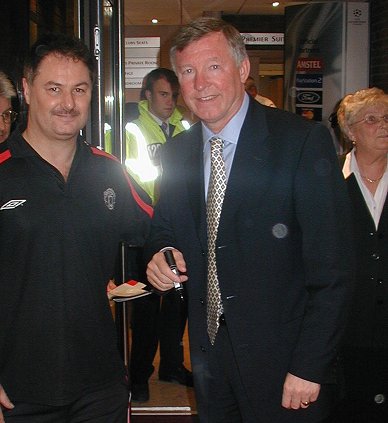 Apparent on the image are some classic orbs, and Kevin's found them very mysterious, if not a little spooky.  He asked us to take a look at them for an opinion about whether there may be a supernatural or paranormal explanation.

First, let's take a closer look at the photograph.  It's clear that this particular image is grossly affected by the bright reflection of the security guard's coat.  Nevertheless, the orbs are quite prominent considering how well lit this room is.  There is also a strange colouration to the lower left hand-side of Sir Alex's jacket, almost like a spooky hand!  It's not a mark on his jacket itself, because the 'thumb' extends to a point over his trousers.

Let's take a closer look at the orb near to Kevin's face:

On it's own, this might not seem too spectacular, but it's not the only time that similar odd lighting effects have been spotted above Kevin's right forehead.

The following three images were taken within 35 seconds of one another in Kevin's garden on 27th August 2006, also using a digital camera. 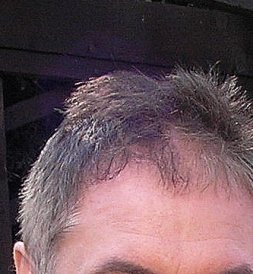 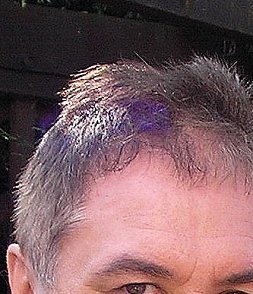 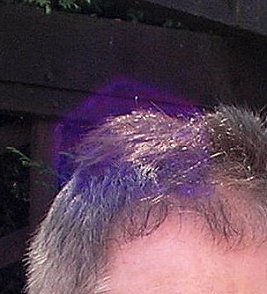 In common with the photograph containing Sir Alex Ferguson, there is a bright light source to the back of the picture, and this might be creating a lens flare in this instance.  However, what is striking about these photos is the way the colouration evolves over the course of the images.  A simple lens flare might be expected to be circular, yet here we have a multi-faceted shape visibly changing over the course of 35 seconds.  Kevin writes:

"It seems strange that the whatever it is, is in the same place on me!  When it was taken ( 3 pictures) I had just lost my cat and she is buried in the garden."

Here's another of this coloured orbs in Kevin's garden, in exactly the same position as it happens: 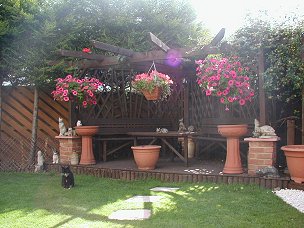 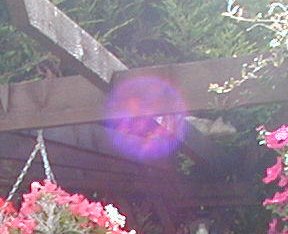 Notice the additional white halo effect seemingly in the foreground of the photograph.  With the sun behind the garden, these could be lens flares, but we think you'll agree they're pretty dramatic.  A fascinating series of photographs, and we are indebted to Kevin for kindly allowing us to reproduce them here on 'Gloster Ghosts'.  Finally, here is a terrific photo taken by Kevin at Old Trafford. 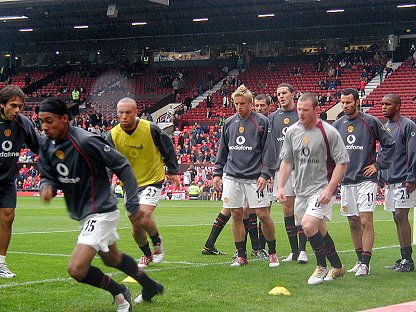 It features an orb dominating a picture of some of the Manchester United star players.  Although it is clearly raining, which may lead one to suppose that the orb is a raindrop, this photo does not appear to have been taken using a flash. 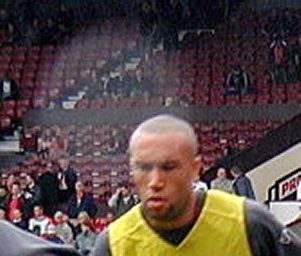 An Australian correspondent, Andy Richards, recently sent some thought about the photograph of Sir Alex Ferguson above, wondering whether the "skeletal hand" might be attributable to an infra-red heat signature left by his hand.   In other words, if Sir Alex had his hand in his pocket directly before the photo was taken, perhaps this warmed the cloth of his jacket sufficiently to be picked up by the IR sensing digital camera.  This seems an unlikely possibility, but an intriguing thought nonetheless.

Following our correspondence, Andy sent some photos taken at his local graveyard.  The first shows one of a couple of very clear orbs captured on a digital image.  He followed this up with a short controlled experiment: 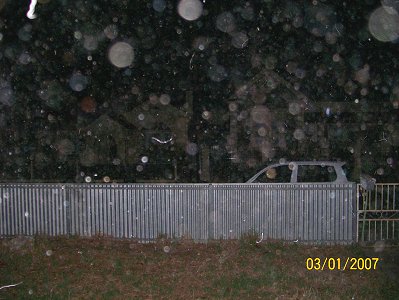 "Thank you for responding to my suggestion re: the "ghostly skeletal hand".  The reason I ended up at your website is because I've been wondering about the nature of the orbs that have been appearing in my digital images. After seeing your website, I've taken these pictures especially for you to look at and would appreciate your opinion about them, if you wouldn't mind.

The before and after shots were taken about 24 hours after the graveyard photo was taken. The weather conditions are practically identical. Very warm (about 26 C) & dry with very little breeze. This is summer in Adelaide, South Australia.

The one in the graveyard has a couple of 'orbs' in it (top left). The other two are before and after shots of shaking a dusty rug in the dark & using a flash. The second pic (top right) was taken immediately following the 1st pic (which was completely clear of orbs) after shaking the rug.  I conclude from these before & after shots that the orbs in the graveyard pic are also dust particles."

Difficult to argue with that analysis, we'll think you'll agree.  Dust and water particles sometimes create orb effects in digital images when a flash is used.  The question is; is every such effect always attributable to water and dust?  Or do some have a different, more paranormal origin?  For instance; why is that that when you take a succession of photos under very similar conditions do orbs appear on some pictures and not on others?  If dust and/or water is present in the air, should not all the photos be similarly blemished?