The Followers of Horus 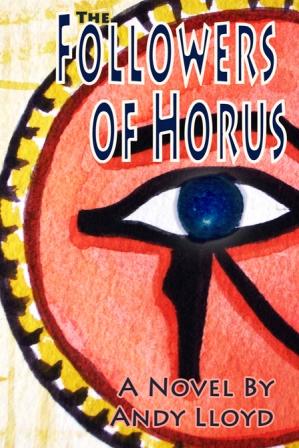 "Meanwhile, on Earth, an unexpected lead brings journalist Bill Bainbridge back into the hunt for the location of the Dark Star - information which will blow apart the entire conspiracy.  Without his knowledge, his actions are being guided by a tangled web of Military Intelligence operatives, aided by the enigmatic “Tall Man”, Nathan Keye.

When the Ezekiel One black project runs into serious trouble, a third power emerges, aided by the uncompromising Followers of Horus.  For the first time in millennia, humans experience how it feels to become slaves of a god. 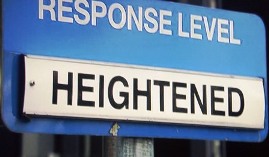 'The Followers of Horus' is the sequel to Andy Lloyd's first novel, 'Ezekiel One'.  It moves from an espionage thriller into the realm of science fiction.

You can order your copy of 'The Followers of Horus' for $11.94 through Amazon.com here:

The Followers Of Horus

If you live in the UK you can obtain your copy for £18.68 through Amazon.co.uk here:

The Followers of Horus

Origin of the ideas behind "The Followers of Horus"

My fictional work is a vehicle to put forward some new insights and ideas.  In "The Followers of Horus" I have outlined how a world orbiting a Dark Star could provide an habitable environment for life.  Scientists discuss 'The Goldilocks Zone' - the rough distance from a given star where liquid water on a planet's surface could support life.  The smaller the star, the nearer the planet must be to the star to be within this habitable zone.

Funny, then, that an exciting new discovery in the extensive Gliese 581 planetary system should involve a habitable world with synchronous rotation! Gliese 581g bears the same hallmark as my fictional account of the Anunnaki homeworld of Nibiru, as I've described in "The Followers of Horus".  Here's an extract from the relevant news item from the BBC, on 30th September 2010:

"The planet's average surface temperature is estimated to be between -12C and -31C. But unlike Earth, this alien world has one side always facing its sun and the other side constantly in the dark. So in-between the two sides, between shadow and light, there could be an area where life could potentially thrive. "Any emerging life forms would have a wide range of stable climates to choose from and to evolve around, depending on their longitude," said Dr Vogt." 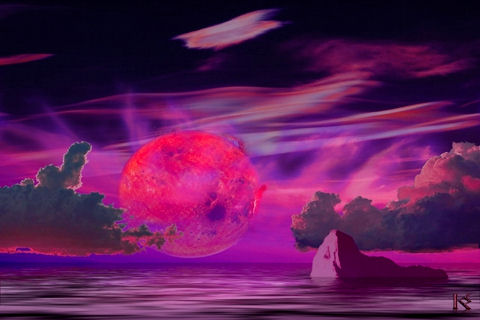 The Sun is technically a 'yellow dwarf', and lies on at the high end of the dwarf star spectrum. The next down is a red dwarf, and a planet in its Goldilocks Zone has a much smaller orbit than Earth.  Brown dwarfs have closer zones still, and sub-brown dwarfs, like the Dark Star I describe, have very close Goldilocks Zones - almost like moons.

The closer planets get to their parent stars, the more likely they will be 'tidally locked', like our Moon is to the Earth.  This means that the planet rotates on its axis over the same time period as it rotates around the dwarf star.  This is known as 'synchronous rotation'.  The result of this is that one side of the planet will face the dwarf star at all times. 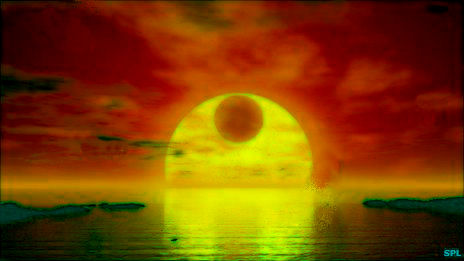 That's why I predicted in "The Followers of Horus" that a habitable planet circling the Dark Star would be tidally locked.  Here's an extract from the book, written in 2009:

Through the great glass dome, the crew of Ezekiel One could now see this world approach.  The homeworld was smaller than Earth, although larger than Mars.

It orbited the Dark Star in almost precisely 12 Earth days and was close enough to be directly warmed by the weak infra-red radiation emitted by the parent star itself.  As Ezekiel One approached, the bright crescent of the planet glowed red in the dim magenta light of the Dark Star.

The side facing away from the Dark Star was as black as tar, and apparently was entirely covered in a thick layer of ice and snow.  The planet Nibiru was locked into synchronous rotation by the Dark Star’s tidal forces.  Like the Moon circling Earth, Nibiru rotated on its axis at the same rate as it orbited around the Dark Star.  As such, it always displayed the same face towards the warming parent star, and the dark side of Nibiru was literally that - eternally enveloped in complete shade.  As a result, the side of the planet facing away from Nibiru was frigid and ice-covered.  One half of Nibiru enjoyed eternal daytime, while the other was eternally dark. 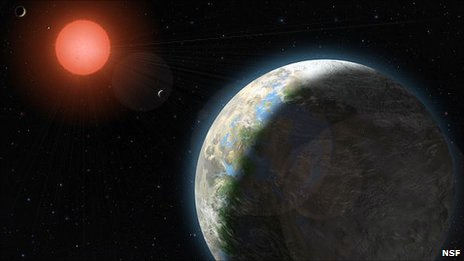 As Ezekiel One moved from the back of Nibiru towards the front, its brightly lit red crescent increased in size and magnitude.  Through the clouds, great mountains of ice shone in red light.  Eventually, the light side of Nibiru came into view, as Ezekiel One slowly moved into an orbital path around the homeworld.

The gathered crew in the Ecodome gasped as one.  It was immediately apparent why Nibiru was known as the “Eye of Horus”.  Literally, it looked like a bloodied eye hanging in space.  Because the hemisphere facing the Dark Star was perpetually irradiated, the lit side this world was warmed into a wide, detailed vista of clouds, seas and landmasses.  In the centre of the hemisphere-wide ocean was an immense, habitable landmass covered in clouds.  Fringed with red ice sclera, the ruddy blue circular ocean was the iris to the central landmass’s dark pupil.

Perhaps some of the other descriptions I've provided in the novel will form a blueprint for further future discoveries!

Katia Moskvitch "A distant Earth-like exoplanet 'could have life'"  30th September 2010, with thanks to David, et al

Other Details from the Book

The Egyptian god Horus is of course a centrally important member of their ancient stellar religion. Born in the sky of Isis (Sirius), each Pharoah was thought to be an incarnation of the god Horus.   So symbolically I portrayed the brown dwarf as Horus (the son of the Sun), Horus also represents the re-born god Marduk, who appears on the spaceship Ezekiel One on it's way to Nibiru. 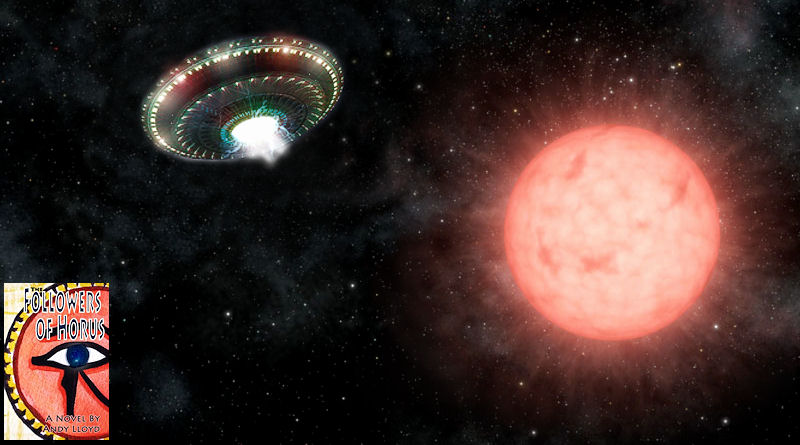 I have only ever come across two references to the Followers themselves - in a book by Adrian Gilbert entitled 'Magi' and in an essay by Freddy Silva's on ancient sites across the globe, built to aid the transformation of an individual into a god.

Freemasons are the modern Followers of Horus, he claims - not unreasonably.

Gilbert's essential idea was that the Biblical Magi were part of a wider brotherhood anticipating the return of the Horus-King. I've extrapolated that concept fictionally to a modern super-secret cult within the Roman Church.  The above image is based upon a scene from the book.  As the black project space mission Ezekiel One nears its goal, a welcome committee from Nibiru approaches. Their interest lies solely with the living cargo carried aboard the spaceship.

The book also involves material about British Intelligence, MI5 and MI6 and, in particular, GCHQ. 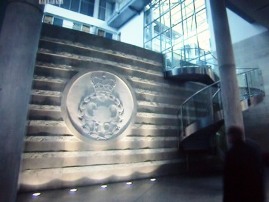 The above images from the BBC's 2012 TV programme 'Modern Spies' provide a further glimpse of life at this super secret base, and the excellent counter-terrorism work that goes on there. 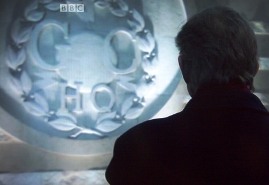 Readers of my book will recognise this scene where the Tall Man enters the main GCHQ building.