We received an intriguing wedding photograph which appears to show a ghostly veil, or shawl, hanging in mid-air!  Although the photo is back-lit, suggesting the potential for a lens flare, the irregular shape of the artefact seems to suggest that this is not a likely explanation. 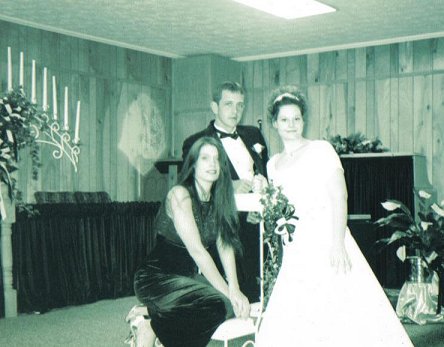 The photograph was supplied to us by Cozy, who came into contact with us through the MySpace social networking website.  She has kindly given us permission to reproduce the picture here for our Gloster Ghosts readers to take a look at.  The original photograph, which is in the form of regular film, is being looked at closely by another paranormal investigation team in the US.  We hope to bring you any conclusions which may arise from their studies. 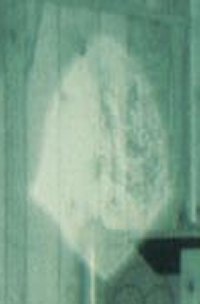 Is this an artefact of the development of the film, or was the wedding attended by something other than the invited group of guests? Is this a photograph of a ghostly Wedding Crasher, or a dearly-departed relative enjoying the special day from the other side?  I asked Cozy what she thought, and this was her reply:

"I was adopted and I didn't meet my biological mother till I was 24. I had just met my sister in time to be in her wedding. Previous to that- I did take care of my biological great grandmother in the nursing home. I remembered her name because she was my first patient in nursing school. When I finally met my mother- I was really shocked to learn that it was my great grandmother- so I did get one day with her before she passed away. She used to wear a shawl- so I think maybe it is her. This image did not show up in any other wedding picture."

Here's a completely different phenomenon caught on camera, sent to me by my MySpace friend Tony, who's a big fan of the Dark Star Theory. 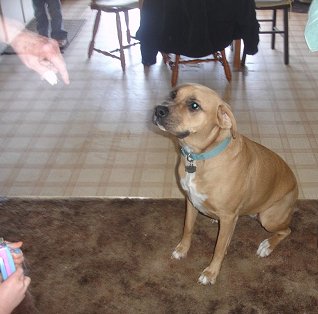 The image shows a semi-transparent hand to the right of the picture.  It appears that the dog, centre, is looking towards the 'person' connected to that hand.  Here's what Tony has to say:

You have to check this out. We went to a friends house to see a dog that was just adopted from the animal shelter. Look at this photo of "Molly". This was taken on a Sony Cybershot 7.2 megapixel digital camera.  I swear on my honor that there has been no editing what so ever. Look at the hand. The dog was acting a little strange. Now I know why. I have never had any photo of this type with the THOUSANDS of pics I've taken on this digi cam.

I am freaking out here. The hand is of a person of advanced age, just look at it. No one present was over 39 years old.

It is truly an enigma that I cannot explain.

Okay, we can rule out  a double exposure because this is a digital photo.  My best shot with this is that the picture was taken without a flash and had a relatively long exposure time because of the poor lighting in the room.  During the exact moment of the exposure someone moved their hand into view.  Because of that movement, part of the background is captured, along with the hand over the top of it.

But I wouldn't want to place a bet on that explanation.  As Tony says, the hand is not recognisable as belonging to anyone in the room, and the dog was behaving oddly.  So there may be a less plausible explanation to consider - that he really has caught a ghost on his photo.

The Wisps of Workers Past

Here's an intriguing set of wisps against a particular wall in an office.  The person who sent these pictures, Kimberley, had this to say:

"I had the lights on in some pics and the lights off in some pics.  I tried taking pictures again another night and did all sorts of angles and other variations of that one area but nothing came out that time around.  They used to mess around with lights. 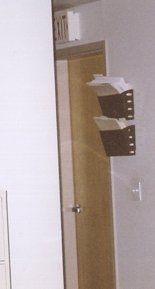 "I think they just wanted to be acknowledged and now that I have they leave me alone.  I wasn't bothered by it, sometimes freaked out, and now I miss them.  The area where my office is built on top of used to be a church, among other things.  And an employee of ours, years back, lived across the street from our office, and she fell asleep with a cigarette or something and burned to death. 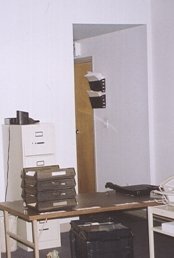 [Another lady] was a workaholic and not very nice.  The area where she used to stand and look out on the shop floor, she's been seen standing there, and that's the area where all of those things came out in the pictures."

Now, if there was a lighting condition common to all the pictures, I'd be tempted to say that these wisps of light were due to a reflection of light onto the wall and door, perhaps off one of the shiny surfaces in the office.  For instance, the top of the black box under the table looks pretty shiny (is it an overhead projector?)  and it might be reflecting light from the window onto the wall at an oblique angle.  However, because there is quite evidently a different lighting condition in the middle picture, with much less direct light into the room, I cannot be certain of my explanation.  Some experimentation with the light coming through the windows, or moving pieces of equipment around when these wisps appear would prove things yay or nay.  The electrical activity with the lights is certainly an interesting aspect in this case.

If I was a ghost, I could think of better places to haunt than my old workplace, though, couldn't you?  Perhaps that's why the Buddhists call ghosts 'Pretas', or 'unhappy ghosts'.

With photographs reproduced with permission of Cozy, Tony and Kimberley.