A Mysterious Orb near Wrexham

A correspondent called Glyn sent us a very strange photograph taken in August last year.  The time was just before midday on 21st August 2004.  The location is a hillside about 5 miles south of Wrexham, and is of some importance to Glyn because the ashes of one of his relatives were scattered here.  The left-hand image is the complete photo, and the bright orb shown has been shown in close-up to the right.  The image is entirely unaltered: 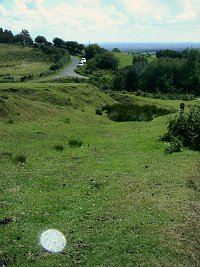 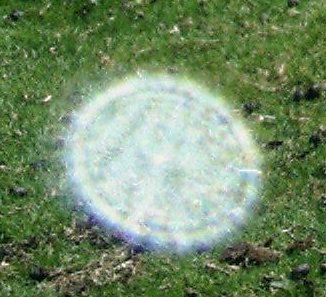 We saw a very similar orb to this in a picture taken in Gloucestershire, by a man visiting his mother's graveside.  However, that particular orb was taken during a flurry of snow, so could be readily explained by the weather.  Unfortunately, we are not at liberty to publish that particular photograph.

The images shown here, taken near Wrexham, does not avail us of the same solution.  The orb is surely too bright and isolated to be a lens flare (although there may be some reflected light from the cars along the road ahead).  A flash was not used, so this is evidently not reflected light from a dust particle, or anything like that.  To all intents and purposes, this is a highly mysterious image.  Glyn, the photographer, claims some contact with spirit, and is interested in the paranormal.  One wonders whether he has inadvertently photographed a spirit present with him, as he visits the resting place of his relative's remains? 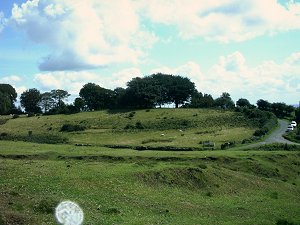 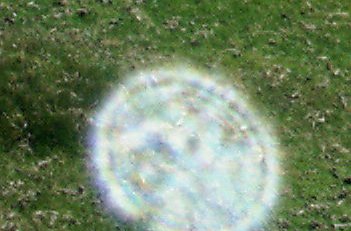 Glyn has sent through a second photo, this one taken just 2 minutes after the first, and at a different angle.  Again, this shows a very similar translucent orb (but not exactly the same!) taken without a flash, in broad daylight.  As an aside, orbs such as these bear a close resemblance to the controversial 'UFO' photo taken in Bonsall, Derbyshire some years back. 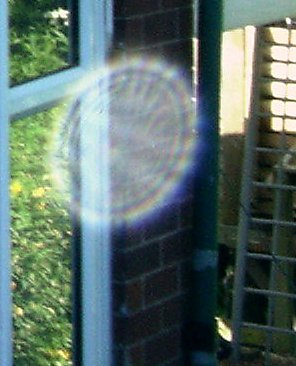 Here's another example of an orb taken by Glyn, this time whilst fixing his fence in his back garden.  This was the only orb to show up in a series of about 9 digital photos taken at the time.  Note the similar pattern structure to the previous orbs, and the angle of the orbs with respect to the direct sunlight. These observations suggest that the orbs may be lens flares whose structure is determined by the internal mechanism of Glyn's camera.

Our last page showcasing paranormal photos taken by readers included some sent by a British Buddhist named Trevor.  He recently went to Portugal on a trip to promulgate knowledge about Therevada Buddhism amongst the Portuguese.  He took several sets of photos containing orbs, some of which were taken during the daytime, without the use of flash photography.  This particular photo is quite exceptional: 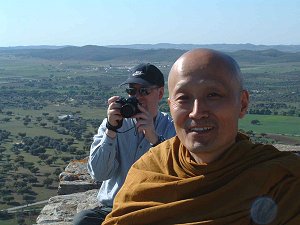 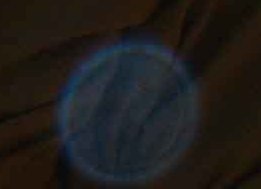 It is worth comparing this daytime orb with the Wrexham one in the article above.  They show very similar features indeed. So, is this a lens flare generated by direct sunlight from the left of the picture? Or was this Buddhist group visiting Portugal travelling with others, unseen?  Here's what Trevor has to say about the expedition:

"We were invited by a Portugese Buddhist society, myself, anagarika Eduardo (Postulant in white, and the other photographer, who was also Portugese and looked after us) and Ajahn Nyanarato (Japanese origin) . We held a weekend retreat in Porto and Ajahn Nyanarato (18yrs in Robes senior monk, and my mentor when I was in Robes myself) gave some talks in Lisbon and Porto. We were well received by the people and everyone was very interested as they have had only Tibetan and Zen Buddhism there up to now. Theravada is a more straightforward and practical teaching, closer to the original way taught by the Buddha Himself, so the reason for us being there was important and even historical maybe, so this is perhaps one reason why we had such a good presence of Orbs. But that's just my own reasoning!" 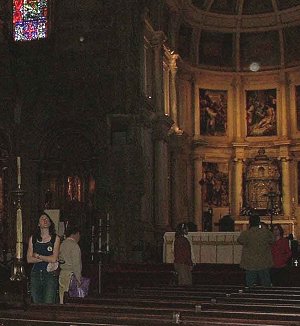 Trevor took a series of photos inside the Jeronimo Monastery, Lisbon.  The orbs picked up are familiar, being similar to the ones we often capture on our paranormal investigations around Gloucestershire.  Perhaps they are dust particles picked up by the flash, although they are persistently found on the entire series.  The picture above is typical. 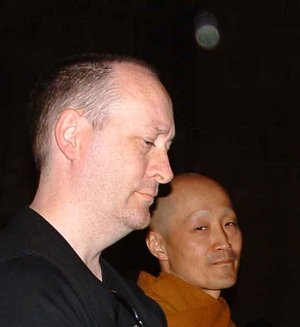 But in case a physical explanation seems just a little bit too self-evident, you might want to consider the image above carefully, taken whilst in the same setting.

Kathy from Las Vegas sent a selection of her favourite orbs, and also a possible 'Shadowman' image, which seems to be a more rare occurrence.

In the above picture with the dog, the left hand orb might be dust.  But compare it with the brighter orb to the right, which appears to be in motion.  This seems a rather unusual object, semi-luminous and coloured. 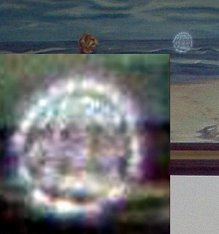 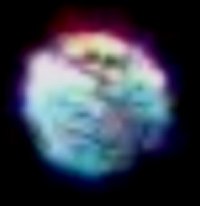 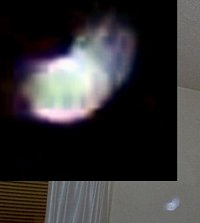 Some of these orbs have been blown up and rendered with a selection of paint-packages by a friend of Kathy's.  Like an old familiar recipe, the exact compliment of photo-suites used is a closely guarded secret, it appears.  Certainly, the images are knock-out.  We particularly like the third orb, which seems to contain a strong visualisation of a human face. 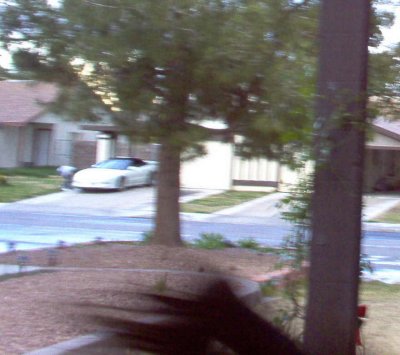 Is this a "Shadowman"? To our eyes, the depth and timbre of the colour of the shadow does not work within the general context of the rest of the photo.  It seems anomalous.  Does anyone else have Shadowmen images out there to compare with? 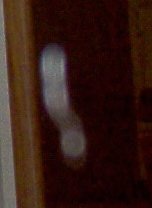 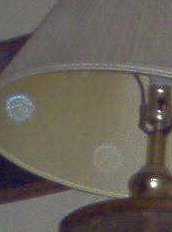 Thwe following orb image has been rendered with a paint package, but is illuminating nonetheless. 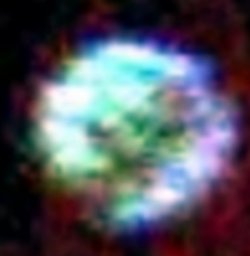 The hues are quite spectacular.  Is this some kind of portal through which the spirits beyond move into our reality?  It's hard to say, but the aesthetic of the orb is remarkable in itself.  A mandala, perhaps.

Ghost on the Farm

This photo was taken by Sean Inglis at his farm.  He has sent us further close-up image of some of the orbs in this, and other digital images. 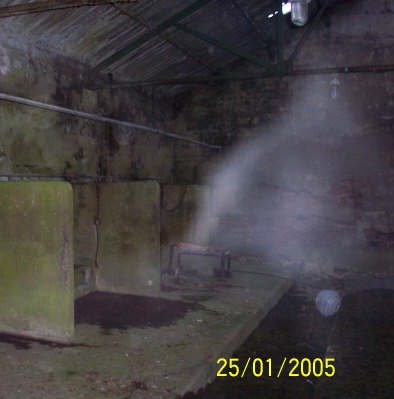 There are parts of this barn which Sean feels uncomfortable entering at night, and photos taken nearby after twilight have picked up orbs.  The above image is superb, though, and seems authentic enough given Sean's correspondence with us.  So make of it what you will; is this a bona fide ghost caught on camera?

Here are some remarkable photos absolutely crammed full of orbs, taken during a visit to a graveyard. 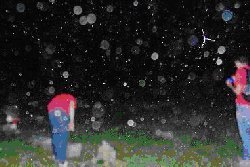 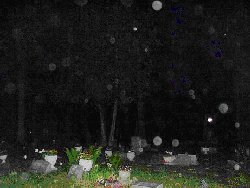 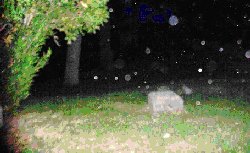 The clothes worn by the gentlemen shown would indicate that it was a dry evening, which rules out water droplets as a source for these orbs.

Chaz Brand, one of those present, writes: "The photos were taken in Oak Grove cemetery ( the old one on the right hand side off I-69). We pulled up and we got out and we immediately start snapping photos, we got lots of orbs right off the bat, we went to the witches pit ( supposedly where a women was set afire back in the early stages of my town).  The pole where she was tied still stands and it is burned like it was in flames.

"I tried to do an evp with a little 1 minute voice recording on my friends digital camera but we got nothing, just orbs.... For the feeling I think we were all a little scared we didn't hear and voices all three times we tried to do an evp.   As far as I know a couple pictures are faces.. One in the leaves and one just over my head.. we didn't see any human figure of a ghost or anything like that.. but the orbs it was like a party or something; they were all out chit chatting with each other, having a good time.. it was a really cool feeling... they were all taken after 10:30 PM"

I don't have much information on these photos, but these is a possibility that the orbs were generated as lens flares from the bright yellow reflected light from the pick-up truck. 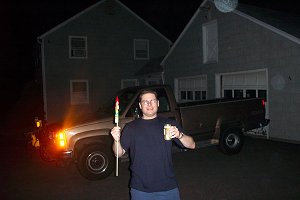 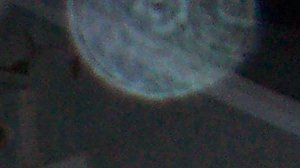 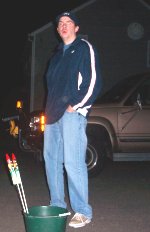 Again, the structure of the orbs could be a result of the internal dynamics of the camera.  However, the photos were taken with a flash, and the yellow light source that would have to have created these 'flares' is simply reflected light from the camera flash.  Would this be sufficient to create such strong lens flares?  I'm not so sure.

"Hi Andy.  I'm an avid reader of your Dark Star website. I know you go ghost hunting a lot so I figured this picture might be of interest to you. Its from my brother and his wife's trip to Amsterdam. The orb is huge. 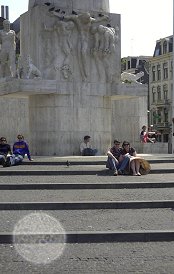 "All of the pictures were taken with a Cannon Powershot S400, sometimes the flash was on other times it wasn't. Most of the orb pics were taken in the New Church (despite its name it is still 600 years old).  My brother also claims he scoured the pictures right after he found the first orb and that since then more orbs have appeared in the pictures, like they all know it's okay to show themselves to us now. He also took a lot of pictures at the Old Church. He said no orbs appeared in those photos though. 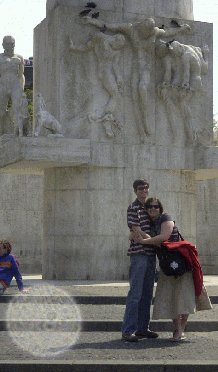 "If you look at photos 1 and 2 it looks like the same huge orb in both pictures. I was worried that it was in the same spot and that would make it a smudge or something but it actually moves up and to the left in the second picture. My brothers wife thinks that its her grandmother and that it wanted to move closer and be in the picture in photo 2. Her reasoning behind this is that her grandmother is Dutch. Just something to think about. I also found it interesting that there are orbs of different colours, which should rule out dust or waterspots."  Name withheld

I also find it interesting that the light orb effect is repeated in the two photos.  The light is coming from behind the couple, to their left, the photographer's right.  Are these lens flares?  Look at the shape of the orbs; their 'fingerprint' seems exactly the same.  That's odd.  Here are some more pictures, this time taken in churches in Amsterdam:  his touring relatives clearly enjoyed visiting the religious iconography of the city: 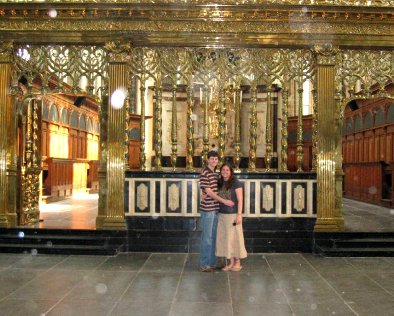 I love this picture.  There's so much going on; fast moving orbs, coloured orbs, faint but large orbs and remarkably light reflections on the floor.   If the church is just dusty, then the pristine, shiny floors certainly don't give that impression. 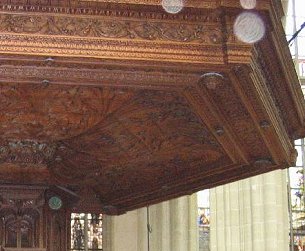 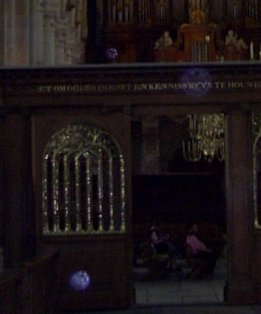 Again, some really strong, coloured orbs.  The purple orbs to the right have dark patterns within them, reminding me of stained glass.  Indeed, in the complete photo there are windows high up on the right hand wall. although it's not clear whether these are stained glass or not.  Are these lens flares picking up the colour and refraction patterns of the stained glass windows?  Perhaps.  There remains the possibility that the church is host to spirits.  They certainly are beautiful orbs, aren't they?

With thanks to Glyn, Trevor, Kathy, Sean and Chaz.