The Red King and the Rubedo

In recent web-pages posted on the Dark Star Theory site, I have shown how ancient knowledge of the 10th Planet 'Nibiru' might underline much of the arcane symbolism used by the Alchemists. 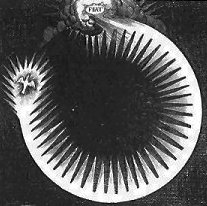 To use modern astronomical parlance, Nibiru appears to be a 'sub-brown dwarf', or 'light-emitting planet' several times the mass of Jupiter.  Its advanced age has meant that it no longer shines in the visible spectrum, but is more like a hot gas giant.

Nevertheless, upon returning to the planetary zone, its close proximity to the Sun and other planets excites the sub-brown dwarf, and results in a colourful coronal discharge, similar to the powerful brown dwarf 'flares' discovered by astronomers (1,2).  The solar wind sweeps this coronal discharge back (3), in a similar fashion to the comets, resulting in fiery wings. 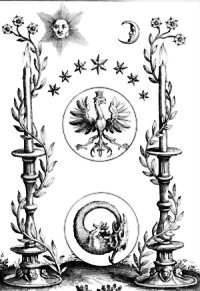 The Phoenix mythology has resulted from this incredible display, as well as the 'son of the Sun' and 'dying-and-rising god' myths.  Nibiru brings with it a contingent of 7 moons, a relatively small number when considering the families of satellites orbiting the gas giants Saturn and Jupiter.

These moons are lit by the red light of Nibiru when in its excited state at perihelion (its closest approach to the Sun), and appear as seven stars.  It is probable, given the iconography depicting the Winged Disc, that two of these moons are much larger than the rest, and are particularly noticable from Earth, in a similar way that Jupiter's 4 Galilean moons are visible through binoculars, in contrast to the other 12.

This alchemical image shows 7 stars above a crowned eagle (4).  The seven stars are understood by esotericists to stand for the visible planets: The Sun, Moon, Mercury, Venus, Mars, Jupiter and Saturn.  But here we have them displayed around the eagle, and the Sun and Moon are already in the field.  This makes little sense when analysed conventionally (whatever 'conventional' means when discussing Alchemy!).

But when the Eagle is understood to depict the 'son' in the celestial trinity, then the seven stars accompanying this crowned bird could well indicate dark star symbolism.

There are parallels to be made with the 'Talisman of Orpheus' also.  Sometimes the Crucified King was even depicted in the form of the imperial eagle: 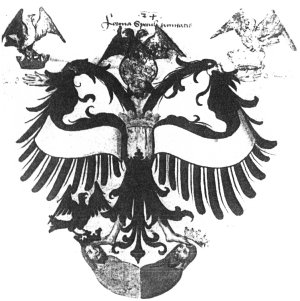 The alchemical Winged Christ bears some resemblance to the Winged Disc, as the crown is distinctly disc-like, and the two crowned figures below could be associated with the uraei. 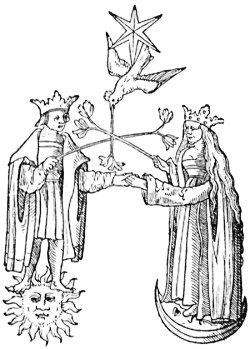 The alchemical image above brings the celestial trinity to mind, with the inclusion of the Star of the Hermes Bird.  Again, a winged star is implied.

In Alchemy, the 'work' is divided into four quarters, and these are denoted by colours.  The first is the 'Blackening', associated with a watery albedo.  I suggest this is equivalent to the darkness of the Primordial Deep.  The second is the 'Whitening' (symbolised by a white rose), and the third with the 'Yellowing' which is "represented by an eagle winging towards the Sun".  If the opus is simply connected with the motion of the Sun around the Zodiac, then what of the focus upon this winged eagle?  Could we be receiving knowledge about the appearance of that other hidden 'sun', Nibiru? In other words, Nibiru comes out of the darkness, initially appearing as a white, Jupiter-like planet, then becoming more yellow as its stellar character begins to become excited.

Fabricius has the following to add:

"Speaking of the circular work and its fuel, an alchemist says: 'The fire is enkindled by an invisible sun unknown to many, that is, the sun of the philosophers'..." (4) 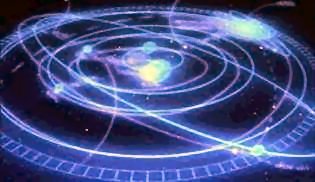 This astronomical allusion is strengthened by the symbolism of the Ouroborus, the dragon/serpent who eats its own tail.  We can clearly see this imagery used with the Imperial Eagle depiction above, and this 'Uroboric symbol' is said to be central to the fourth and final quarter of the alchemical opus.  This fourth quarter, which completes the work, is the 'Reddening', or Rubedo, and is associated with a 'glowing lion'.  The Lion is a solar animal in its own right, but it also takes the form of Chnoubis, whose imagery follows the now familiar syncretism of solar and serpentine symbols.

In other words, its solar characteristic may have become embedded in the duality of this dark sun.  As Nibiru moves nearer to the inner planets of the solar system, its countenance becomes blazing red, appearing either as a winged firebird, or a fiery comet, depending upon its relative position with respect to Earth and the Sun.  It became the dark solar serpent of Gnostic syncretism two millennia ago.

The most beautiful iconography that Alchemy has to offer is in the form of the 'Splendor Solis':
"The earliest version, considered to be that now in the Kupferstichkabinett in the Prussian State Museum in Berlin, is dated 1532-35, and was made in the form of a medieval manuscript and illuminated on vellum, with decorative borders like a book of hours, beautifully painted and heightened with gold.  The work itself consists of a sequence of 22 elaborate images, set in ornamental borders and niches.  The Splendor Solis was associated with the legendary Salomon Trismosin, allegedly the teacher of Paracelsus." (5) 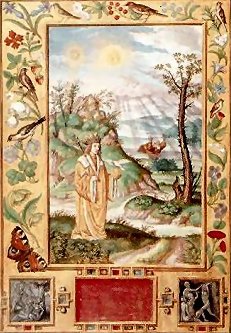 There is a series of three images in the Splendor Solis that encapsulates the perihelion transit of Nibiru wonderfully.  The first is that of the 'drowning king', denoting the fate of the old king, seen here in the background of the landscape.  In the foreground is the young new king.

These two kings are symbolised by the appearance in the sky of two suns!  To ensure that we do not miss the importance of this image, the new king is to be seen holding a red disc, upon which is the Hermes Bird (some have understood this to be a red apple).  In his other hand is a sceptre, and seven stars are to be seen glittering around its end (although this image unfortunately has not picked up this important detail).

To me, this quite evidently denotes the appearance of the hidden sun, characterised by the young king with his winged red disc and seven stars.  In fact, I don't think this could be clearer.  Other commentators might prefer a more esoteric meaning, and they are welcome to read all kinds of wonderful ideas into this painting.

But the source of the celestial symbolism seems to be the perihelion appearance of Nibiru and its moons.  This assertion is supported by the next two paintings in the series, whereby the disc appears to redden and eventually amalgamate with a familiar stellar goddess. 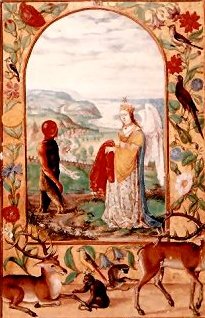 For alchemists and later esoteric commentators, the source of the 'red slave' seen here remains somewhat of a mystery, as does the nature of the peculiar red disc emblazoned upon his face.  Fabricius places this image within a psychoanalytical context:

"In a remarkable manner, the white woman or angelic queen is depicted as pregnant with her approaching lover, thus expressing the strange Hermetic marriage in which the bride is sister and mother, and the spouse is father, brother and suckling rolled into one."  (4)

Well, this might please those of a more Freudian bias, but I prefer a much simpler explanation.  The white queen is crowned with a five-pointed star, and is evidently Isis, denoting Sirius (6).  The red figure is the returning red planetary disc of Nibiru, climbing out of the darkness of the Primordial Deep.  In other words, Nibiru is brightening and reddening as it approaches Sirius.

The pregnant Isis is even holding a red cloak for the approaching Horus, or Nibiru, implying that the brown dwarf is about to become glorified by a red cloak (its coronal halo), as it flares up during perihelion.  Around 2000 years ago, this celestial cloak created the 'red Sirius' anomaly. 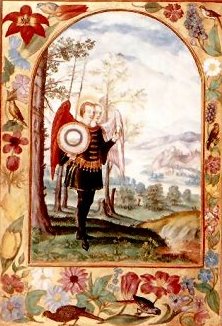 This is where one of the most wonderful images of Alchemical allegory comes into play.  As the brilliant brown dwarf casts its red cloak over the Dog Star, there is a fusion of Mother and Son as Isis and Horus join to become a celestial hermaphrodite, or 'rebus'.  This may only have lasted for a matter of days, but the conjunction of the 10th 'Planet' with the brightest star in the sky must have been an awe-inspiring spectacle.

In previous web-pages, I have looked in some detail at how this rare astronomical event became the seed from which would grow some of our most important religious and mythological ideas.  This takes us beyond the resurrection and rebirth symbolism, however centrally important that may be.

The celestial conjunction of Nibiru with Sirius leads us to the deeper mysteries.  For instance, its symbolism is noted by the inclusion of the 'Star of Napoleon' inside the Winged Disc on the frontispiece of the 'Description de L'Egypte' (6).

In this third image from the Splendor Solis, the white goddess has combined with the red god, rounding the circle of the ouroborous, and amalgamating the Opposites.  This image denotes the perihelion point of the dark star, and the completion of the Great Work.

"Uroboric symbols of the completed work abound in the rubedo" (4)

Christ and the Eighth Sphere

Just as the various Orders of Freemasonry each reflect different aspects of the attainment of spiritual knowledge, so are the mysteries multi-faceted.  Many Masonic Orders are Christian in character, yet others have a more eclectic appeal, and  the Societas Rosicruciana in Anglia in particular advocates the study of many diverse, often esoteric traditions, including alchemy and astronomy (7).

It may be a shock to many to see Christ demonstrably depicted as a planet in this alchemical image (8), but His presence seems to identify Him as the Eighth Star, or celestial sphere.  Allow me to explain. 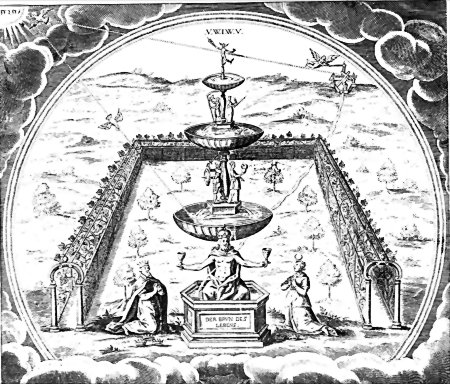 Above can be found the Sun and Moon worshipping Christ within the Philosophers' Garden. Christ is evidently not representative of the Sun. Below them are the five visible planets, marked by their astrological sigils.

The globe of Christ's crown finds itself incorporated into the lower fountain, shaped as a crescent, and this forms the familiar Winged Disc symbol.  He holds two goblets, again in keeping with the two uraei of the Winged Disc emblem.

The 5 planets, Mercury, Saturn and Jupiter, and Mars and Venus, are again depicted within the fountains.  Evidently Christ is an unknown quantity, and is neither the Sun, nor Mercury, nor Jupiter, as they are all present independently.

This remarkable image provides us with a new piece of data; a view of the orbit of Nibiru.  Like a rounded wedge, the Hermes Bird traces a faint line between the Sun, the Red King and a celestial Jerusalem (the Kingdom of Heaven?).  Our elliptical orbit appears to be distinctly wedge-shaped according to the artist S. Michelspacher.  Whether this denotes an egg-shaped cometary path, or is an allusion to the perspective of the orbital path as seen from the Earth, the one thing we can be sure of is this: The Red King of the Rubedo traces an orbit around the Sun, and it does not follow a traditional, roughly circular planetary path.

I will leave it to the reader to decide whether or not this indicates Christ's actual equivalence with the Messianic Star.  I am quite convinced that the original Christian mystery revolved around the conjunction of Nibiru at perihelion with Sirius.  It was an adaptation of the ancient Egyptian mysteries of Horus and Isis.

That knowledge became heretical as the Romanised cult of Jesus attained greater power, but we can still access its original symbolism through the works of the alchemists and the Rosicrucians.  No doubt more remains to be discovered in the most secretive of Masonic Orders, but from what evidence is openly available I find this case increasingly compelling.

4)  Johannes Fabricius "Alchemy: The Medieval Alchemists and their Royal Art" "Between the marriage of Sol and Luna the tail-eater coils up in his primal cell, thus completing the opus circulatorium in the sign of the imperial eagle and the sevenfold planetary star."  p193, also p14-5, 94 Aquarian 1989