The Celestial Cross and the Talisman of Orpheus

Stunning physical proof has recently emerged to indicate that the Christ figure is not only intimately connected to Paganism, but also to the Winged Planet.

The Pagan roots of early Christianity are coming ever more obvious to scholars, and the material that supports this viewpoint is creating plenty of ammunition for popular books.  Two researchers, Freke and Gandy, have written a well-documented text describing the extensive similarities between the Christian ‘mythology’ and earlier Pagan versions, in particular the ‘godman’ Osiris or Dionysus.  Their focus in “The Jesus Mysteries” is the mystical root of Gnostic Christianity, and its evident links with many secret mystery schools prevalent in Egypt, Judaea and Greece (1).

They are not pursuing an astronomical connection in their own research, but have inadvertently uncovered a piece of evidence that could prove pivotal to the case for the Dark Star, and its connection to the advent of Christianity.

The object in question is a third-century amulet, a picture of which they found “tucked away in the appendices of an old academic book.”  The dating of the amulet is important, because it pre-dates the Council of Nicaea, which saw the establishment of modern Christian doctrine under the auspices of the Emperor Constantine.

The amulet itself is now lost, having disappeared from the Museum of Berlin in the Second World War.  However, a plaster cast still exists, showing a figure undergoing crucifixion, with accompanying Greek words.  Freke and Gandy explain the implications of their find:

“It shows a crucified figure which most people would immediately recognise as Jesus.  Yet the Greek words name the figure ‘Orpheus Bacchus’, one of the pseudonyms of Osiris-Dionysus.

"To the author of the book in which we found the picture, this amulet was an anomaly.  Who could it possibly have belonged to?  Was it a crucified Pagan deity or some sort of Gnostic synthesis of Paganism and Christianity?”  (1)

This seems to confirm much of what has been said about the original interface between the Messianic tradition of Judea and its earlier version in Egypt and elsewhere, but this is not the reason why I was knocked out by this amulet!  Above the crucifix is a crescent ‘moon’ facing downwards, surrounded by a semi-circle of 7 stars. 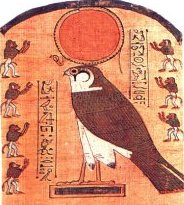 The appearance of this extremely odd celestial arrangement goes without mention in “The Jesus Mysteries”, presumably because the inclusion of these stars and crescent on this amulet has, in turn, dumbfounded its two authors.

Let us be clear; there is no constellation with a perfect semi-circle of 7 stars.  This is not the Pleiades star cluster in Taurus.  The 7 ‘stars’ are arranged perfectly around the crescent, unlike the famous ‘seven sisters’.  Even if one were to assume that it was the Moon in conjunction with the Seven Sisters, with a tremendous amount of artistic licence, what on Earth is this motif doing on a 3rd Century amulet of the crucified Christ-Osiris-Dionysus? 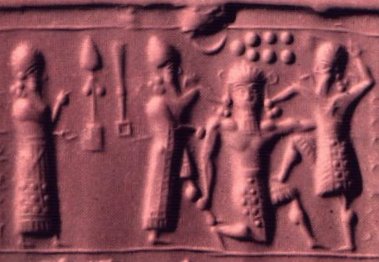 Another possibility immediately sprang to my mind.  You may recall my earlier discussion of the appearance of the Nibiruan system at perihelion.  Not only would Nibiru be visible as a small red disc, but its moons would also be sufficiently illuminated by the Sun and the dim light of the dark star to be naked-eye objects.

The number of moons in the Nibiru system is not established with absolute certainty, but the depictions of the Winged Disc on Sumerian cylinder seals generally show seven small circles in the motif.

Sometimes these 7 circles are to be found in the wings, sometimes in the ‘tail’ of the cross-like Winged Disc. How would Sumerian observers on Earth have seen the moons of a brown dwarf that approached no closer than the orbit of Mars?

Jupiter’s four Galilean moons are visible with a pair of binoculars, and tend to appear in a line extended through the equator of their giant parent world.  Jupiter is more distant than Nibiru at perihelion, and gives out no light of its own.  One would expect that its satellites would be less well lit than Nibiru’s as it swings around the Sun.  Nibiru’s moons are likely to be bigger than Jupiter’s (if for no other reason than the dark star is a more massive planet).  At least one of the moons must be of planetary proportions.  The Nefilim were known to be giants, so a larger humanoid body-frame would tend to indicate a smaller gravity on their own world, making it smaller than Earth.  But it must clearly be much larger than the largest of the moons of Jupiter, Ganymede.

So we have larger satellites likely, for a larger parent ‘planet’, which are seen closer to us than Jupiter during the brown dwarf’s perihelion, and are lit by two separate light sources.  It is not unreasonable to suppose that we would see the moons as a celestial neck-lace around Nibiru with the naked eye.

Nibiru enters the planetary solar system in a plane deviating 30 degrees from the ecliptic, and then moves around the Sun in a parabolic arc.  If the halo of the dark star is created by its corona being swept back, away from the Sun, by the action of the solar wind, then the ‘wings’ will be perpendicular to the direction from the Sun to the brown dwarf.  As the dark star arcs across the sky, its wings will rotate with respect to the Sun’s direction, in a similar way that the tail of a comet will always be swept back from the Sun.

However, the position of the moons will depend more on their relative orbital planes around the brown dwarf, of which we know next to nothing.  Potentially, then, there will be a variation in the 12th Planet’s appearance as it moves through its perihelion passage.  The position of the moons will vary, and this might explain why they are sometimes depicted in the wings, sometimes in the tail.  The Nibiruan moons would not necessarily appear in Nibiru’s equatorial plane, but at an angle.

So this might account for the anomalous 7 stars on the amulet, but what of the crescent? I suggest this is the arc of the Winged Disc’s halo, or wings.  In the same way that the central disc of a comet is lost within its extensive tail, the wings of the dark star’s halo will be a more prominent feature than the disc of the brown dwarf itself. 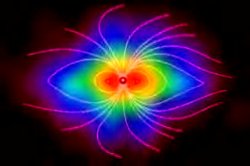 The disc is always depicted within the wings in the Egyptian motifs, and is sometimes left out altogether in the Mesopotamian motifs.

The 12th Planet is sometimes drawn as a cross rather than a disc, and this might reflect the juxtaposition of the winged halo and the plane of the orbiting planets.  Within this halo is the red light source of the dark star. 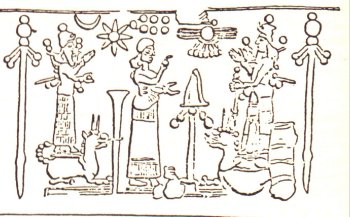 The Talisman of Orpheus represents this cross-like depiction of the 12th Planet, but upside-down.  The crescent is the winged halo, the seven stars the seven moons in the tail.  There is a clear example of this complex form of the Winged Disc motif in Sitchin’s “The 12th Planet” (2).  Rotate the symbol 180 degrees and the astronomical symbolism of the Talisman of Orpheus becomes apparent.

There are some very ancient Egyptian motifs from the pre-dynastic era, that show a falcon perched on a crescent Moon (3). I suggest that this signifies a similar symbol.  The falcon signified the god Horus, and may be equated with the fire-bird, and we have seen how this god is significant to the Messianic tradition.  Nibiru’s appearance as a fiery crescent would surely indicate its equivalence to the Phoenix of Egyptian mythology, as I have already described.  The ‘Winged Disc’ might truly take on the appearance of a fiery celestial bird or dragon as it approached the mighty Sun. I believe that the ‘Talisman of Orpheus’ is a more modern representation of this same ancient symbolism.

The Egyptian symbol for Horus has simply been replaced by the equivalent Hebrew symbolism of a semi-ellipse of seven stars.  But the meaning is the same: The Dark Star and its moons in the form of the Winged Disc.

This amulet, now lost to us, visually captured the essence of  ‘Jesus Mysteries Thesis’ so well for Freke and Gandy that they put its image on the front cover of their book.  But its significance goes beyond drawing conclusions about the mystical Pagan roots of Christianity.  It simultaneously combines this important insight with an anomalous astronomical phenomenon that appears to indicate the Winged Disc’s role in the mystery of the ‘dying and rising god’.

This small amulet survived the thorough purge of Gnostic Christian heritage by the Church Fathers.  Is it possible that it was once one of many, many such items, all testifying to the celestial phenomenon that became equated with the appearance of the Messiah?  Was this the secret central to the early Christian mysteries, a message so repugnant to later Christians that they were driven to eradicate it completely?  If so, it is fortunate for us that this one seemingly insignificant item of 3rd Century jewellery survived.  It seems ironic to me that such a small amulet should bear such a profound message: Nibiru, the Messianic Star, had returned, signifying a new era in the history of Mankind.

There are many accounts in the Roman texts of anomalous celestial phenomena.  Whether these should be taken as indicative of unusual astronomical events, the appearance of UFOs or misunderstood natural phenomena is the prerogative of the reader.  Of interest is this account by Cicero from ‘De Divinitate’ who speaks of “the time in which two suns were seen…and when the sun of the night was seen, when noises were heard in the sky and the sky seemed to split and strange spheres appeared in it” (4).  Plutarch tells us that the murder of Julius Caesar (44BC) was accompanied by the appearance of a comet, and of ‘extraordinary celestial fires’ (4).  Perhaps the later extraordinary spectacle of the appearance of Nibiru was posthumously linked with the death of this most famous of Roman leaders.

The Italian author Peter Kolosimo describes coins issued by the Romans of the 2nd Century AD that depict a strange ‘star’, or sometimes seven such ‘stars’ (4).  The period of time alluded to by the coins is unknown. One such coin, minted by the emperor Pertinace, minted in 193 AD, clearly shows a rather odd celestial globe.  A woman, or goddess, is the central figure on the coin, and she is lifting her hands towards the bizarre ‘star’.

Does she represent Sirius, in keeping with other female deities?   The globe has an asymmetry about its four rays that preclude its representation as normal celestial bodies: “Many experts, after careful examination of the money, agreed that the object represented neither the sun, the moon nor any of the heavenly bodies. This certainty stems from the fact that the sphere’s rays were arranged in a manner quite different from that usually used for the stars.  Besides, the term ‘Providentia deorum’ leaves no doubt, since the faces of the coins clearly express an exaltation of the gods’ providence”.  (4)

The Winged Disc is often depicted with a cross whose vertical aspect increases in width.  Take the images of the Assyrian god Assur and the Median god Ahura Mazda.  What is common to these images of major deities is that the god takes centre-stage on a celestial cross.  The dynastic Egyptians placed a solar disc in the place of Horus, while the Christians present us with the same format, but this time with the crucified Christ.

The Roman coin shown here has the same shape, albeit upside-down, as these celestial crosses, but the Romans don't seem quite sure about what it all means.  Many in Rome invoked the Persian god Mithras, and eventually Christ.  But I suggest the interrupted appearance of the celestial 'fire-bird' during Roman times, in the form of the dark star Nibiru, was the original precursor to this historic deification.