I consider this page to be a rather special addition to the Dark Star Theory web-site.  I've been researching Nibiru for several years now, and have proposed various ideas that have, on the whole, captured the imagination of readers eager to find out more about the tenth, as yet, undiscovered 'planet' in our solar system.

Among my findings is the idea that Nibiru is a brown dwarf, a failed star capable of emitting only the faintest reddish light, but whose gravity and infra-red energy emission is sufficient to warm its habitable moons.  These moons number 7, it seems, and the infrequent perihelion passages of Nibiru are associated with the 'return of the gods'.  When Nibiru is in close proximity to the Sun, both these bodies become excited by each other.

The brown dwarf, in particular, becomes 're-lit' from its slumbering embers and 'flares up' with reddish light.  The coronal discharge emitted is then swept back by the action of the Solar Wind, giving the appearance of fiery wings whose flight is directed towards the Sun!

My other major proposal is that Nibiru appeared during the Graeco-Roman period, more specifically marking the beginning of our modern era.  I have shown that the fiery crescent and seven stars have been depicted next to Pagan representations of the crucified godman, thus implying that the rebirth and death of the Mesopotamian 'Celestial Lord' provided the source for the emergence of Early Christianity and other similar cults of the time (see Darkstar9).

My continuing research has now led me to a dusty series of tomes known as 'Jewish Symbols in the Greco-Roman Period' by Erwin R. Goodenough (published in 1953 for Bollingen Foundation Inc by Pantheon Books of New York).  Volume III contains a myriad of illustrations, most of which do not pertain to my particular studies.  However, there are a number of amulets included there that are of tremendous importance, and I consider these to be particularly persuasive.  I present them here and invite comment.  For those wishing to consider the origins of the symbolism in greater depth, I recommend the previous page 'Nibiruan Symbols' (see Darkstar17).

N.B. The numbers included in the following images pertain to the references in the book's text: 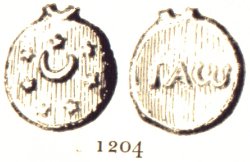 The crescent is shown surrounded by a circle of seven stars, evidently preventing us from concluding that this represents the crescent moon in either the Pleiades or the constellation of the Northern Crown.

I assume the letters to be Greek, and are iota alpha omega.  This combination of letters appear time and again in these amulets, and I would welcome input from anyone conversant with ancient Greek who can clarify their meaning.

The crescent and seven stars are now found associated with the constellation of Leo.  I have presented evidence that a similar depiction on a monument in Turkey can allow us to date the appearance of Nibiru around 2BC, and that this event was associated with the expected 'return of the gods' (see Darkstar16).

The combative serpent-legged cockerel also makes several appearances on the amulets, and is associated with the same Greek letters, here seen in mirrored form. 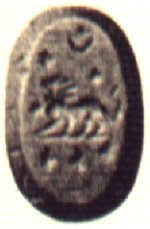 
It is a little difficult to make out the details of this tiny artifact.  However, seven stars are evident, complete with the crescent.

I suspect this is a mirror-image, and that the animal is a lion, once again representing Leo.

The detail above the head of the lion is far from clear, however. 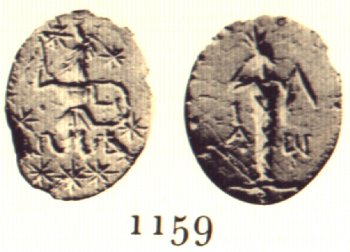 
The serpent-legged cockatrice appears with the seven stars here, but the crescent is less apparent.  The reverse side seems to show a goddess, again quite common on these amulets, and I suspect this indicates a position near to Sirius (Isis, Aphrodite).

For comparison, Fig 5 in the book depicts "Aphrodite or Astarte, Beit Jibrin, Palestine" whose head-dress, or halo, contains a semi-circle of seven stars. 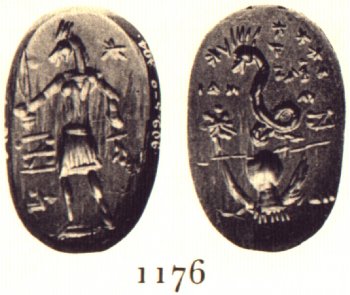 
I think that this is quite possibly the best representation of Nibiru to have so far come to light. Drawing your attention to the right hand image, a celestial disc is clearly evident.  Emanating from this disc are two fiery wings, and there are seven 'talons' completing this celestial fire-bird.

Above Nibiru is the cosmic serpent kosmokrator or Chnoubis (see Darkstar17), with seven rays emanating from his, on this occasion, bird-like head.  The number of stars surrounding the cosmic serpent are less clear, but seven seems a reasonable bet.

Is Nibiru seen as the Cosmic Egg of Chnoubis, then?  There also appear to be 4 wavy lines emanating horizontally from the lower image of Nibiru, in keeping with the Roman coin highlighted in Darkstar9 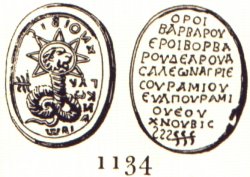 Here's Chnoubis in a more traditional form.  Note the Leonine head appearing above the bindings of the cosmic serpent.  The head of the Lion might indicate the regal nature of the Messianic Star, or simply its initial appearance in Leo.

The coiled cosmic serpent implies a hidden tour of the heavens prior to this perihelion appearance; the dark snake moving invisibly through the cosmic abyss for the vast majority of Nibiru's cometary orbit.  Note the seven triangular rays emanating rom the head of Chnoubis. 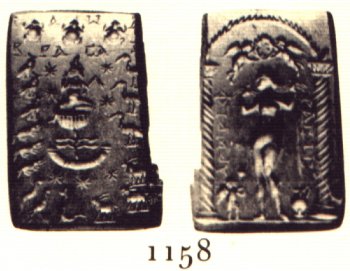 A veritable feast of symbolism is contained on this remarkable artifact.  The crescent and seven stars are clearly evident on the left, and a complex image above the crescent appears to depict Nibiru itself, with the resplendent deity likely to be the divine infant Harpocrates.  Again, the 4 wavy lines are to be seen between Nibiru and the crescent.

What is to be made of the surrounding imagery?  My feeling is that these triplets of fauna represent ancient constellations, and perhaps indicate to us the passage of Nibiru through the heavens.  However, I am open to suggestions on this issue.

The right-hand depiction seems to be Aphrodite/Isis, who stands below a winged disc created by cherubim.  The pillars to either side of the goddess are standard fayre in archeo-astronomy, and were used in many ancient temples to align with stars, solstices etc.  Their apparent function in this case is to visually capture the precise position of Nibiru, the Winged Disc, when at perihelion near Sirius. 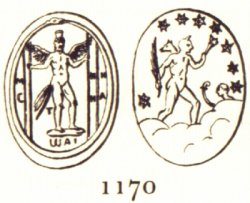 
This imagery is almost demonic in nature, and varies somewhat from the previous images I have cited.  The left hand image shows a bird-man deity captured within two pillars, and associated with iota alpha omega again (mirrored).  This time he is surrounded by an ouroboros.

To the right are the now familiar seven stars, but this time associated with more disturbing imagery.  Perhaps this alludes to the demonisation of the celestial appearance of Nibiru, as depicted in the Book of Revelation.  Part of the drive to quash the ancient Gnostic and Early Christian teachings inevitably involved this kind of demonisation of heretical symbolism.

I include this image of a Menorah, a seven-branched candelabrum used in Jewish worship, to draw the reader's attention to the remarkable similarity between this and the imagery explored above. 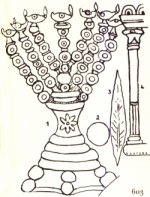 Menorah as part of a synagogue, Dura (603) Archeological Museum, Damascus.

The seven lights of the Menorah could well represent an ancient understanding of the seven moons of the dark star, its shape denoting the orbital properties of these moons.  What is particularly interesting in this image is the inclusion of a prominent central star on the shaft of the Menorah, complete with a selection of crescent shapes. 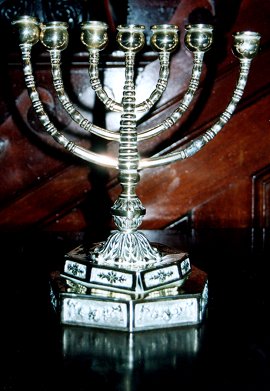 According to Judy Kennedy, the term "Menorah" is linked to the seven "men-horac", meaning moon priestesses.  If this was symbolic of the Pleiades, (the "Seven Sisters" star cluster), then why denote them as moons goddesses? This is an exciting piece of information, as it links the seven candles of the Menorah with moons. This implies Dark Star symbolism.

This magical amulet contains interesting imagery, including the Phoenix adorned by seven rays:

Phoenix with seven rays round head, standing on egg which rests on an altar made of a single column supporting a broad top. Above, scarab; at each side, descending, a bird, a scorpion, a cobra; crocodile under altar.

Chnoubis is linked directly with the seven-rayed Phoenix here, and the animal symbols surrounding the fire-bird are strongly suggestive of constellations.

Thanks to Randy Palmer for forwarding this information.  This amulet is among a collection at the Taubman Medical Library.