Andy's House... and other Haunted Places

There have been many spooky happenings at Andy Lloyd's house, many of them witnessed by Martin Cosnette including ghosts, apparitions, 'shadow people' and orbs.  But he is not the only one.  Andy's wife has had numerous unusual experiences, and even the children have. The house was built in the 1930s.  Whatever presence/s may be in the house, they do not appear to be malevolent, and may actually be relatives who have passed over.  Indeed, there is considerable experiential evidence to suggest just that.  Digital photos taken in the house have shown some phenomena that are certainly intriguing in their own right: 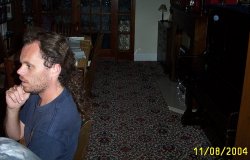 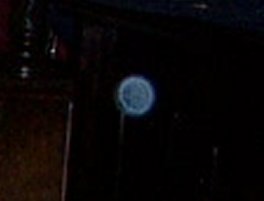 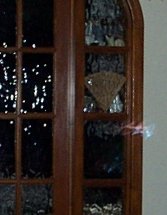 If this is a 'lens-flare', it is a very unusual one:  it seems to be wispy and multi-coloured, suggesting something more bizarre.  Martin asked a local psychic practitioner to take a look at this photo and she saw a woman in this photo with 'speckled hair'. 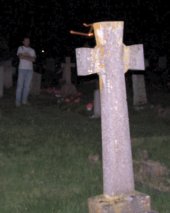 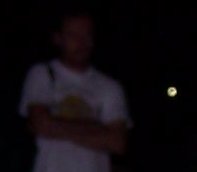 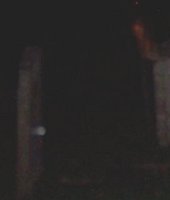 The above digital images of 'orbs' were taken in Prestbury Church graveyard on 1st August 2004. Prestbury Church is on the outskirts of Cheltenham and is one of the most haunted places in Britain with several frequently reported ghosts associated with it.  The orange streaks are certainly due to streetlights in the background, but the orbs are more interesting, as is the reddish haze in the right-hand photo. 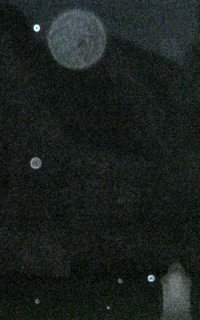 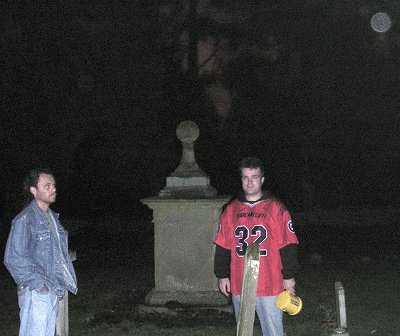 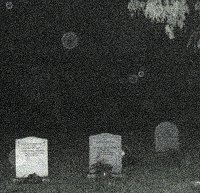 These images were taken with a digital camera in Birtsmorton graveyard, Worcestershire.  The first photo shows numerous orbs with varying degrees of focus and intensity.  Note how the nearest orbs do not appear to be the brightest ones.  The central picture shows Andy Lloyd looking up towards an orb above Dave Cosnette (and ladies, that is a gravestone in front of Dave, so don't get too excited...!).  The right-hand image shows more orbs and also...something... behind a grave-stone.  Take a closer look below! 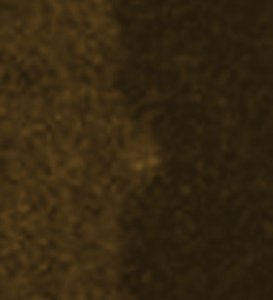 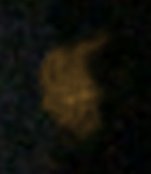 We've processed the above image through the Paint Shop Pro in an attempt to provide an answer.  But we remain confused about what this might be.  Some have suggested to us that this is a lower spirit of some description, and that we should be cautious during our investigations. 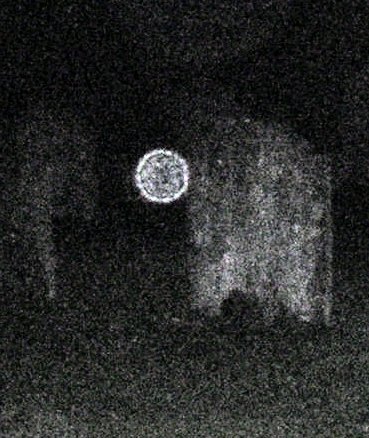 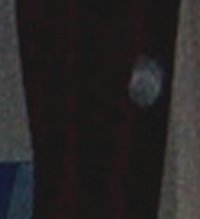 To the left, a final picture of an orb from the graveyard, and to the right an apparently moving orb in front of a curtain at the Cosnette house.

This digital image also taken at the Cosnettes' house, included a slightly illuminated area on the wall.  We've highlighted the area using the paint package.  Dave and Martin have had many encounters with the unknown down the years...is this image somehow representative of a Grey??  That would certainly be in keeping with their long term fascination with UFOs and aliens. 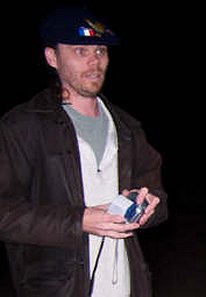 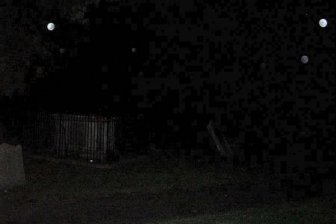 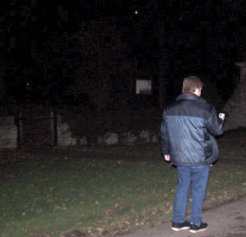 These photos were taken during a further investigation at Birtsmorton in November 2004. There was plenty of wind that night, contributing to a somewhat spooky atmosphere.  Our digital thermometer recorded a drop in temperature of 10 degrees Fahrenheit during our time in the graveyard snapping digital photos. This did not appear to be coincidental with gusts of wind, or any other meteorological phenomena.  Indeed, the area we were investigating is sheltered, and should perhaps have been a little warmer! 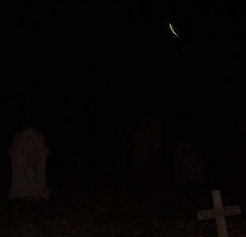 This was the surprise of the night.  It's too cold in November for insects, and this light source is moving at some speed, in a curving trajectory.  Strange to say the least. 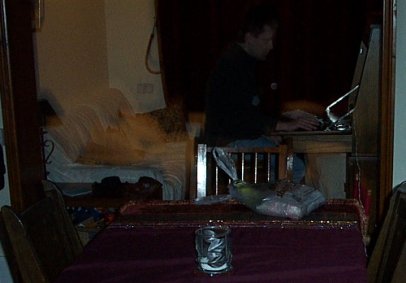 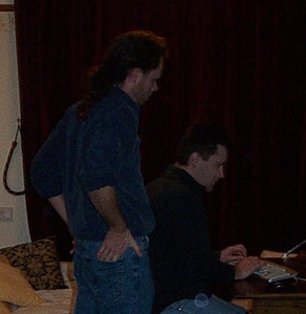 Here are some more pictures from Andy's house showing orbs, this time in the winter.  The first photo also has this rather pronounced out-of-focus effect; the digital camera is focussed upon the candle-holder on the table in the foreground.  Still, it's a little odd for a digital image, and the yellowish lighting adds to the phantasmagorical effect!  Later in the evening Martin saw a large bright blue orb in the vicinity of this sofa in the backroom. Coincidence?

Keen-eyed readers will note three orbs on this photo, close to the ceiling.  The blue one in front of the ceiling light is the most pronounced and seems to be illuminated from below left.  Refraction of light? 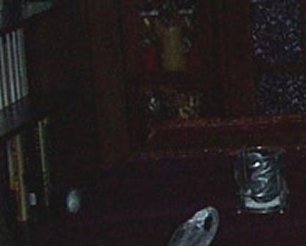 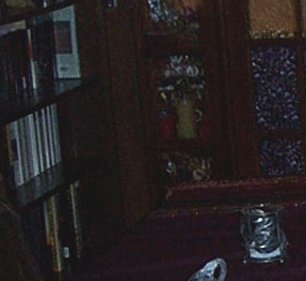 These two images were taken practically simultaneously.  This is a real-life spot-the-difference competition here...The egg-shaped grey 'object' in the right-hand photo is positioned over the table by the look of things.  Presumably this is an orb in motion:  It makes for quite a dramatic anomalous effect.

More weird goings on in the DarkStar household. We had some friends over for a meal and were just sitting down in our dining room amid dim lighting, great conversation and a happy atmosphere.  Suddenly Mrs DarkStar became visibly unsettled and asked us if we could see the bright light on the carpet to her immediate right.  No, we said.  Was she having a migraine?  No, she said.  She kept looking at the same spot peripherally, and then became really agitated.  She fled the room in tears.

Greatly concerned, I followed her out to the hall, wondering if she's spotted something spectral instead (not something we would necessarily share with our visitors that evening, but not entirely unknown to us here!).  Mrs DarkStar had composed herself already, put it down to her migraine headaches from earlier that day and we returned to a pleasant meal, happy that she was now okay.  A glass of wine later and everything was back to normal.

Later I asked her whether she'd seen a ghost/spirit?  Oh yes.  Not only that but she'd felt its presence - a male strange giving off bad vibes.  Fortunately, he hadn't stayed about once she reacted emotionally to his presence, and has, fortunately, not returned since.