As part of our on-going investigations into the paranormal, we at 'Cosmic Conspiracies' have been hanging around several graveyards in Spooky Gloucestershire.  Naturally, or un-naturally, enough, we have been doing this at night-time, and have brought along digital cameras, a digital thermometer, an EMF reader and a night-sight camcorder.  We have also set up some control experiments to ascertain whether we could reproduce the orb phenomenon by other means.

This first set of digital images was taken in Birtsmorten Churchyard, Worcestershire on the night of 6th September 2004.  We took most of the images during and after twilight, and the atmospheric conditions were excellent, being windy, mild and dry. 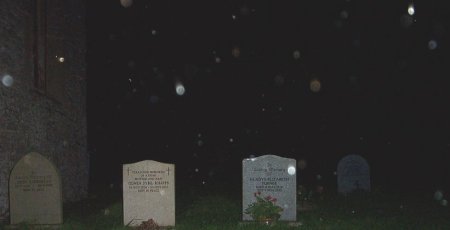 This area of the graveyard was the most productive in terms of the capture of multiple orbs on film.  This image, for instance, shows a variety of colours and luminosities.  Is it a coincidence then that this part of the graveyard has seen the most recent burials?  It certainly contrasts with the other side of the graveyard, where no orbs were picked up at all!

The atmospheric conditions seem to rule out the standard explanations of moisture droplets in the air, or house-dust.  Finally, Martin 'picked up' the name 'Elizabeth' near this area; which turned out to be the middle name of the lady interred here 20 years ago.  On a previous visit he had become short of breath in this area and had had to leave the graveyard.  We are currently researching this lady's cause of death by local enquiries. 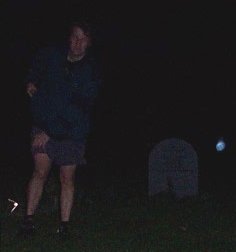 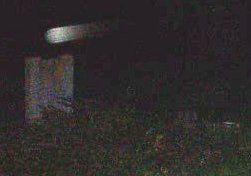 It appears that some of these orbs practically cling to the backs of our intrepid investigators!  Martin, who has a keen interest in Spiritualism, points out that psychic connections from Spirit Guides are invariably felt as a presence behind you.  For instance, a tingling sensation, feeling breath or coldness upon your neck, or being lightly touched.  I am reminded of Don Juan's spiritual thump on the back during the initiations of Carlos Casteneda into the bizarre Spirit Worlds of the Yaqui Indians.

Martin is clearly doing the Can-Can on the middle image above, although he claims to be simply adjusting his EVP recorder.  A likely excuse.  But it just goes to show that orbs don't care much for how the rest of the image will turn out!  Note also, the bright, angular object behind Martin's right leg.  We don't think this is a flower pot, so what is it?  Finally, is there a comet in the graveyard?...or a fast moving orb, or... something.  Here are more: 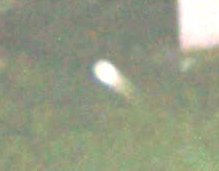 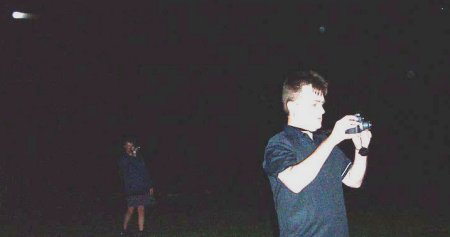 Given that the shutter speed of the digital camera is set for 1/100th second, these orbs are really moving.  It seems unlikely that they are dust swirled around by eddies in the air.  And the fact that fast moving orbs can be captured alongside motionless ones, as in the middle photo above, precludes the action of a strong wind...although it was windy that night.  But we do wonder how many of these orbs might be due to dust close to the flash of the camera, so we decided to do an experiment by shaking a jumper in front of the camera under similar conditions that night.  The following photo is interesting to say the least: 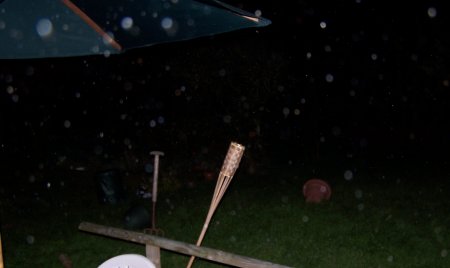 To the most part the 'dust orbs' are milky, and lack luminosity.  There is also a greater speckling apparent than in our churchyard shots.  But there are some really quite good blue orbs among them as well. Are these due to dust, then?  This is where our experiment becomes ambiguous.  Because we may well be attracting orbs anyway, and they may be appearing in conjunction with the dust particle orbs.

In case the gentle reader finds difficulty with this possibility, we would like to add the following.  On Sunday night before this visit to Birtsmorten, Andy witnessed a bright blue orb in his lounge for a split second.  Also, during the evening of Monday 6th Sept, at the house where the above experiment was carried out, Martin actually witnessed an orb and took this remarkable digital photo from a pitch-black room: 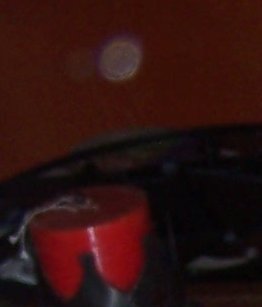 This orb seems to be lighting up the wall behind it, and is certainly multi-faceted, in sharp contrast to those milky, dull dust particle 'orbs'.  We have experienced paranormal phenomenon in this house before, and ghosts have been seen in it and outside it by several family members, and investigators.  So it is fair to say that this leaves the nature of those blue orbs in the dust experiment image very much in question; they don't really appear to look like the other dust particles in the flash light, after all.  More research is needed, but, as in quantum physics, the presence of the experimenters may well affect the outcome of the experiment! 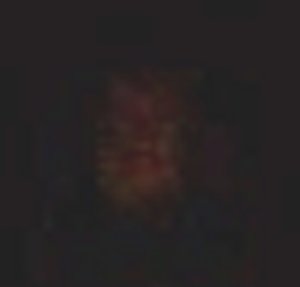 Martin captured this incredible image of a faint light source over a field near his house.  Blown up a little, there is clearly a face, making this some kind of self-luminous apparition picked up by Martin's digital camera.  He thinks it is of a woman, but to me it looks more like a bearded baby!!!  The Ghostly Gnome of Gloucester?

We've received a helpful set of e-mails from someone who has previously investigated the digital image 'orb' phenomenon, who considers it likely to be down to the way digital cameras work.  He also sent us a link to a page from Fuji, some of which is reproduced here for general background information.  The 'Gloster Ghosts' team think there is more to this phenomenon than just dust and artifacts of the cameras themselves, but these considerations are useful to bear in mind as they probably account for a lot of the anomalies:

"When you use the flash, the light from the flash reflects off the dust particles and is sometimes captured in your shot.

"Of course, dust particles very close to the camera are blurred since they are not in focus, but because they reflect the light more strongly than the more distant main subject of the shot, that reflected light can sometimes be captured by the camera and recorded on the resulting image as round white spots. So these dots are the blurred images of dust particles.

"You can reproduce this problem relatively easily by taking a picture right after you put away goods that create a lot of dust, such as feather bedding. In actual photography, this problem frequently arises in shots taken at construction sites, etc. It may also occur when it is raining or snowing. Compact cameras in which the flash and the lens are close together are particularly susceptible to this problem."   (Ref: Fuji Film - webpage no longer available)

The explanation provided above goes a long way towards explaining many of the orbs captured on digital films when flashes are used (although it's not clear why this same explanation cannot also be applied to conventional photographs: pictures of orbs on 35mm film seem much rarer, yet surely the same phenomenon should occur here as well?).  The 'Gloster Ghosts' team were recently contacted by Radio Gloucestershire  for our opinion about a daylight photo of a large bright orb captured on a digital photograph above a recent grave covered in flowers.

We have not been able to authenticate the photo, nor are we able to publish it at this time, but it is a clear piece of evidence that orbs need not necessarily be the result of dust or water particles highlighted by the camera flash.