We kicked off this season’s series of ghost hunts with a tour of one of the most haunted villages in England: Prestbury.  We have been researching local ghost stories in the county and thought that it would be a good idea to take a group of fellow ghost enthusiasts with us around this picturesque, but spooky, village.  This particular group were from the Spiritualist Church, which Martin attends, and we hoped that having some additional psychic involvement along with us might bring forth some paranormal phenomena.  We were not to be disappointed! 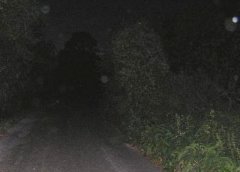 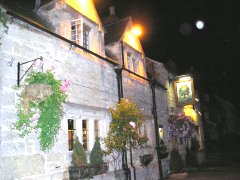 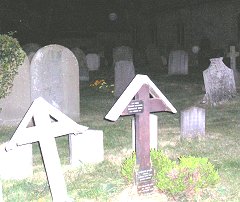 A week before taking this group on the tour, Martin and Dave Cosnette and I scouted around the village with our various sets of ghost accounts, and located the two dozen or so places which boast a ghost.  At the church graveyard, Martin encountered a dark shadow fleetingly.  Was it the Black Abbot, appearing in broad daylight? 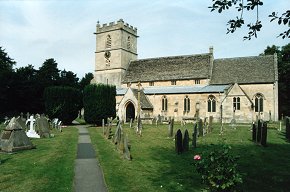 The sighting was too brief to be sure, but it seemed to provide an omen for the actual tour. We then carefully planned a route around the village to take in the various locales (which would also culminate in the arrival at a Public House, as well, of course!  If we encountered no disembodied spirits en route, we should find ample supplies at the pub…).

Finally, Martin and Dave wrote out an excellent guide to the ghosts of Prestbury, which I then used to host the actual tour.  We also visited the local library, and obtained more relevant books and ghost tales from the area, as well as some quite old maps, which proved useful.  Our meticulous planning paid off, allowing us to provide our guests with an evening full of ghost stories and local folklore. 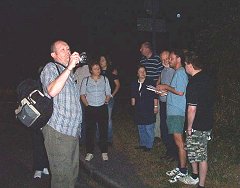 The actual group also provided us with some helpful information as we went along, including the location of a couple of cottages and old shops which had eluded our researches.  Several theories about the nature of various types of ghost were debated in lively discussions. A couple of the group actually lived in the village, which also helped.

One story from the area has it that a teacher, driving towards the village from Cleeve Hill, witnessed a funeral cortege in a field adjoining the road.  She saw a hearse pulled by plumed black horses, and mourners dressed in Victorian clothes.  Finding this to be a rather odd gathering in a farmer’s field, she turned around in the village and retraced her route along the Southam Road, only to find the funeral cortege had entirely disappeared.  The teacher had been left puzzled, and spooked by the encounter. 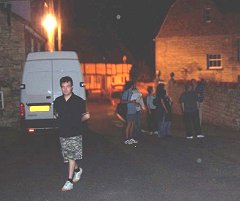 One of the group, Richard, pointed out that in times gone by funeral routes to a church would indeed follow a different path to the main road.  This kept the paths of the dead distinct from the paths of the living.  So this account of a ghostly funeral party was not entirely out of place in a field!  We will look into the possibility that such a route during Victorian times did indeed coincide with the teacher’s spooky sighting as our researches of the area continue. 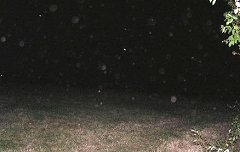 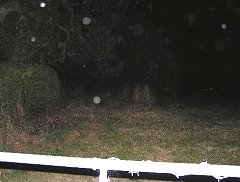 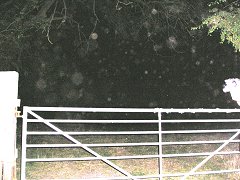 We also visited the site of the old Bishop’s Palace, which now only consists of a moated area close to a public footpath.  Several stories in the area describe ghosts near here, including the Black Abbot.  Digital photos taken by members of the group in the vicinity picked up a wide range of orbs (above).  It was a perfect late summer’s evening, with no moisture to speak of in the air.  The fields in the immediate area were laid to grass, and no crops had been recently harvested, as far as we could see (this would have created dust in the air, which may be a cause of some autumnal orbs.)  We joked that we should have hired a horse rider, covered in phosphorescent paint, to ride like a ghostly apparition across the adjacent Cheltenham Racecourse. As it turned out, we didn’t need to provide any entertainment of the sort! 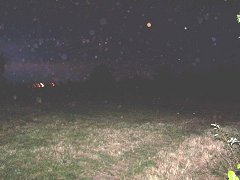 It was at the end of the tour, as we traced the path taken by the Black Abbot from Reform Cottage to the Priory graveyard, when things started to happen.

Several of the group are sensitive, in the mediumistic sense, and almost as one voiced their concerns about temperature drops.  Some seemed to feel the presence of an unexplained energy in the graveyard.  Something seemed to be brewing up, perhaps as a result of the presence of so many sensitive individuals. The group fragmented as individuals and smaller groups began to follow their instincts, as they explored the area. 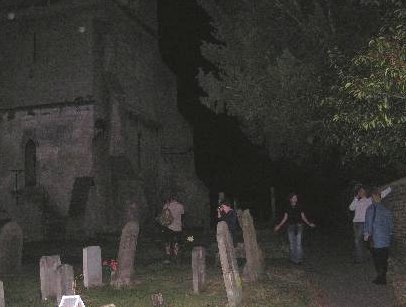 Martin Cosnette has seen many, many ghosts in the last few years, and is rarely shocked by any of them.  But the sudden vision of a white lady, dressed in Victorian costume, standing behind Marilyn, one of our group, was too much even for him.  There must have been something sinister about this ghost to provoke Martin into letting go a series of wild curses, in fright.  What happened next seemed to confirm this feeling. Because Martin saw the ghost push at Marilyn’s back.  And, incredibly, Marilyn fell forwards involuntarily. Martin’s apparition then disappeared, leaving both of them momentarily stunned.  From Martin’s viewpoint, the encounter looked something like this: 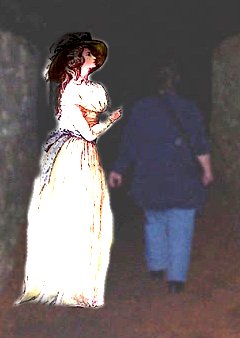 In an excited state, Marilyn and Martin shared their experiences with each other, and Marilyn pointed her camera in the direction which the ghost had stood, and took a photo.  And this is what came out: 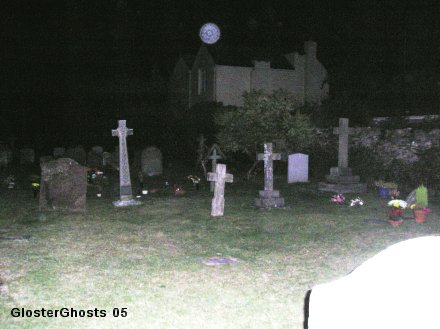 It's an absolutely stunning orb.  News of the ghostly encounter soon reached the rest of the group, many of whom had sensed energies within this notoriously spooky graveyard.  It seemed to crown an excellent evening, creating a buzz of chatter which was soon aided and abetted by a round of drinks at a pub in the village.  We had already started to plan the next ghost hunt…

Written by Andy Lloyd, 14th September 2005, with thanks to Martin and Dave Cosnette, Richard and Marilyn.

Friends of ours from the US and East Anglia visited Gloucestershire and came with us on a ghost-hunt to Prestbury.  To spice things up a bit, Martin invited along some psychics and mediums of his acquaintance. 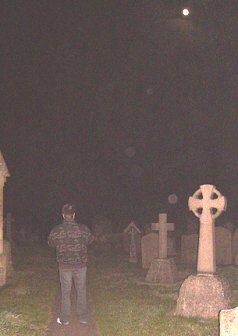 One of them hadn't arrived at the agreed meeting spot as planned, but for some reason Martin had a strong feeling that she was standing outside the village's other pub, on the other side of the graveyard (there is a public pathway through the Prestbury Church graveyard).  So Martin and Dave trekked through the church's grounds, whereupon  Dave saw a moving shadow.  Sure enough, our missing friend was there sitting in the car outside the other pub. Martin's intuition had already kicked in!

We initially thought that we would take the entire group on a tour of Prestbury, as before (see above).  However, the evening itself had other ideas, and before we had even started up the main street one of the mediums was picking up a message from the other side:  'Go to the Churchyard'.  Well, who were we to disagree?  So we backtracked up the dark pathway into the Churchyard.  What was immediately apparent was the sudden dip in temperature. The main medium in the group also spotted a shadow figure as soon as she entered the graveyard.  As we have described above, the graveyard is inhabited by a number of spirits, including the ghost of the Black Abbot.  As I found out after a short while; I received 2 sharp pokes to the ribs.  When I looked round; surprise, surprise, there was nobody there!  Similarly,  Mindy, who was visiting from California, felt her arm being grabbed by an unseen spectral hand.  Plenty of physical contact going on.

Before long, some mist rolled in and we were enveloped in fog. This gave us a terrific opportunity to photograph fog to compare with some of our classic orb photos.  Here is one of those fog shots: 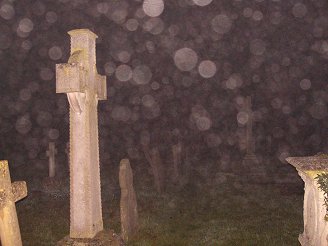 Clearly, these milky white orbs are water droplets from the fog.  But...just before you conclude that all orbs must be water droplets, consider this next photo, which was taken in the same sequence.  This, we think you'll agree, is a completely different type of phenomenon, full of very interesting effects indeed.  We've done a bit of an Etch-a-sketch recreation of what we can see in the way of ghostly faces in the mist: 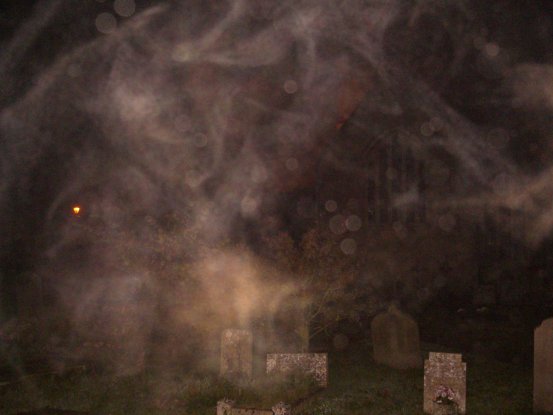 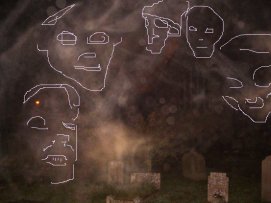 The very bright area centre left at the bottom is quite difficult to explain. Is this the centre of the vortex from where these apparitions are derived?  It's almost like we were suddenly surrounded by these spectres, looking down on us with smiling faces.  The woman on the right is particularly clear, perhaps even recognisable.  This is a remarkable photograph.  the more you look at it, the more you can see.  It's certainly very different from the straightforward fog picture above it.

We picked up some other orbs, colourful and dramatic in character: 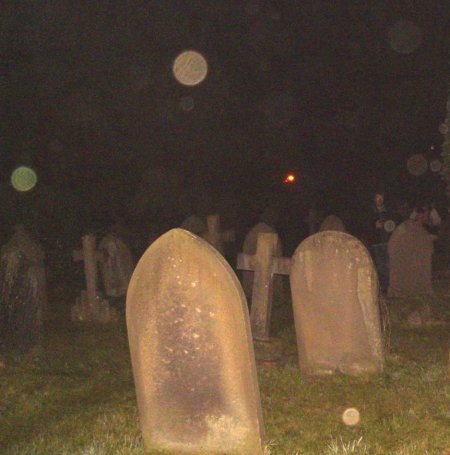 Here's an orb which is also quite difficult to dismiss.  The picture is a detail of a larger photo, and shows a portion of a tree in the background, which was about 15 feet away.  The reddish orb appears to be embedded within the branches of the tree.  In fact, the twig in the front is clearly in front of the orb.  Now, if the orb was a dust particle or water droplet in front of the camera lens, then how on Earth could it be seen to be behind this background object? 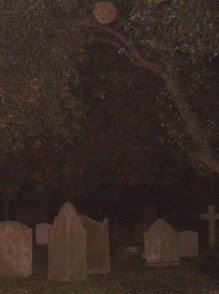 At this stage we broke off from the Churchyard and continued through the village.  We decided to keep the ghost stories quiet, and to ask our invited spiritualists and psychics to see if they could pick up the residual energy.  It didn't take long before they were tuning in to the spirit world at several locations where ghosts have been documented.  To our delight, visions of ghosts were picked up, and described, that correlated very well with the prevalent ghost stories in the area.  So, our medium told us about the violent death of a cavalier at the hands of his enemies, and described his period dress from the English Civil War.  We were already aware that this medium is not savvy about the ghost stories in this part of the world, and has no access to the Internet to have read our previous reports.  Indeed, she was delighted to have many of the stories read back to her from our notes, confirming her own intuitive insights and messages from beyond.  She was amazingly accurate, and the whole group was astounded.

We adjourned to the pub and shared many a ghost story over a couple of pints.  Which is how it should be!  Our American friends recounted their tales of paranormal phenomena, which were very varied and extensive.  No wonder the whole group was tuning into this environment so easily.  Prestbury is evidently a remarkable destination for any ghost-hunter.

Written by Andy, Dave and Martin 20th November 2006, with thanks to Cindy, Steve, Mindy and our psychic friends