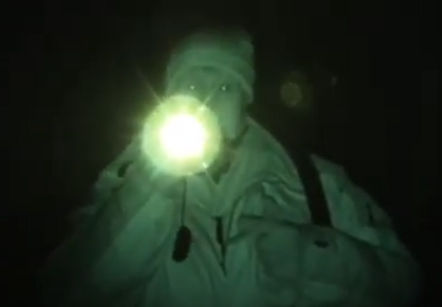 In late 2010, when the 'Gloster Ghosts' team were receiving world-wide interest in our ghost-hunt reports, we were asked if a film crew could document what we were experiencing.  There was an opportunity to make a new TV series about ghost-hunters and the director was making pilot shows with a few select groups located in different regions of the UK.  We agreed to take part in two days of filming and interviews.  This would include two separate ghost-hunts in Cheltenham on consecutive days.  The first would be at Prestbury Church, which we had investigated a couple times of time with great success, and then an allegedly haunted pub in the town.

The ghost-hunts were both amazing!

The ghost-hunt in the graveyard at Prestbury Church on an absolutely freezing cold night provided some remarkable evidence.  The professional film crew's equipment wiring became mysteriously entangled; multiple times.  There was equipment malfunction and interference, psychic events, EVP 'voices', camcorder orbs and footage of a ghostly apparition caught on film.  The quality of our ghost-hunt was enhanced significantly by having TV cameras on hand, not to mention the excellent editing and narration provided by film-maker Lizzie Toms. 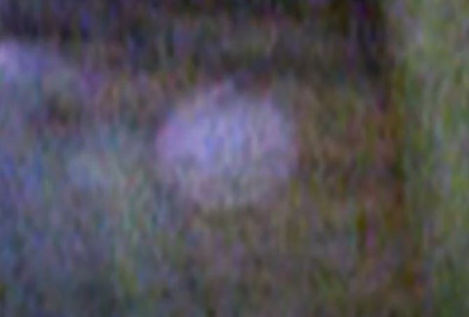 Still of the orb picked up on Dave's camcorder

Because Lizzie was negotiating with production companies to make a new series, we were not at liberty to publish anything about these ghost-hunts at the time.  This went on for some time - in fact, it was several years before we gained access to the pilot shows she had made.  This is entirely normal in such circumstance, of course, and I think it reflected the strength of the material in the films that Lizzie kept at it for so long - and that included Martin Cosnette emigrating to the US.  The downside of this wait was that we didn't get a chance to share our footage or story on the Gloster Ghosts website.  Now, more than a decade on, it really is time we made this evidence available.

We have two sample segments of the films to view on YouTube (links below).  I've included here some screen-shots to give you an idea of what happened on those two evenings.  Martin has always been a sensitive physical medium and he had been developing control of his abilities through proactive involvement with a local spiritualist church.  He was at the point where he was allowing spirits in, knowing the risks but also maintaining enough control to be safe.  These ghost-hunts witnessed the realisation of these psychic skills.

They also demonstrated the strain he experienced physically when he allowed himself to become possessed.  Dave and I, as well as the film director, became quite concerned about Martin's wellbeing at several points during the filming.  It was quite edgy stuff.  We had to balance our natural desire to see where this would lead against our growing concern that Martin might be about to suffer some kind of medical emergency.  Fortunately, he maintained enough control to recover completely after each episode, despite appearing physically and emotionally drained.  (Note to self - next ghost-hunt with Martin, take a battery-powered blood pressure monitor!)

"The night... at Prestbury Church had some good encounters... I remember it being -10C and absolutely freezing. Lots of stuff happening, like the knots appearing in the headphones cord and how the cable from the video camera had somehow looped through the handle on Lizzie Toms bag?

"Both me and the camera man independently saw a shadow person in the same exact spot, outside the pub and Mart being really emotional at the spot by the gate to Prestbury Church, where he was experiencing the conditions of somebody being hung by the tree. It was the exact spot where I had seen a shadow person dart behind the tree, earlier in the evening."

What was particularly interesting for me was how the psychic events experienced by Martin, and to a lesser degree by Dave and Lizzie as well, coincided with an up-tick in phenomena captured on camera, audio tape and film.  This culminated in the emergence of an apparition which may or may not have been the ailing ghost who had engulfed Martin's psychic being. 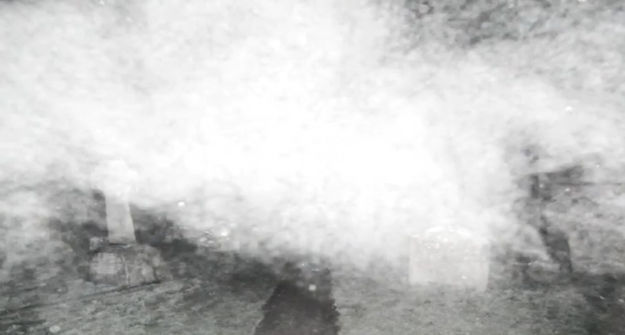 'Ectoplasm' in Prestbury Graveyard - on a clear, frosty night in December

As per the other events, Lizzie takes up the story in her narration:

"What happened next frightened everyone. Martin's photographs show a cluster of orbs the only female member of the crew. Such strong, clear orb activity has never been seen before by the investigators and could explain the interference of voices the cameras were picking up. 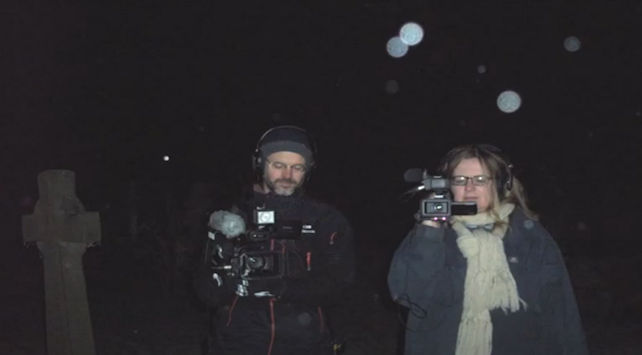 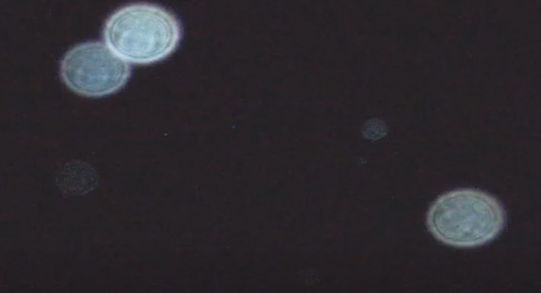 "However, on scanning the footage from the motion sensor cameras it is evident that more than just orbs showed themselves. 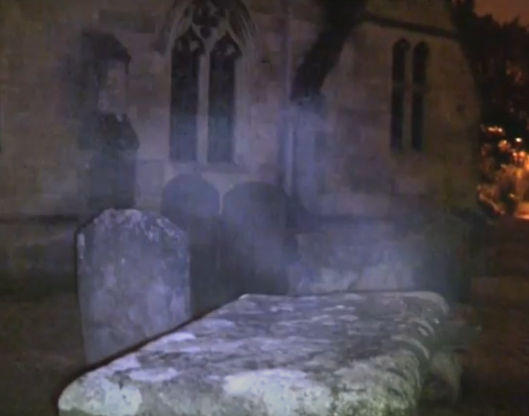 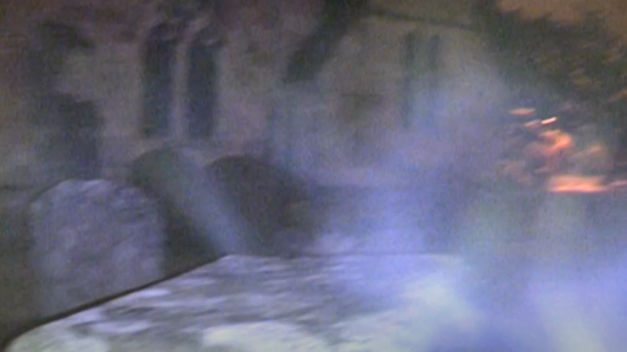 "A white apparition is seen manifesting itself. Slowed down it is clear to see. There is a distinct shape. Could this be the male figure within the ectoplasm or, more importantly, the notorious black abbot trying to reach Martin?"

Here's the footage of the events of that evening:

By the following evening, I for one was starting to feel quite spooked out.  I was witnessing my friend Martin taking more personal risks during his encounters with the supernatural.  This time, he was seeking out a ghost who had been known to haunt the Suffolk Arms pub in Cheltenham:  Specifically, in a now disused skittle alley.  It was full of junk, really - not perhaps the ideal place for us to roam around to carry out our normal investigative work.  But the evening quickly centred entirely upon Martin's more subjective experiences.  At times they became almost over-powering, causing us all a degree of genuine concern for his welfare.  But, mixed with that, was a quite remarkable recollection of the possession, as well as the characterisation of the spirit: A short bloke who frequented the Suffolk Arms in the 1950s and who would 'get stuck in' if there was ever trouble. Martin explained that the spirit had felt confused by our presence and had been weighing us up - deciding whether he could take us down or not! 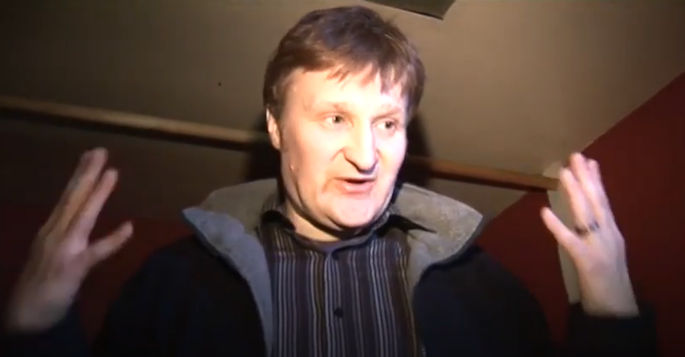 Martin Cosnette in the Suffolk Arms

I remember speaking to someone in the pub who identified the character Martin had been possessed by.  Dave also recalls our conversation with the then Irish landlady who confirmed the identity about the man who had possessed Martin - a regular punter who had long since passed.  Remarkable.

Here's the footage of Martin's psychic ordeal at the hands of this belligerent ghost: