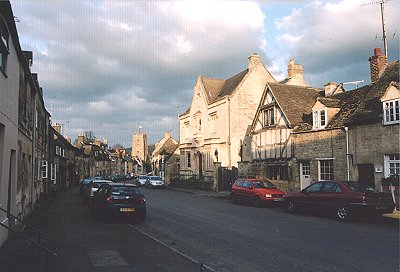 “Old Nick went out upon a prowl,

But A got stuck fast in Sudelely lane,

We began our sojourn about the town with a wander around the graveyard of St Peter’s Church, snapping digital photos.  Martin was hearing male voices at the time, and wondered whether they came from inside the church itself. True, it had lights on inside, and was doubtlessly inhabited, but I could hear nothing at all. 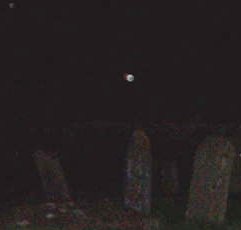 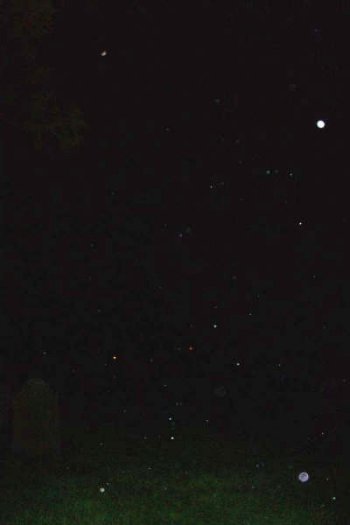 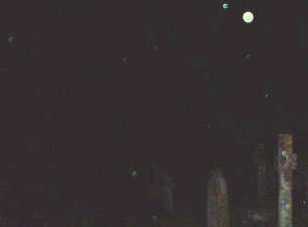 In fact, the town seemed pretty quiet bar the engine sounds of the odd motor vehicle passing along the main street.

We decided to wander the town a bit, and meandered along some deserted alleyways leading down the hill.  The image below might show a red figure up the alley, but it might also be a lighting effect from a street-light.  The next image shows a really good orb, seemingly in my line of vision. 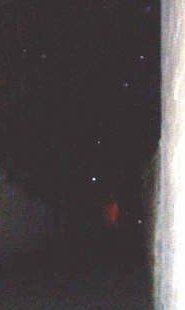 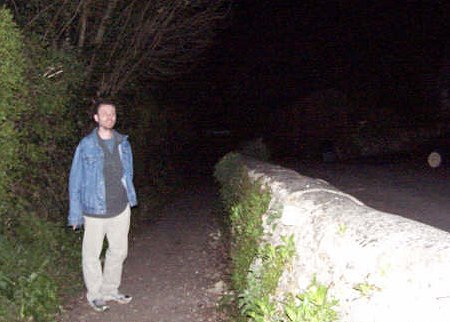 We were of the mind to ‘let the spirits guide us’, and we alighted upon a path that edged towards the River Isbourne, a small but fast-flowing water course.  A small bridge led us to a recreational ground which was distinctly chilly. 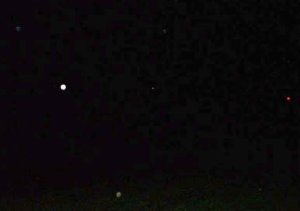 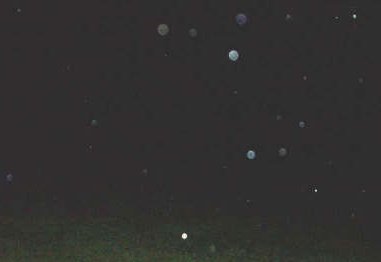 I started taking temperature readings and discovered, to my shock, that the temperature was plummeting.  That usually could only mean one thing. The lowest point was a freezing-cold minus 7 Celsius, enough to create a sharp ground frost.  Yet, there was no frost at all. In fact, it was a frost-free night generally. Up in the town, I had been recording temperatures of 8 Celsius on the pavements, and 4 Celsius on the grass.  So that was a drop of at least 11 degrees Celsius from the grass areas in the town and the grass on the recreation ground.  That’s odd, don’t you think? 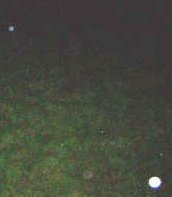 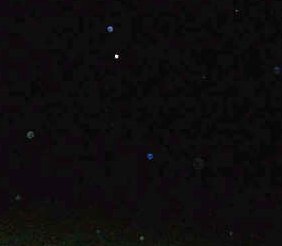 It got weirder.  Martin said that he had heard the sound of splashing in the river, and then the voice of a young girl.  Of course, there was no one there at all.  So we took photos randomly. After one of these photos my camera went completely dead.  Yet the battery had been at least half-charge.  Martin took a photo of me as I stood there with my drained camera. He gave a whoop of surprise: the image showed a bright orb right above my camera. 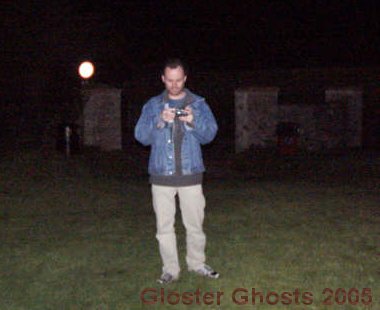 I turned my camera off, then on again, and it charged up.  So it wasn’t the battery… I took another photo and the same thing happened again; the camera went dead on me. Several times we repeated this course of events, with Martin taking photos of me each time my camera died. Each time, the orb was clearly imaged.  The phenomenon was repeating itself in a predictable way.  The orb in question has a reddish edging. We checked to make sure there were no light-sources causing this effect, but there was none. However, on closer inspection it is clear that the 'orb' is located just above the corner of a wall. It seems likely that it is the reflection of the flash on a sign located above that wall!  We shall heave to return to the same place at a later date to be quite sure, though. 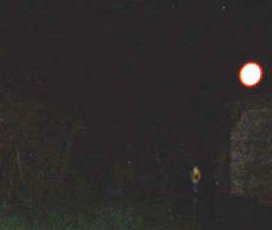 Nevertheless, I was certain we were in the presence of something ghostly.  We had been getting multiple photos of orbs all night, and the camera was now acting strangely, too.  It was quite exhilarating: at last, our recordings of orb images were being registered alongside actual paranormal activity; severe temperature changes, disembodied voices and camera malfunctions.

We stood on the bridge for a while, and Martin photographed the river.  I was stood behind him and, when he turned, he jumped.  “But you were stood right next to me, weren’t you?” He exclaimed.  "Er, no, Mart, t’was not I".  More strangeness...One of the photos of the river showed this bizarre little 'creature' in it:

It seemed as though the tip to visit haunted Winchcombe had been a good one.  We continued up into the town, via ancient Mill Street, to take a further series of photos, including down the famous Cowl Lane.  Some of these show more orbs: 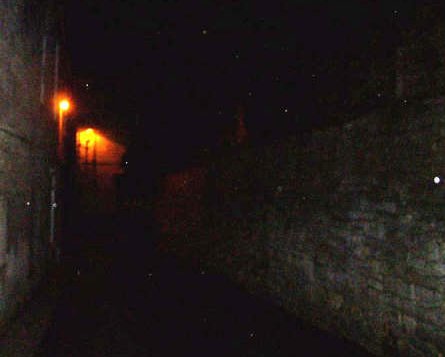 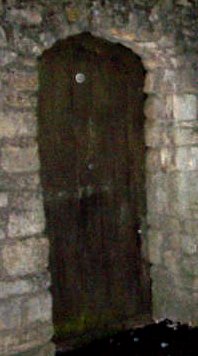 The elderly residents of the town were spilling out of the town hall, and gave us some disconcerted looks as we acted like tourists in the darkness of the late evening.  We had no desire to scare the locals, so we decided to wrap things up and head back to Gloucester, our mission to investigate Winchcombe’s ghostly reputation having been a remarkable success.

The Folklore of Gloucestershire

Ghosts and Witches of the Cotswolds

Folklore, Myths and Legends of Britain

The Standing Stones of Europe