A Haunting in Westgate Street:

It's been a while since the Gloster Ghosts team did a ghost-hunt.  No particular reason, to be honest.  But being asked to investigate a haunted shop in the Westgate quarter of Gloucester was just the invitation we needed to get right back into it.

The building that contains 'Spencer's Deli' is hundreds of years old, and stands in an area whose historical pedigree is matched only by its tales of ghosts and spooks.  Monks connected with the cathedral, and the abbey long before it, walked these streets and the floorboards of these close-set old houses.

The activity that was reported to us was poltergeist in nature.  A tap mysteriously turns itself on, causing a flood in one instance.  Goods in the deli fell off shelves, or off hooks.  Footsteps have been heard in the rooms above the shop.  And this is where things get really interesting, because the two storey flat above the shop has been empty for over 50 years.  Moreover, there are no longer any stairs into the rooms above the old butcher's shop. Instead, access is through a loft opening, accessible only using a long ladder.

Naturally, we were keen to investigate... 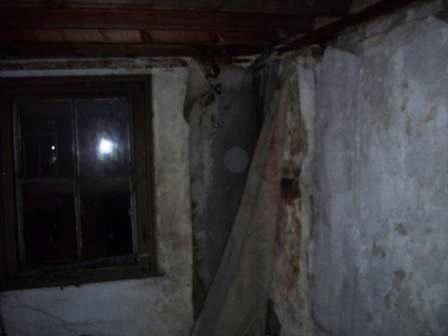 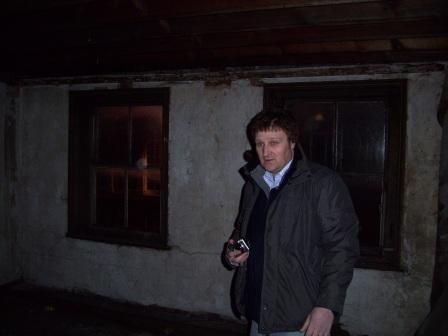 Martin, and a psychic friend of his called Pam, had both seen a little girl in spirit walking through the shop, before we headed up the ladder.  Such activity is not unusual for those who have this awareness, and Martin regularly sees 'ghosts' in his everyday life, so such an apparition need not indicate a haunting as such.  But it was a good start. 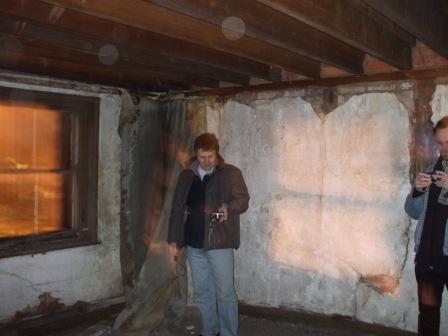 The empty rooms above the shop look onto Westgate Street.  It seems strange that such good living quarters have not been lived in for over five decades.  The decor was, well, shabby, as one might expect, with bakelite fixtures and peeling wallpaper.  It was not long before we were getting temperature drops, and plenty of orb photos. 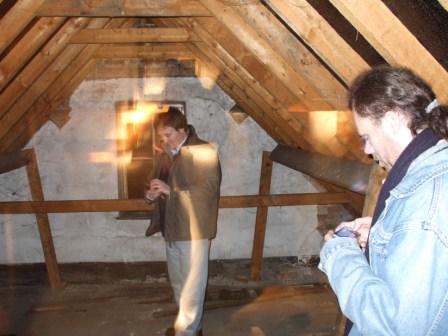 The light coming through the grubby windows, from the streetlights of Gloucester, created odd effects on Dave's camera.  There are many blurred double-exposure type effects, with light streaks.  The photos above show Martin wrapped in light, which is fascinating in itself, given his psychic abilities.  Dave wondered whether some kind of portal or dimensional effect was going on around us.  Mrs DarkStar can see a face in the first image, surrounding Martin.  The second photo is simply wild!  A phantasmagoria of super-imposed light.

Before long, Martin saw a figure in black walk through the room.  Perhaps he was a monk, or an ancient denizen of these old rooms.  But Mart got a really good look at the old spook.  Dave started to use his camcorder, only to find that it wouldn't work- something to do with the head needing cleaning, which was most unusual. 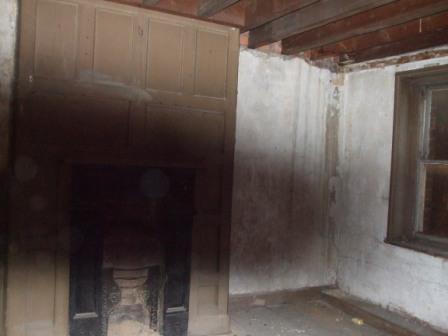 Shortly afterwards, Martin captured this dark shadow on a photograph.  It contains a myriad of orbs, and makes little sense in terms of shadowing from light sources within, or without, the room.   Compare the anomalous image (above), with the shadow, with a 'normal' photo  of the fireplace in question, taken just seconds later (below): 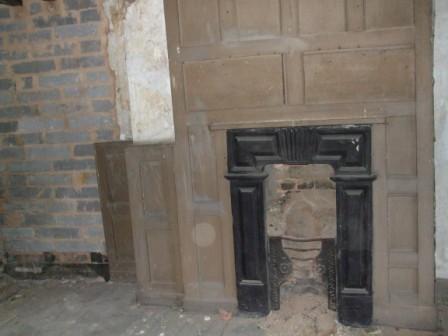 Is this a photo of a shadowman, or similar entity?  Perhaps this was a manifestation of the ghost Martin had just seen.  Alternatively, this might be a shadow created by a finger in front of the camera flash. 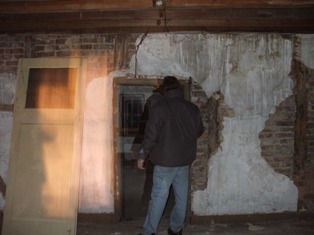 More shadow play:  Martin is seen standing in a doorway which leads into the next room.  The shadow appears to be stood right in front of him, even though the room extends outwards from his position.  He wonders:

"This pic is bugging me. How can a shadow be in a door way? A shadow can only form on a solid object like a wall or floor, etc.  Also, it's facing me.  You can tell this by the shoes. You can see laces on them, and then the shadow is starting to super impose onto me showing itself on my trousers. The shadow is also slightly taller than me. What is also interesting is if this is a shadow it had a slight pink tinge to the hands. All together strange. I think its a shadow-person for two reasons: my shadow should be either on the back wall, or on the floor. Also, the shadow is really black compared to other pictures in the series."

Well, I think you'll agree - this is a really puzzling photo!  Here's a better view: 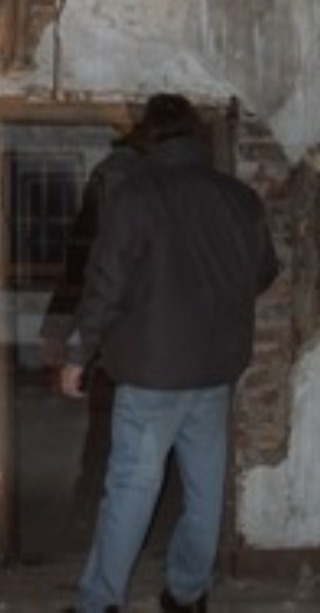 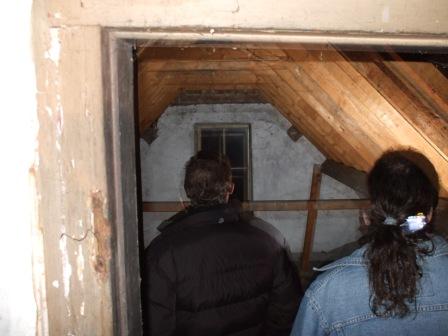 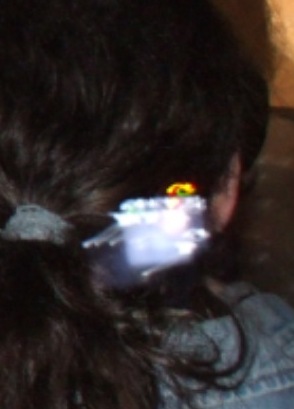 On this photo, a flash of light light appears near my right ear.  Again, there is no easy explanation for this. Was this an insect caught in the flashlight?  We certainly detected no insects in these rooms, and it's February during a cold snap.  So this seems unlikely.  Again, perhaps more spooky goings-on. 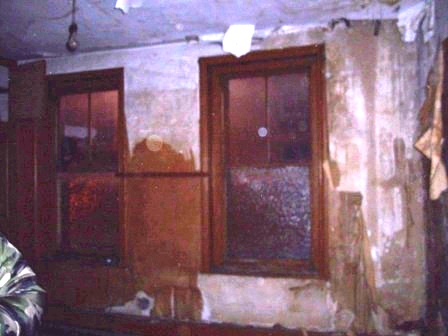 These orbs were a consistent feature of photos taken in the upper, abandoned rooms.  We found no orbs in our photos of other parts of the property, including the shop itself, outside, the cellar or the buildings to the rear.  It's possible that these areas were less dusty, or possibly just less active.  When I was taking flash photos here and there, I could see dust appearing in the flashlight, but the photos taken were clear of orbs.  Only in the derelict rooms did these orbs appear. 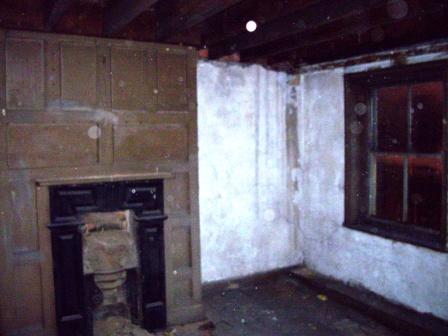 We wondered whether these rooms had been left empty for a reason.  Was the paranormal activity recently experienced something that had occurred before?...an event that might have compelled the previous owner to abandon living in the upper stories of the shop, and even remove the staircase leading to them?

We investigated this possibility by tracking down a member of the community who we knew had worked in the very same shop some years ago. He was generally open to the idea of ghosts and the paranormal, but was able to confirm to the Gloster Ghosts team that he had never experienced anything out of the ordinary during the 15 or so years he had worked there. He speculated that recent changes at the shop might have triggered off the supernatural events that have been reported to us.

We saw no evidence of recent structural changes to the shop, although there has been some major structural work carried out at 'Blushes', the hairdressers next door, both upstairs and downstairs.  Perhaps this building work at 'Blushes' had been a catalyst for the paranormal activity.  Our next line of enquiry was to discover whether any paranormal activity has been taking place in that shop too.  Our subtle enquiries paid dividends as we discovered from a member of staff that spooky goings-on, particularly at night, had been reported by staff there too.

Whatever the reason for the reported activity, none of us picked up any sense of evil, or such like, at the time.  The mood of the investigating party was good throughout, and one can only assume that any spirit haunting the property is not a threatening, or malign presence.  However, in a rather worrying development since, one of the people working at the shop has reported being bitten by some unseen entity.  Mart and Pam are considering a further visit to see if they can move the offending spirit along.

In early March the owner of the shop, Lee Spencer, approached the local newspaper in Gloucester, The Citizen', which then ran an article about the haunting at Spencer's Deli,  This brought the location itself to public attention.  We were happy to help with the newspaper with the data we had obtained.  The origin of the on-going paranormal activity at Spencer's Deli remains a mystery.

Reference: "Spooky shop's past returns to haunt it" The Citizen, 6th March 2009