A Ghosthunt in 'The Ruffet' 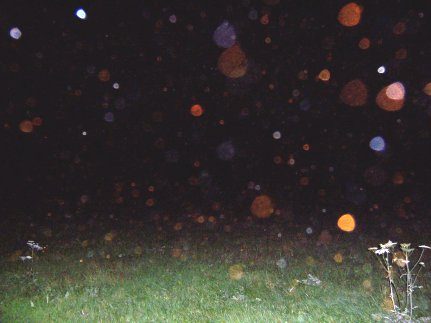 The Gloster Ghost investigative team were joined by two of our very good friends. Pete and Ginny, to check out an allegedly haunted area on Ginny's father's land.  He lives in West Gloucestershire, near to the M50 motorway.  His land is part of an extensive Civil War battlefield. 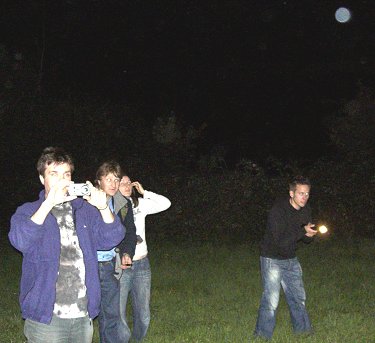 Our ghost-hunt took place on a warm and moonless September night.  The wind was intense at times, and there was extensive cloud cover.  Temperatures were steady at about 17-19 degrees Celsius.  Right from the start it was clear we were in for an orb extravaganza. 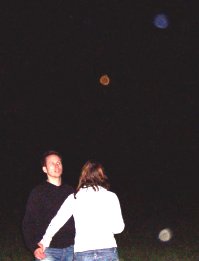 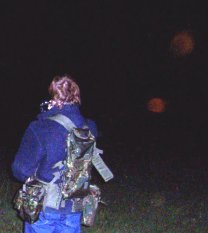 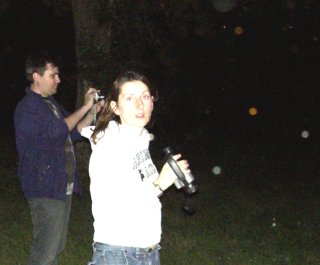 We used three different digital cameras.  What was quite exceptional about the crop of orb photos we obtained was the variety and strength of the orb colours.  Usually the orbs are bluish, or simply grey.  But during this particular ghost-hunt all three cameras captured images of quite intensively coloured orbs.  The colours varied significantly, with reds, oranges, yellows and blues predominant.  It's important to note that we wee in the countryside, out in unlit fields.  There were no external lights creating lens flares or such like.  The harvests had been finished weeks before, so the dusts associated with the harvests were long since gone.  And there was no humidity to speak of; the winds were dry and warm. 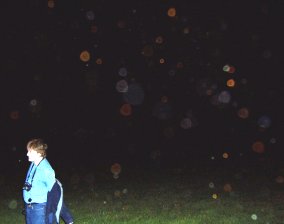 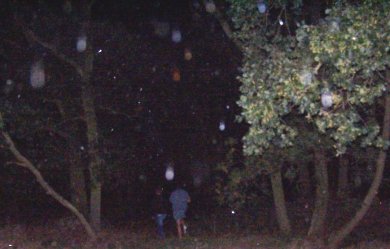 There were insects about, of course, and we could clearly see the bright white, irregular shapes associated with moths, crane flies and midges caught on camera.  These orbs were completely different.  Either they were dust particles captured in the camera flashes, or some kind of other phenomenon.  As far as dust goes, and we discuss this possibility a lot, it should be noted that most of the pictures we took that evening had no orbs at all, or very faint, indistinct greyish smudges.  These we recognise as dust.  They are quite different to these multi-coloured and highly distinct orbs shown in the above photos. 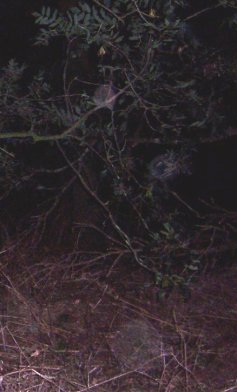 We trekked across the fields towards a place named 'the Ruffet'.  This is an earthwork mound in a large copse of trees between two large fields.  The Ruffet is circumscribed by a small moat.  It is thought that the mound, which is about 8-10 feet high, is a burial mound containing the remains of soldiers buried after the English Civil War battle that took place here in the 17th Century. 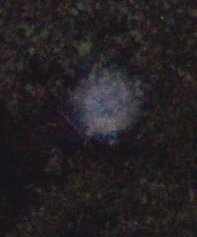 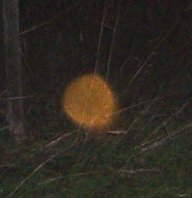 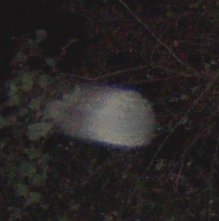 One of the things that was notable was that the pictures of the multiple orbs dried up when we were standing on the Ruffet itself.  I wonder whether we were being accompanied by a ghost initially, who, for whatever reason, would not go near this burial mound.  It turns out that burrows never seem to be dug into the Ruffet.  the local wildlife seem to avoid it.  Ginny's father later related a tale about a visit to the Ruffet undertaken by himself and a group of friends.  Whilst sitting in the adjacent field a mist arose in the area and then moved up the hill to surround them.  This was very spooky at the time, not least because mists are not known to rise up the fields, but generally roll down them. 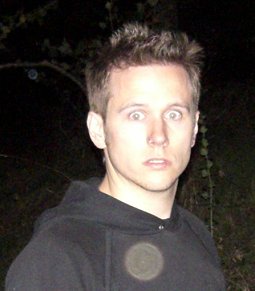 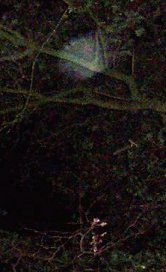 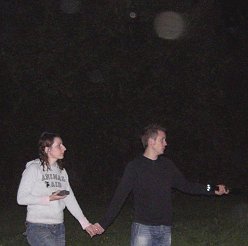 Another thing that was quite noticeable was that large, bright orbs were often captured next to Pete.  Was this a clue as to the identity of the manifestation.  There is good reason for believing so.  The following is a detail from a photo taken on one of the nearby roads.  Ginny thinks she can make out the figure of a woman.  Judge for yourself: 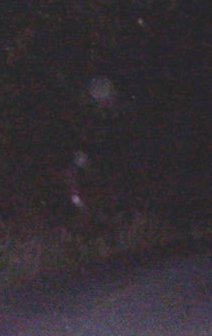 Marti, our resident psychic, saw a number of figures during our sojourn into the fields around the Ruffet.  He seemed to get plagued by one particularly massive orb as well.  these two pictures were taken very close together, so much so that you can see the movement of the two predominant orbs featured.  Not only that, but Martin's attention seems to move along with them.  Was he seeing something supernatural at that particular moment?  Again, judge for yourself: 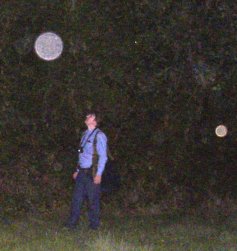 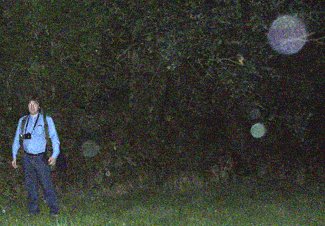 Dark figures were seen around the Ruffet by Pete, Dave and Martin.  Not to be outdone, Ginny and I saw a UFO shortly after walking away from the copse of trees. A bright yellow light appeared in the clouds, quite stationary.  It glowed for a short while, then disappeared completely.  There was no sound at all.  A short while later a bright white light appeared in the sky behind the trees, moving slowly towards us.  Already freaked out by the yellow glowing light, we were initially quite unsettled by this second light...but it turned out to be a helicopter!  However, its colour and intensity were quite different from the yellow light, which was brighter than Venus, and distinctly yellow.  A yellow UFO has been a regular visitor to Cardiff recently, we have heard, particularly in the early hours of the morning.  Did Ginny and I catch a quick glimpse of it? 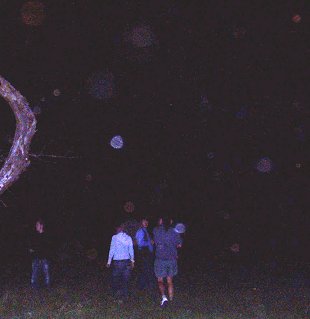 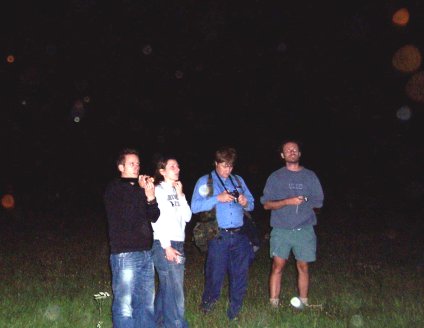 Next time I go on a ghost-hunt across fields, I should definitely not wear shorts!  I got nettled so many times... 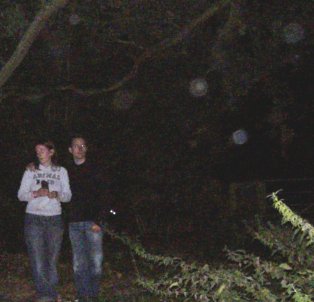 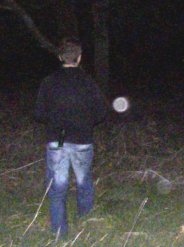 The photos above are more examples of the proximity of many of the orbs to Pete.  In the middle photo seems to be a double orb, almost like two orbs transposed upon one another. 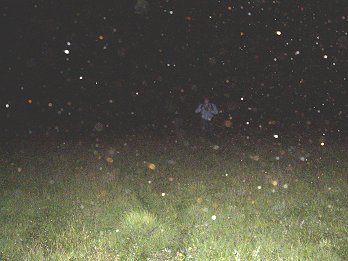 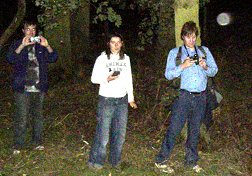 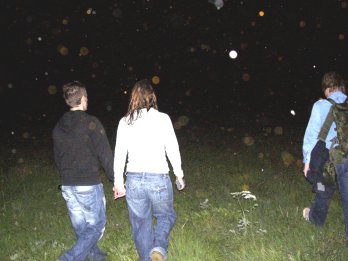 You know, when we go through all the photos we take on any particular ghost-hunt we have gotten to the stage where we reject dozens and dozens of images with just plain, ordinary orbs.  We know some ghost-hunters who never get any orbs at all.  Why is that?  Why do they appear in myriad swarms on one photo then disappear entirely the very next photo.  If they were dust caught in the camera flash would they not appear on all photos taken under similar conditions? 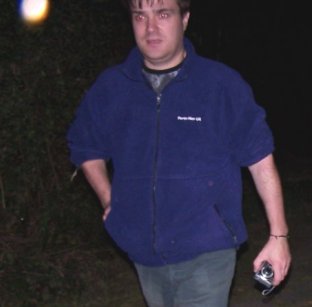 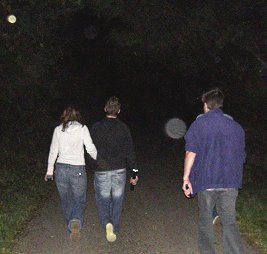 We think we have a pretty good idea who the spirit was who accompanied us that evening.  It's a personal thing, not to be divulged here, but several clues made themselves clear to us during the latter part of the ghost-hunt.  Any psychics reading this who are coming up with anything are most welcome to write in their readings: