We recently took the family to Shropshire for a short break during half-term.  On Thursday 2nd June we stayed at a wonderful old hotel called Rowton Castle, which is located on the road between Shrewsbury and Welshpool.  The four of us (myself, Mrs Darkstar and our two boys) stayed in a family room on the second floor, just above the entrance to the castle.  Although Mrs Darkstar is not exactly immune to the world of the paranormal, none of us could have anticipated the bizarre event that took place that night in Room 14. 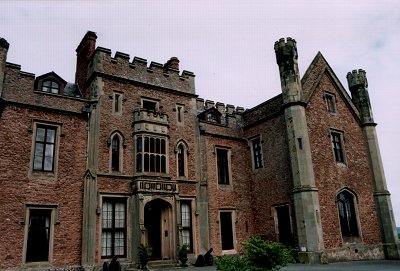 When we settled into our room that evening we needed to adjust the furniture to incorporate a 'z-bed' for our youngest son.  This involved shifting a coffee table, complete with the complimentary drinks and nibbles, to a position next to where Mrs Darkstar was to sleep.  The hotel had thoughtfully provided us with 3 bottles of mineral water, two of which were still and the third sparkling.  That evening we drank the two still bottles, and left the sparkling one on the coffee table unused.

During the night Mrs Darkstar woke up and couldn't get back to sleep.  It was the early hours of the morning, and still dark.  She heard a noise in the room, next to the bed beside her.  She sensed a presence in the room.  Then there was an unusual noise, and something seemed to fly across the room and strike the opposing wall.  Strangely, Mrs Darkstar was not frightened by this experience, and did nothing other than to try and go back to sleep.  However, in the morning she was more concerned about what had happened, and as she told me about it she couldn't understand why she hadn't reacted to it in some way.  Why had she simply not woken me up, as I was sleeping soundly right next to her?  This did seem a little odd.

We speculated as to whether she had experienced a ghost in this old castle, and my oldest son said that he had woken up in the night and seen a misty shape in the room.  He's a truthful lad, and we certainly couldn't rule this out.  After all, he has observed orbs moving in our house before now. We also considered the possibility that the noises might have been birds; there was a nest of swallows just outside our window, and the roof space above us may have contained bats.  This seemed a most likely explanation, but Mrs Darkstar was quite convinced that something else had actually been in the room during the night, and that the noises were in very close proximity to her.  Still, she was willing to consider the possibility that this was simply her half-awake mind playing tricks on her.

That, however, was not the end of the story...

Being a paranormal buff, I found this quite intriguing and on the way back to our room after breakfast I stopped by reception and asked whether there were any ghosts known to inhabit the castle.  The receptionist seemed a little coy about the issue, and then said that there had not been any incidents in Room 14 before.  However, down the corridor in Room 17 spooky things were known to have occurred.  She wouldn't elaborate on that, however.  We went straight back to our room and started to prepare our things before checking out. 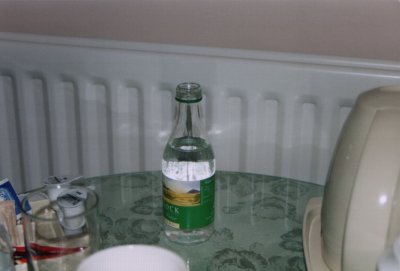 I was clearing the coffee table when I noticed that the bottle of sparkling water had no lid on it.  Yet, it remained full of water, which was just about still sparkling. The lid was nowhere to be seen, and I began to search for it.  This seemed a little odd; why would someone open the bottle but not take a drink?  I asked the boys, but neither had opened the bottle; as it happens, neither of them particularly care for fizzy drinks anyway.  They said that they hadn't touched it, and I believed them.  My oldest boy is like a camel and only drinks when one is placed firmly in front of him.  My youngest is too young to even open the seal on the bottle!

Mrs Darkstar then turned an unusual shade of white! She hadn't opened the bottle either, it transpired.  But she had suddenly realised what the strange noise in the night had been... 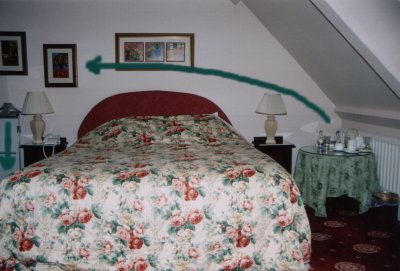 It had been the noise of a fizzy bottle being opened, complete with the sound of the release of carbon dioxide from the bottle.  The implication of this was that the next noise she had heard was a lid flying across the dark room and striking the wall.  I hadn't been able to find the lid by this time in the vicinity of the coffee table, and decided to follow my wife's line of reasoning and search for it on the other side of the room.

And there it was, slightly under the bed on my side.  Not only that, but the lid was crushed. 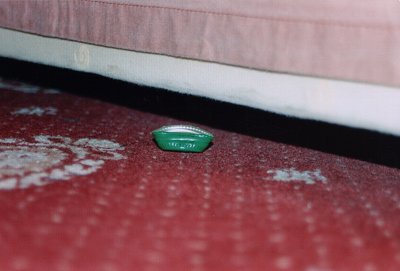 No one else had been in the room (the door had been locked in the night, and we had only told the staff about the strange encounter on our way back to the room; they couldn't have set this up, even if they had wanted to).  When you eliminate all the rational possibilities then you need to start to consider the irrational possibilities.

Had Mrs Darkstar felt the presence of the ghost which manifested sufficiently to remove the lid from a sealed bottle of water, crush it, then throw it across the room?  Had the rest of us managed to sleep through poltergeist activity?

It seemed crazy, but what other explanation was there?  If I had been sleep-walking, for instance, Mrs Darkstar would been very, very aware of me getting out of bed.  This had not been an unconscious "R-Whites" moment in the middle of the night!

It struck me that this event gave us a wonderful opportunity to test the psychic abilities of various Mediums we were in contact with.  I decided to bring the bottle and its gnarled lid back to Gloucester to perform a little experiment.  Firstly, and you might not quite believe this, we drank the water (waste not, wont not...)!  Two days later we were back home and took the bottle and lid to the Spiritualist Church for a reading. We told no one what we had, especially Martin, who facilitated our visit.  Well, it turned out that it was against various principles or old laws to carry our a reading on an inanimate object, but I did get a reading done on me which was enlightening to say the least (but that's another story...) 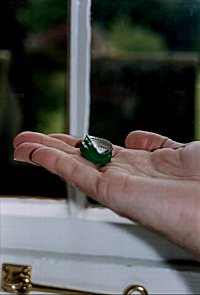 However, outside the environs of the Church I asked Martin if he would do a reading independently, and invited him to our house.  We then set up a little experiment, placing the bottle and lid on our kitchen table, along with 2 similar objects.  One was a semi-shattered vase (which had leaked water over our oak dining table whilst we had been away...grrrr), the other a chipped half pint glass.  We asked Martin to identify which of the objects was the one we were interested in and then do a reading.  We had told him absolutely nothing about the encounter at all, so he was doing this 'cold'.

Martin felt all the objects and said that he only picked up energy from the bottle (but strangely, not the accompanying lid).  The vase and glass we had presented as decoys gave off no energy at all. The bottle, however, had made his hands tingle.  He then gave us a reading, which rather impressively included a description of a stately home. He did a rough drawing of the front of it, not at all dissimilar to this photo (but without the characteristic castle features).

He said that the walls were pink, and that there were dark wooden beams in the rooms.  He also described a woman with pain in her head and chest. She was dressed in an old-fashioned way, possibly being a servant or cook.  Her dark hair was tied back in a bun.  She seemed to be stooped over (and, interestingly, the roof cuts off some of the head height in Room 14, especially over the coffee table, meaning that one has to stoop when standing in this position).  There's actually a painting in the main downstairs reception room at Rowton Castle that shows a lady whose dark hair is held back in a bun, although she doesn't look like the cook!

We were pretty impressed by this effort on Martin's part.  Mrs Darkstar then said that she was quite sure she had sensed the presence of a man, not a woman, during that spooky nocturnal encounter.  This seemed at odds with Martin's reading. Martin later spoke with one of the Mediums who was present at the Church when I had visited. I had not revealed the bottle and lid publicly.  Even so, the Medium told Martin that the object I had brought with me was a bottle, and that a woman was connected with it.

This seemed to corroborate his own reading.

I then wrote to the hotel for more details (no joy there; they seem a little uncomfortable with the whole subject of a ghost at their hotel) and a local historian in Shropshire, who was most helpful.  Mr Train wrote to me with the following details about Rowton Castle's history:

"A quick look at The Castles of Shropshire by Michael Jackson (Shropshire Books) offers the following on the castle:  "Site of castle long destroyed, situated w. of the 19c castle.  It is first mentioned in 1282 when destroyed by the Welsh [at that date probably by Llywellyn ap Gruffudd], but it was apparently soon rebuilt, possibly by the Lovells, and c. 1463 was acquired by the Lysters.  Saxton's map of 1577 shows the castle and a park.  During the Civil War it is reputed to have been besieged and destroyed by fire, but both siege and fire are thought to have been late 19c fabrications.  However it may have been damaged and abandoned during this period, as in 1645 it was reported that 'the enemy forces have quitted Rouse Castle' [another name for the castle - it was also called 'Routhsea Castle'].

"It was still standing in the late 17c, and in his will dated 1696, Richard Lyster instructs his executors to spend £1,000 to build a house 'upon the bank where the old castle stands or near thereunto'."  Among the sources quoted are Volume 30 of the Transaction of the Powys Land Club (the Montgomery Collections), pp. 236 - 41.  This seems to be the most substantial source referred to by Michael Jackson.""

He then recommended some books which might have more information in them, and I have placed them on order with my local library.  I'm hoping to ascertain whether the Castle's alterations during its history might explain why Martin didn't pick up its obvious castle-like appearance.  It would also be interesting to discover any clues as the identity of the ghost (if that's what it was).

As ever, I shall keep you posted if and when new information about this intriguing case comes to light.  I get the impression that the staff at Rowton Castle would rather not receive too much attention about their alleged ghost, but at least one of the many people we have told this story to plans on visiting the hotel in the near future.  So perhaps they should reconsider.  We certainly hope to return ourselves, although possibly to a different room next time.  Perhaps Room 17 would be good?

With thanks to Mr C. Train of the South West Shropshire Historical and Archaeological Society