My 2001 manuscript 'Winged Disk', which is regrettably no longer available, contained a lot of my research about the Messianic Star.  I offered the possibility that Nibiru had appeared during the Graeco-Roman era. The idea was that the Dark Star appeared in the solar system.  This bright red star, whose distorted halo created the effect of a burning red comet in a crescent shape, may have been the Star of Bethlehem.  It would have been accompanied by its 7 moons/planets.

The ancients of that time would have seen a bright red star in the sky, which may have been the source of the 'red Sirius' anomaly.  This star may have been visible for many years, in the vicinity of the Dog Star.  Viewers using telescopes (of which there is some evidence from that era - see Robert Temple's book "The Crystal Sun", which features a Greek artefact on the front cover clearly showing a man using a telescope) would have been able to discern more detail of this celestial phenomenon - the Winged Disk shape of the solar wind-distorted halo, and the 7 accompanying stars.

Nibiru, which is the name given by the ancient Sumerians to this phenomenon which had last appeared around 3760BCE, was then associated with the return of the King, or Lord, which became an astronomical marker for the Messianic fever of the time.

These coins show the importance of the event to the Romans in the centuries that followed.  They likely incorporated these symbols into their religious practices through the worship of the god Mithras, a cult which was of Persian origin. 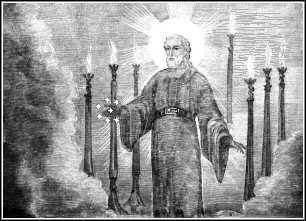 But the true impact of this event to modern minds would have been the crescendo of Messianic fervour at the time, most notably the rise and rise of Christianity.  The close association between the crescent and 7 stars, and the crucifixion of the classic dying and rising god can be seen in the Talisman of Orpheus, below.

The symbolism appears in other artefacts as well, presenting a running theme from that era. This theme became, I believe, secret knowledge, which was largely brushed aside as pagan beliefs were brutally discarded as Christianity developed its stranglehold over Western culture towards the end of the Roman era.

If the phenomenon of Nibiru did indeed appear in the sky in the decades around the time of Christ, then it would make some sense of the Second Coming promised by Jesus to his followers.  The return of the Celestial Lord would be anticipated by all subsequent generations.  Indeed, even the early Christians eagerly anticipated such an event in their lifetimes.

Perhaps this is why the crescent and seven stars became a prevalent symbol towards the end of the second century A.D. - The anticipation of the return had already begun to build up among the early Christians, and their power within the Roman empire was growing by that time.  Coins minted by emperors Hadrian, Commodus, Septimus Severus, Caracalla and Geta occurred within the same period (late second and early third centuries A.D.), and feature the crescent with between one and seven stars.  The reason for this sudden interest in celestial symbolism among a succession of Roman emperors is not clear among historians (4).  Was it a resurgence of a cult of Nibiru? 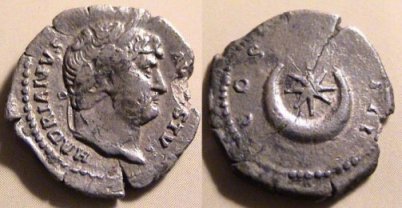 The following coin from the reign of Commodus is particularly interesting, because it seems to integrate the seven stars into one, showing perhaps how the link was made:

The appearance of this crescent with a single star embedded in it also seems to anticipate the much later usage of the same symbol by Islam.  This connection is strengthened by these Elymais coins issued during the reign of King Kamnaskires VI in the Persian region (6).  The timeline for his reign is thought to have been late 1st century/early 2nd century: 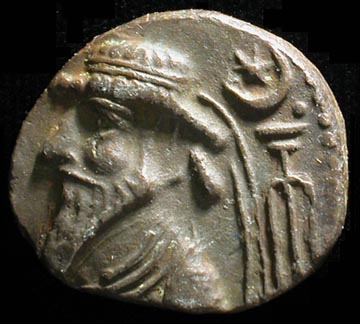 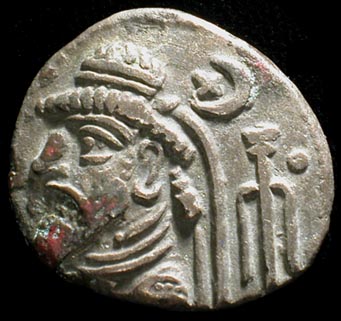 Take a careful look at the coin on the left.  Below the crescent and star can be seen a faded set of small circles.  They have been worn down over 2 millennia.  I suspect that these are the Dark Star's accompanying planets.  The Dark Star itself is the large sun-like star located within the crescent (its luminous halo).  The structure below the celestial symbolism may show some kind of archeo-astronomical marker.  It shares much with these older symbols, of the Stele of Nabonidus, and the Star and Crescent of a Harran coin: 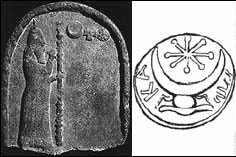 I suggest that this allows us to place the origin of this post-Messianic symbol back to the 1st century A.D. in the Persian region.  It follows on from the symbols of Nibiru going back to more ancient times still.

This creates an evolution of this symbolism over the millennia, through the different prevailing political and religious establishments as far as Islam.  It is an fascinating possibility that the re-emergence of the symbols of Nibiru, and the subsequent cascade of symbolism throughout the first millennium of this era may have originated with the appearance of Nibiru around the time of Christ.

Written by Andy Lloyd, 6th April 2009 with thanks to Martin Cosnette

7) "The Origin of Sin and the Queen of Heaven"