SOL AND MITHRAS (THE DARK STAR) 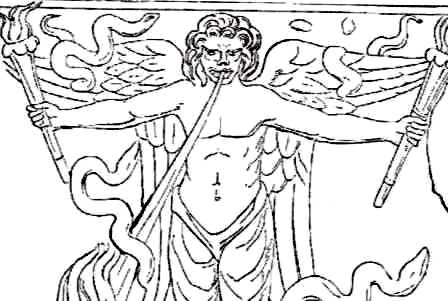 For many years now I’ve concurred with Andy Lloyd that the Dark Star, at perihelion, takes on a wing-like appearance of its own.

According to my research, this can also be said with the Roman god Mithras who also adorned a wing-like appearance when battling his counterpart Sol. (See image to the right)

So with this context in mind, is it possible that Mithras is actually our binary companion? To answer this question, see below:

From his book The Mysteries of Mithras ©2005 Author Payam Nabarz tells us:

“The name Mithra…has three meanings in Farsi: love, sun, and friend. Here in the name perhaps lies the key to the whole of the Mithraic mystery. The divinity is seen as Sun, or the light of sun…Most importantly, he is a friend, one who walks with us, side by side in fellowship. Mithra is the beloved, with whom the MAGI seek union.” Pg.5

The quote above is very interesting indeed stating that the Magi wanted to seek union with this sun. No doubt Mithras was “the sun of the Magi” referred to in biblical times.

What is more, Mithras was elevated to have sun-like qualities akin to Sol and long ago they both met in battle: 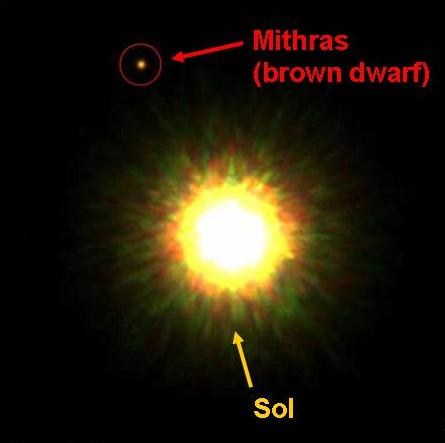 “The battle between Sol (the Sun) and Mithras results in Mithras overcoming the planetary sun and becoming the Invincible Sun. Sol kneels in front of...[Mithras] while Mithras holds the constellation Bear (Ursa Minor) in one hand. This emphasizes his power as a stellar god, one who moves the cosmic pole as well as causing the precession of equinoxes. Mithras and Sol then become friends and shake hands.” Pg.25

With this passage one can argue that Mithras (our Binary Companion) and the Sun came close to one another, at least once in the solar system’s distant past, causing celestial upheaval.

After the violent ordeal took place, Mithras and Sol came to an understanding, you might say, with Mithras eventually continuing on into the outer fringes of the solar system.

[It is also interesting to note that Mithras, the Dark Star, is associated with the constellation of Ursa Major, the Great Bear, during this 'observation', an association that was also suggested by Zecharia Sitchin's interpretation of Biblical verse, for part of the perihelion transit of Nibiru.  Andy]

The description of Mithras’ large elliptical path can be found in this ‘Mithras Liturgy’ passage:

“I am a star wandering about with thee, and shining forth out of the deep.” Greek Magical Papyri, circa 350 C.E.

Summing up, there is enough supporting evidence in Payam Nabarz’s book Mystery of Mithras to conclude that Mithras is our Brown Dwarf binary companion, a celestial god worshipped by the ancient Persians and Romans, able to bring about a new cosmic cycle and end an old one.

Andy Lloyd writes: Mithras and the Sun God are always portrayed as separate beings in Mithraic iconography. Yet, in Mithraic inscriptions, this cast-iron rule is often broken, with Mithras being identified with the Sun, in the guise of 'Sol Invictus'. So, it is quite reasonable to suppose that the Mithraists did indeed believe in the existence of two suns.  Mithraic scholars have noted that this is not as unusual as it may seem (1).

Platonic thought includes the idea of two suns.  The familiar Sun is complemented by an additional 'hypercosmic' sun, which is located beyond the sphere of the fixed stars. This ancient understanding might be a very simple interpretation of the distant orbit of a brown dwarf 'Sun' well beyond the spheres of the known planets.

The Chaldeans took the concept of the hypercosmic sun completely literally. According to Julian, this 'sun' travels "in the starless heavens far above the region of the fixed stars" (2).  Such an understanding is reflected in Zoroastrian teachings, although this connection may not be absolutely certain. More crucially, according to Hans Lewy;

"The Chaldeans distinguished between two fiery bodies: one possessed of a noetic nature and the visible sun.  The former was said to conduct the latter.  According to Proculs, the Chaldeans call the "solar world" situated in the supramundane region "entire light".  In another passage, this philosopher states that the supramundane sun was known to them as "time of time"..." (3)

If Mithras is indeed the Dark Star, as Greg and I both agree upon, then this Persian God, which was adopted by the Romans, is associated closely with a second sun, existing in a very real and spatial sense, beyond the known solar system. Mithras appears, born out of the rock, with a torch.  This visible 'perihelion' event is associated with the Bull, or the constellation Taurus, in Mithraic iconography. This places the perihelion of the Dark Star, as it was understood (and perhaps actually seen) in the Graeco-Roman era, firmly within Taurus.

Finally, here is another unusual quote attributable to Chaldean Magi, which may also show a connection between the visible appearance of the Dark Star, and the constellation of Leo, which then, with Taurus, gives us two markers for the perihelion transit:

"If thou often invokest it [Leo] then when no longer is Visible unto thee the Vault of the Heavens, when the Stars have lost their light, the lamp of the Moon is veiled, the Earth abideth not, and around thee darts the lightning flame, then all things will appear to thee in the form of a Lion!". (my emphasis) (4)

A lion-headed entity, associated with a crossed planet, is also a Mithraic icon (5), as can be seen to the right.

(4)  In the Introduction to W.W. Wescott, "The Chaldaean Oracles'

(5)  David Ulansey "Mithraism: The Cosmic Mysteries of Mithras", http://www.well.com/user/davidu/mithras.html with thanks to Damon