Our friend's farmhouse on the Gloucestershire/Worcestershire border is rife with apparitions and things that go bump in the night.  It's not helped recently that major structural and building work is being undertaken at the farm; an almost certain recipe for spiritual manifestation.  Another likely factor is a covered well under the kitchen.  Martin has seen a plethora of ghosts at the house itself, from children through to squires, all of them in period dress.  The farmhouse is likely to be about 300 years old.

Our investigations here have been on-going for some years, and we have published numerous photos on this site of orbs and the like.  This batch, taken during the middle of March 2006, were the result of the use of a brand new 6 mega-pixel digital camera.  We had heard from more sceptical sources that orbs would not appear on these higher definition images. 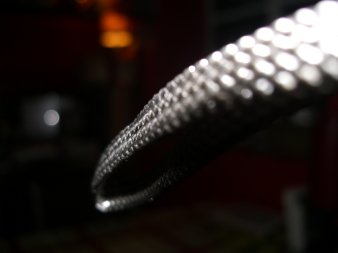 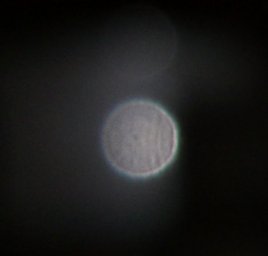 This photo was taken in an attempt to emulate a 'paranormal' photo published in a national magazine. The photo in question (which we can't reproduce here for copyright reasons) showed a white, curved streak across a dark image.  It seemed probable that the camera flash had picked up the camera strap, accidentally held in front of the lens.  Our attempt to reproduce the effect brought forward an unexpected addition in the form of this luminous orb.  What a beauty! 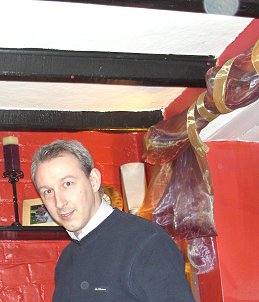 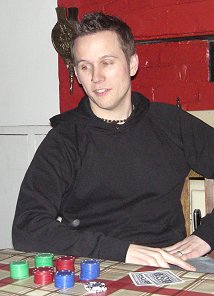 Here's a collection of ghastly creatures, we think you'll agree.  Lord only knows how anyone would manage if haunted by these nefarious entities.  As it turns out, these are simply the lads (Simon, Pete, Dave) at a poker game...what are less easy to explain are the distinct orbs located about their persons. 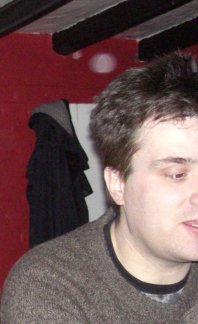 Note how the one above Dave's head appears to travel through the air...his spirit guide helping out with a straight flush perhaps?  He wishes...

When we visit the farmhouse we are all aware that unusual things happen there.  Martin sees many apparitions there, sometimes sat in chairs, often walking towards where a staircase was once located, or stood in doorways. He has seen a playful child who dodged in and out of a doorway as if playing hide and seek.  Of course, the rest of us do not see these spirits.  But other events allude to paranormal manifestations.  For instance, Martin was once being followed by a spirit from his own house.  He said in the car that I was probably sat next to the entity.  Upon arriving at the farmhouse we were all inside when there was a loud, distinct rap on the door.  Ali said it was probably her brother and went to the door.  No one was there.  The evening was still; there was no wind.  Our spirit companion had presumably been a bit slow getting out of the car!! 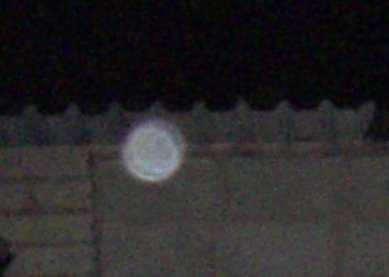 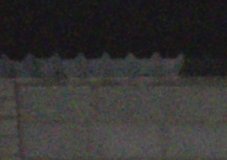 Martin and I had a walk around in the farmyard at night, taking photos and seeing if we could pick anything up.  Well, we picked up some orbs.  These two photos are taken in quick sequence; the first shows a clear orb, the second none.  Now you see it, now you don't... 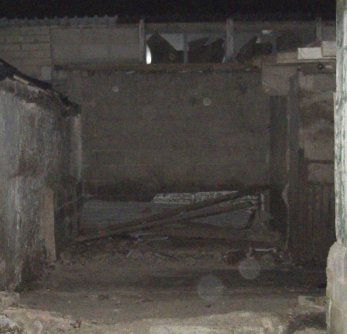 Here are more orb shots, from both outside and in.  Are all these orbs dust?  It's possible.  The work taking place outside the house will have created dust in the air.  But strangely, the photos taken where the work is actually taking place showed no dust at all.  These orbs were picked up round the back, away from the work area.  So the dust explanation does not entirely add up.

There will be more of these images to come over the course of the year, we are quite sure.