The Meaning of the Amulets

Well, I got to the bottom of the meaning of the Greek letters  'Iota Alpha Omega' on those amulets.  Sort of... Many thanks to all the people who wrote to me with snippets of information and ideas.  They constitute the name Iao, a rendition of the sacred name of the Hebrew God.  The cock-headed god Abrasax (Abraxas) was often called Iao Abrasax, and has Gnostic and Jewish elements attached to it.  It has connections to Mithras and Horus/Seth it appears, in keeping with much of my Dark Star material.  Here’s the data:

“The names of Iao, Sabaoth, Adonai, Eloai belong to the God of the Hebrews. Iao Sabaoth represents “JHVH (Jahveh) of hosts”; but in Gnostic and magical texts Sabaoth is often treated, not as a modifier of Jahveh, but as the name of an independent being.  Adonai is “Lord”; Eloai represents Elohim, God.  Iao and Sabaoth occur both together and separately on many scores of magical amulets.”

This is a complex picture that I must distil some more before writing a new web-page (or book???), but the immediate repercussions are these:   The celestial symbolism on these amulets is associated directly with the Hebrew God Yahweh.  This is very much in keeping with Zecharia Sitchin’s interpretation of the Book of Job, and the cosmic conflict between Yahweh and Leviathan (Nibiru/Marduk and Tiamat).  So Yahweh is associated directly with Nibiru, as the symbolism on the amulets shows.  Again, this indicates that the people of the Graeco-Roman period were reacting to the passage of Nibiru, and described the appearance of the anomalous Winged Disc and 7 stars in religious terms.  Nibiru, after all, was the Celestial Lord…Could it really also have been the Hebrew God Yahweh?  Zecharia Sitchin hints at this in 'The Cosmic Code' (p165) where he also highlights a IAO/Abraxas amulet.

"The Chaldæans call the God Dionysos (or Bacchus), Iao in the Phoenician tongue (instead of the Intelligible Light), and he is also called Sabaoth,* signifying that he is above the Seven poles, that is the Demiurgos."
Lydus, De Mensibus, 83. T
* This word is Chaldee, TzBAUT, meaning hosts; but there is also a word SHBOH, meaning "The Seven."

In the discussion of the Chaldean Oracles cited by Kathy, there is this interesting reference to the supposed source of the name of the Master Magus Zoroaster:


"The word Zoroaster is by various authorities differently derived: Kircher furnishes one of the most interesting derivations when he seeks to show that it comes from TzURA = a figure, and TzIUR = to fashion, ASH = fire, and STR = hidden; from these he gets the words Zairaster = fashioning images of hidden fire;—or Tzuraster = the image of secret things. Others derive it from Chaldee and Greek words meaning "a contemplator of the Stars."

One could derive from this the understanding that Zoroaster's name denoted not only an astronomical/astrological interest, but also a study of the hidden or secret fire!  So we are finding connections not only with Greek and Egyptian mythologies, but Syrian, Anatolian and now Chaldean traditions with these amulets and their inscriptions.

The cock-headed anguipede with his whip and shield (see 1114 &1159 above) represents a bizarre synthesis of the Persian solar diety (the cockerel) with the strange pair of serpentine 'legs'; and, likewise, Chnoubis (see 1134) brings together the evidently solar lion with the coiled wrappings of the celestial serpent.  In 'Dark Star' I have shown how the dark star symbolism appears to bring together both solar and hidden, serpentine or draconic motifs; natural enough when considering a hidden dark 'sun'. These Graeco-Roman amulets appear to cover similar ground, whilst adding new influences from the Middle East and Palestine.  They also give us the Name of God in the form of the ever-present Iao.  There is much here to contemplate.

This Graeco-Roman fresco is among the many treasures found among the catacombs of Kom el-Shugafa, the 'hill of potsherds', located south-west of Alexandria in Egypt. 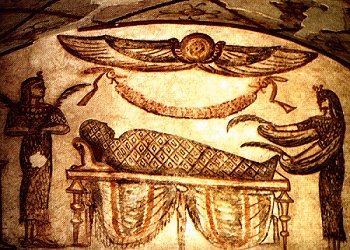 Dating to the 1st and 2nd centuries AD, the Kom el-Shugafa relics are a curious blend of Egyptian, Roman and Greek influences.

Here we see a classic ancient Egyptian mummy protected by deities, and lying below an unusual winged disc.  It appears to be riding upon a celestial barge which is red in colour.

If Nibiru made an appearance in the skies around the time of Christ, then this image is precisely the kind of thing we would expect to see daubed upon the catacomb walls of Graeco-Roman Egypt.

On a recent trip to Chester in the North of England I paid a visit to the cathedral with my family.  At the entrance was a font with some remarkable imagery on it, dating back a couple of hundred years. Photography is not permitted within the cathedral, so I took a long-exposure shot without a flash so as not to upset anyone there.  As a result the image (left) is a little blurred.  Nevertheless, one can make out the salient features.

This is quite clearly a Winged Disc in an English cathedral.  Not only that, but the central disc contains the ancient Christian symbols Chi and Rho, as well as Alpha and Omega.  This shows that the creator of the font was deliberately setting the piece in the style of the Graeco-Roman era.

The birds become the disc's wings, and their legs wrap around to the two flowers, creating a visual effect similar to the Uraei serpents of the Egyptian Winged Disc.  Is this occult symbolism, designed to link Christ with Pagan astronomical symbols?  If so, then it could not be more prominently placed in English Christendom.  'Hidden in clear sight of all'.