It might strike the reader as a little odd that clues about the existence of Nibiru could be found among the bizarre treatises of the mediaeval alchemists.

In DarkStar16 I touched upon the image of the triple-headed alchemical dragon 'Azoth' (1) whose serpentine tails culminate in a trinity that belies the general assumption of Sol-Luna duality.  The right hand solar disc is evidently anomalous, and includes two red wings, or horns, and a red cross, both symbolic of Nibiru.

Why is this unusual imagery part of Alchemy?  Our general perception of these artificers is of a misguided band of proto-chemists who were obsessed with the possibility of transmuting base metals into gold.  Undoubtedly, this represents part of what they were about, and much of the symbolism and imagery they used can be identified with their seemingly impossible task of chemical transformation. 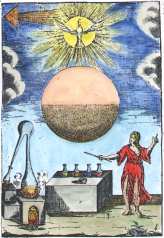 But, as can be seen from the alchemical image on the left (2), the laboratory where the transmutations were attempted was simply the focal point of much wider, and deeper imagery (3).

The alchemists used a tremendous amount of celestial symbolism, and I will be providing a series of examples to highlight where the Dark Star becomes manifest in Alchemy.

This particular engraving shows the white dove-like 'Hermes Bird' flying up to the Sun, while a trianglular shaped fiery comet crosses the skies behind it.  The half-moon provides the foreground, showing us the layering of the celestial spheres of the trinity.

As we shall see, the red triangle is a oft-used alchemical symbol for the third celestial body in the Trinity.  A broader discussion of the significance of the 'celestial trinity' can be found in my essay 'The Secret Knowledge of Nibiru',  serialised in 'Paranoia: The Conspiracy Reader' Magazine in 2002.

The Origins of Alchemy 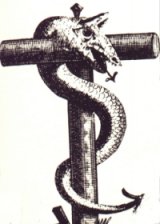 The mediaeval alchemists appear to have inherited their 'knowledge' from the Hermeticists of Hellenised Egypt, but the precise origin of their Art remains mysterious.  Johannes Fabricius considers it likely that Alchemy may be as old as the 4th Century BC, and that the central figure of Hermes Trismegistus was derived from the ancient Egyptian god Thoth (4).  Subsequently, Alchemy came to Western Europe, via Sicily and Spain, in the Twelfth and Thirteenth Centuries.  Fabricius explains how:


"The first scientists of the West were philosophical and mystical types to whom practical alchemy was a branch of a comprehensive philosophical system.  Their ideas rested on the Hermetic doctrines formulated by Alexandrian science and Greek alchemy and disseminated throughout the Roman Empire on the wings of syncretism.  Due to this development, the Hermetic docrtines became saturated with a number of mystical teachings and myths, such as astrology and Gnosticism, Orfic speculation and Eleusinian mystery religion, the worship of Isis and Osiris, the worship of Serapis and Sol Invictus, the teachings preserved by Nestorians, Monophysites, and Manichees in Persia, Syria and Iraq.  This heritage did not pass directly to the Western alchemists, it went through an important intermediate link - the Arabs"  (4). 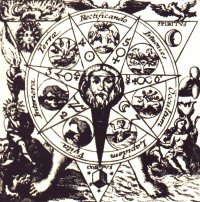 Readers of my book 'Winged Disc: The Dark Star Theory' will recognise that many of the above religions and mystery schools have common elements with the cult of the dark star.  Kurt Seligmann considered Alchemy to be a little less old, an important point when trying to date the appearance of Nibiru.

Pointing out that Pliny the Elder (23-79AD) did not include alchemical ideas in his metallurgical writings, Seligmann prefers the 2nd Century AD as the time when alchemy began to emerge (5).

Interestingly, the knowledge of metals, as described by the 4th Century alchemist Zosimus of Panopolis, is said to date back to the time of the 'fallen angels'; the mysterious sons of God, or Nephilim (5).

Alchemy uses a tremendous amount of celestial imagery to put across its esoteric ideas (7).  The images are often accompanied by short texts which can appear quite unfathomable.  It is easy to let our own perspective colour our interpretation of the inner meaning of these glyphs and symbols, and there is plenty of material in the alchemical literature for esotericists to get their teeth into (6).

Johannes Fabricius puts forward the notion that the underlying message of Alchemy is Freudian, for instance, an idea I reject outright.  But it is evident that the symbols that the alchemists borrowed from the many sources listed in the quotation above were used to put across quite different ideas.  In particular, the derivation of physical or spiritual gold from base metals, or base humanity.

Each metal was symbolised by one of the seven planets of astrology; Sol, Luna, Mercury, Venus, Mars , Jupiter and Saturn.  Yet, as we can see from this image, there is often an eighth component.  It appears like a second sun, often red or orange (8).  What could it possibly be?  The analysts on alchemy are vague on this point, sticking fairly rigidly to the idea of a Sol/Luna duality.  Yet, this third usuper, often appearing the dominant partner of the three (as in this image) belies this simple analysis.  Could it be Nibiru, a brown dwarf in a retrograde elliptical orbit around the Sun?  I think this is highly likely.

Note how the rendition of this second sun is accompanied by a coronal cloak strongly reminiscent of the Winged Disc.  Note also how the central figure of the Alchemist is seen holding Masonic symbols, and how the central red circle contains a glowing Star above a dark orb, denoting the hidden star.  We are moving into mysterious, and heretical, territory.


The left-hand image above (9) extends this connection between alchemy, the dark star and Freemasonry.  A red sun takes centre stage within a 'Seal of Solomon'.  This emblem has been linked with the conjunction of opposites, composed, as it is, of the 'triangles of the sun and moon' (4).  In the next image (10) this combined symbol is found within a trinity, below which are 7 hidden figures.  To me, this suggests that the dark star is the 'child' of the alchemical synthesis of the Sun and Moon, and is associated with a further 7 hidden stars (its moons).

The birth of the Philosopher's Son plays an important part within the textual references in the alchemical literature, accompanied by the Latin inscriptions: "Pater eius Sol" (His father is the Sun) and "Mater eius Luna" (His mother is the Moon) (4).  Thus we attain our celestial trinity.  Although this third image is a little unclear here, the Winged Disc contains the Seal of Solomon, and appears in addition to the 'standard' set of planets (11). 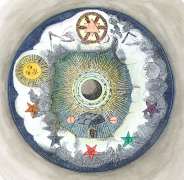 Many consider that the Winged Disc is simply the sun.  But how would this work within alchemy?  How can the sun be the 'son' of the moon and sun?  The alchemists talked of hermaphrodites, and the there are certainly a lot of bizarre goings-on in their treatises.  Even so, this makes little sense, and the next image will show how this symbol was clearly used quite separately from that of the Sun:


It seems to me that the alchemists were speaking of a new celestial entity being created by the amalgamation of the Sun and Moon, and although this can readily be understood within esoteric teachings and psychotherapy, in terms of astronomy or astrology this is a more difficult problem to reconcile.  In the absence of an additional, hidden body in the solar system that could vie with the sun and moon for our attention, this problem is impossible to solve.  The ancient knowledge about the existence of Nibiru, however, opens a whole new dimension to the argument.

The image above shows a semi-circle of the sun, the 5 visible planets and the moon (12).  At the top sits the Seal of Soloman, or the Star of David, surrounded by Masonic symbols.

At the centre of the image lies a glowing dark orb, which possibly represents a solar eclipse.  But if that central image indicates the amalgamation of the sun and moon during the eclipse, then what does the Seal of Soloman depict?

It cannot be the sun, because that symbol is already present.  Does it represent God?  Or possibly the 'Celestial Lord', the dark star Nibiru?

As we shall see in the next paper, the answer to this puzzle lies in alchemy's symbol of the 'Red King'.

These woodcuts have been coloured by the webmaster of : http://www.levity.com/alchemy/home.html