This is the fourth instalment about the paranormal investigations carried out by the 'Gloster Ghosts' team, consisting of Martin and Dave Cosnette and Andy Lloyd.  This page shows numerous orbs as well as inexplicable 'mists' and self-luminous gravestones!  We also describe some of the physical evidence encountered as we sought ghostly encounters in a graveyard in Deerhurst, Gloucestershire on Hallowe'en night, 2004. 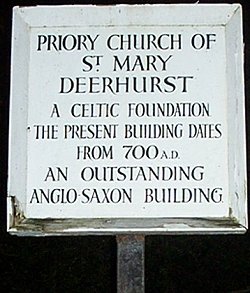 The church at Deerhurst is somewhat isolated, off the road between Gloucester and Tewkesbury.  The Church of St Mary dates from 700AD, as can be seen from the welcoming sign near the road.  However, the atmosphere, was not at all welcoming.  Martin and I were just starting to walk around the rural graveyard about 9pm, and a local resident walked out from his house to se what we were up to; he must have figured that we were paranormal buffs because he went back into his house.  Nevertheless, we were a bit wary of upsetting the locals so time was of the essence.

The evening's weather was perfect; cool, but not cold.  No wind, but no moisture in the air either.  We took a temperature reading with a digital thermometer when we first entered the graveyard and it read 46-47 degrees Fahrenheit.

But within 5 minutes the temperature had plunged to 35 degrees! 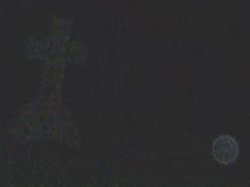 We both felt much colder, like we had walked into a fridge, yet the weather around us seemed to have remained constant.  There was no mist patch or wind to explain the temperature drop, and the temperature upon leaving the graveyard was the same as when we first entered it.  It seemed to be the very air around us that had chilled; a welcoming sign of things to come! 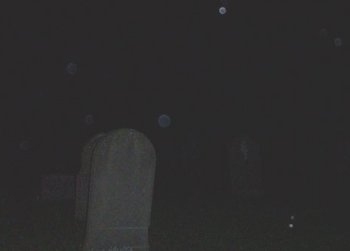 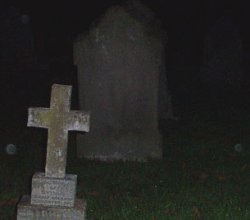 Our orb pictures were generally ones taken at the beginning of our investigation and are reminiscent of previous orbs captured in other locations.  Again, the atmospheric conditions were really very good, with no discernible moisture in the air, or dew on the ground.  Inquiries made of Spiritualists have gleaned some interesting opinion; that the colour of the orbs seen/photographed have a hierarchical nature.  It is said that darker orbs are at a lower spiritual energy, whilst blue, white and yellow orbs are of the highest form.  There's no way of proving this, of course, but it's interesting nonetheless. 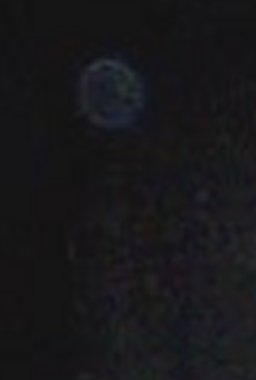 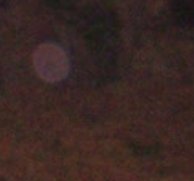 These orbs are more coloured, mostly reflective of the scene behind; whether it be stone, evergreen trees, or fallen autumn leaves.  This seems to imply transparency, or refraction at the very least.  But look at the yellow orb here: 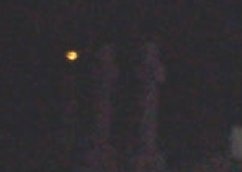 We don't remember any yellow point light sources around.  Martin can see children in this picture sat at the bottom of the gravestones.  He also felt the presence of spirit children when he first entered the graveyard.  Perhaps the yellow orb is some sort of guardian spirit? 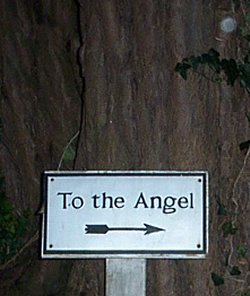 This luminous orb appear quite milky, not at all like the colours of the tree behind. I had just remarked about 'The Angel' before taking a picture of this sign.  A little odd perhaps.  We were also hearing lots of small, nearby sounds, like scratching gravel and rustling of leaves, adding to the atmosphere somewhat (not to mention the owl!).  The air remained very still, though.  There was absolutely no wind at all.  Very odd.  Martin also reported seeing a white orb. 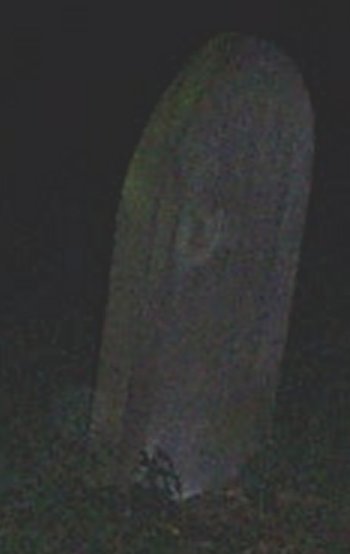 As the investigation continued, I was getting increasingly spooked.  perhaps it was just the feeling that we had upset the neighbours by walking through the graveyard at night, perhaps it was something more sinister.  The temperature drop had freaked me out; I simply couldn't explain how the surrounding temperature had dropped 12 degrees Fahrenheit in just a few minutes.  It certainly felt cold enough, but how was this possible?

Martin often experiences apparitions/ghosts/spirits in physical form, rather than in his mind, and we wondered whether he would be seeing something tonight, Hallowe'en night in a still and silent graveyard in the Gloucestershire countryside.  As it turned out, he heard something rather than saw it.  Martin heard three knocks near to the church (and these can clearly be heard on out audio tape recording), but more significantly was the female voice that spoke the words "You're here", almost in song.  Martin tried speaking back to it to get the presence to say something else. The gravestone he was near to had the name 'Annie', but he heard nothing else.

Looking through out photos we saw this interesting image.  the gravestone seems to be lit from its base. There is a faint orb to the left, but the light at the base has grass in front of it, meaning that it can't just be a reflected piece of dust or water droplet between the stone and the camera.  The grass remains dark however, giving the light at the base of the stone some additional, and puzzling, context.

The most incredible piece of evidence from this particular investigation, however, are the images of unseen self-luminous mists.  Two of these were taken towards the end of the visit, just after Martin's auditory encounter with 'Annie'. 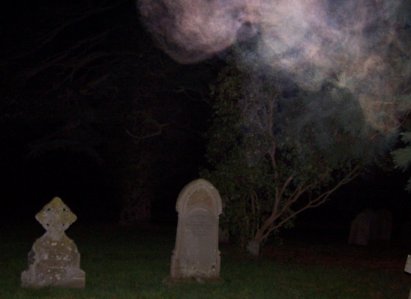 This picture is just amazing, isn't it?  Yikes! Yvette Fielding's "Paranormal Magazine" (UK) thought it was amazing too; they included it in their paranormal Gallery in issue 5 (March 2006).

Note that we don't smoke, and saw no signs of smoke or mist whatsoever at the time that the photos were taken. See if you can explain exactly what these 'mists' are.  One theory is that they show ectoplasm, which is closely associated with Martin's own spiritual energy.  The appearance of ectoplasm may be a precursor to a manifestation of the spirit, which would indicate that we are close to 'seeing' a ghost during one of our investigations. 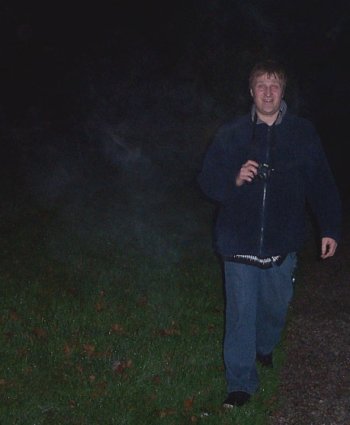 The second 'mist' looks like a big fat bloke walking alongside Martin.  The dude is going to need seriously exorcising, huh?  Or was that exercising? Just kidding, Mart! 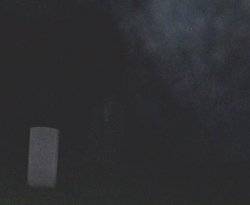 Our evening came to a fairly abrupt end.  The neighbour decided to let his dog out, which set off his main outside light, and brought us to a prompt conclusion that we should make our escape.  But we checked the temperature again, and it was back to 47 degrees, and was the same all the way home.  Very constant.  So we feel confident that the temperature drop can be associated with the auditory voice of 'Annie', and the incredible manifestation of unseen mists on random digital images.  Altogether, not a bad night at all. 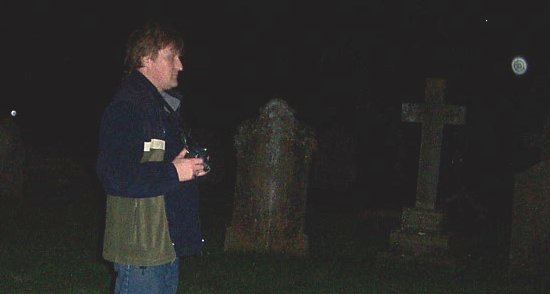 We returned to Deerhurst churchyard a year later to see if we could reproduce our findings of the year before.  During this particular visit we did not encounter anything particularly paranormal ourselves, but did come away with the following images: 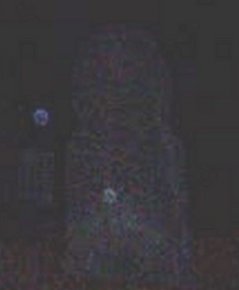 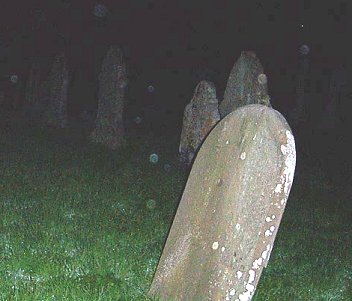 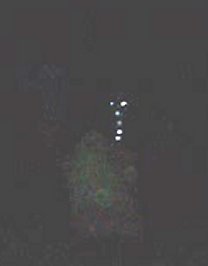 The orbs speak for themselves, but we're flummoxed by the bright object behind the gravestone on the last of these three images.  It's a highly reflective object, to be sure.  Possibly the plastic wrapper covering a bunch of flowers?  But then the reflective points aren't following the lines of a sheet of clear plastic wrapping, as you would perhaps expect.  It's certainly an odd photo.  Take a look at the following image which has been published by the paranormal researcher Dr Roger Leir.  He considers this image to be alien in origin.  Compare it with the third image above.  Not dissimilar, wouldn't you say?

We made some audio recordings at Deerhurst during this particular ghost-hunt.  The recording picked up some loud retorts, which sound like gunfire or explosions.  It wasn't a particularly windy night, and neither Martin nor I heard anything untoward.  What is interesting is that this churchyard adjoins the extensive Tewkesbury Civil War battlefield.  Could we have picked up some residual energy from that historic event?  We're working on trying to get the audio file onto this website for readers to make up their own minds.

To finish off, here's a blow-up of a beautiful orange orb.