This page continues our exploration of the paranormal side of Gloucester, an ancient city built upon the graves of countless historic city folk.  In a moment we will discuss an eventful ghost hunt, but first a look at some photos sent to us by Jacky, a ghost-hunter from Gloucester who has also been snapping some extraordinary digital photos in churchyards in the area. 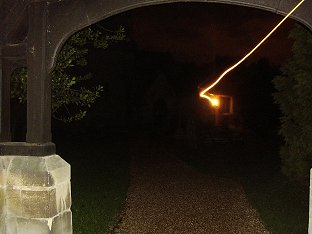 Taken in Hardwicke Churchyard in November 2005. A puzzling yellow streak of light seems to join up a distant light source with the foreground of them photo. 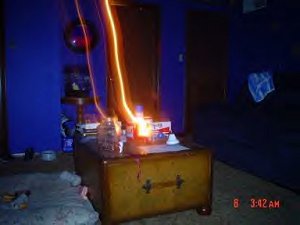 Compare with this image previously shown on our website.  This seems to be a camera effect distorting the light.  It seems likely that this kind of light distortion effect is a camera-orientated anomaly, probably due to some small movement at the time of taking the image.  Otherwise, it is hard to reconcile how the Hardwicke light streak could simultaneously be sourced in the background and the foreground of the photo. 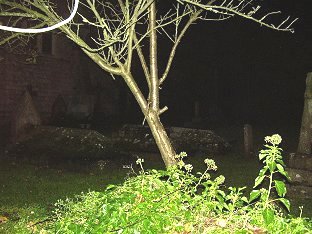 These three images were taken during a later ghost hunt at Edge Church.  Jacky said that this environment was by far the creepiest of the locations she visited. 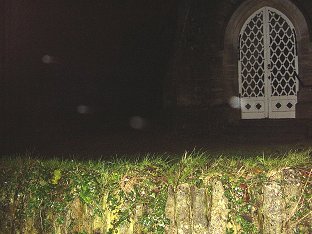 The area was completely dark, and her daughter, who was also participating in the ghost hunt, felt very uneasy there. 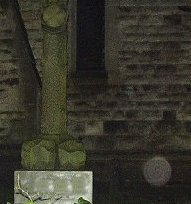 The white line in the first photo is presumably a foreground object, like a thin camera strap, caught in the fierce light of the flash.  We see a similar example in another photo in a moment.   The orbs are more interesting from a potentially paranormal point of view.  And notice that wonderfully phallic tombstone in the right-hand photo (I've rubbed out the name on the stone to protect the identity of the person interred under this remarkable piece of sculpture). 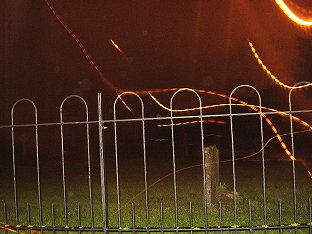 This image, taken at Quedgeley churchyard in December 2005, contains a number of competing effects.  The environment is well lit, so these light streaks are likely to be the same kind of camera-induced effect playing off these bright light sources located above the photo.  But notice how the lines are broken up in this instance.  The red haze is more interesting, though; not a particularly common feature of these night-time photos, even when light sources are present.  Then there are a set of orbs.  Quite an interesting photo, we think. 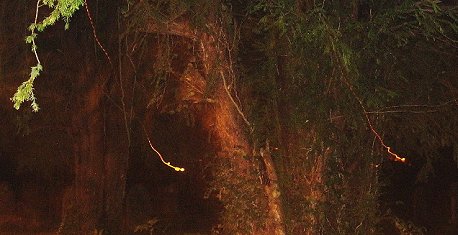 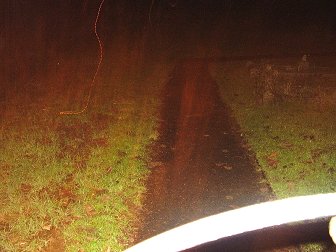 These images, again taken by Jacky in December 2005, are at Ebley Churchyard.  That white line on the right-hand photo is seen closer up this time, and seems to be a camera strap with an accompanying fingertip.  Both photos show reddening, which is particularly acute in the right hand picture.  Here it is almost seen to come out of the ground, with the appearance of an aurora.  The yellow light streak which is also present may indicate a bright light source above the photo, although it seems to be a distant light source if it is, and thus incapable of creating the red mists.

In the left-hand photo we have more examples of the distortion of 2 distant light sources behind the trees, which are presumably street lamps.  Again, the distorted light moves across the foreground in front of the trees.  Jacky suspects this effect is something to do with the way she's taking the photos, and we tend to agree.  The brush-like patterns of the red mists are more difficult to explain.

Thanks to Jacky for these wonderful images!

We recently had the opportunity to make the acquaintance of Steve Shipp, of Twilight Books, and his partner Sue.  They both have a keen interest in the paranormal, and travelled up from Devon, visiting us as part of a vacation.  We met up with them at Gloucester's most haunted pub, the 'Dick Whittington' (the fabled 'thrice Lord Mayor of London' was from Gloucester originally). 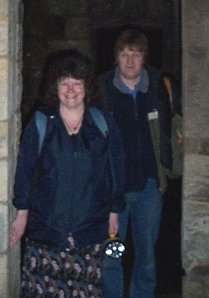 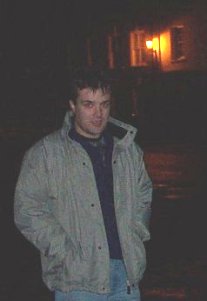 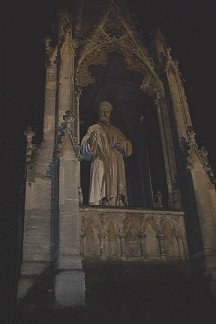 Our evening got off to a good start: they were serving 'Over the Moon' real ale made by the 'Dark Star Brewing Company'.  Having just had a book entitled 'Dark Star' published, this struck me as a remarkable and meaningful coincidence - boding well for the ghost-hunt later that evening!

Most of our photos were taken in two locations; at Blackfriars, and outside the Cathedral.  We began by taking a look at a rather odd piece of artwork in the Mary de Crypt churchyard. 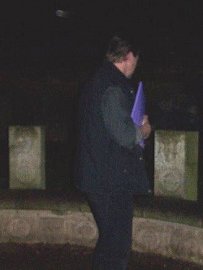 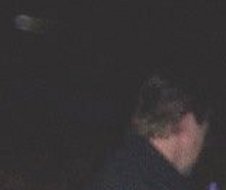 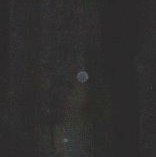 The curved stone-bench has some upright stones with graven images of the Green Man and various lower spirits.  Quite an incongruous addition to a Christian graveyard.  Steve can be seen taking a look, with a moving orb in attendance. 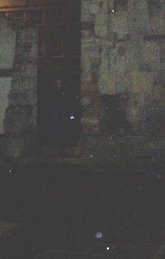 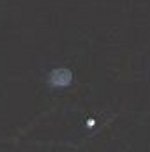 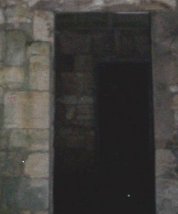 Martin, Sue and I explored the ruins of Blackfriars, where we sensed a presence and located cold spots.  We didn't get a lot of orbs that night, but the ones we did get were in the Blackfriars area and were very clear indeed.  This indicates to me that the orbs were not a general environment-related phenomenon, but were specific to the location where we picked up something other-worldly present. 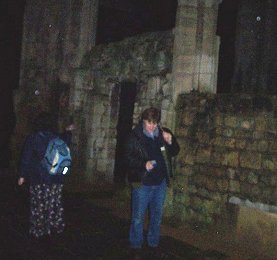 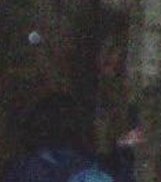 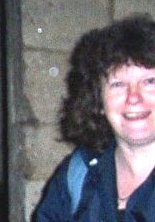 These images contain some surprises.  I didn't spot them at first, I'll admit, but Steve and Sue rang our paranormal hotline after seeing this webpage and told us that figures could be seen.  Dark outlines are seen on the walls in this photo, to the right of Sue and Martin respectively.  Now, that might just be a trick of the light on the brickwork.  But check out the pinkish highlights within the picture in the centre.  A face seems to look across above Sue's head.  This looks like an apparition of a woman wearing a cloak, an effect made more convincing by the dark outline around the 'figure'.  Of course, there are orbs present as well. Interesting, eh? 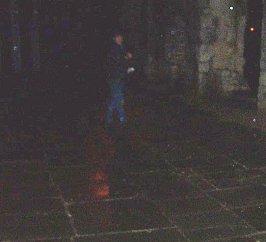 Here's another odd photo.  Stood just outside Blackfriars, Martin appears to send a shadow through some reflected red light on the pavement.  Yet it is not at all clear where the source of the red light is.  The red light reflection is not apparent on any of the other photographs taken that night (of which there are over 100). 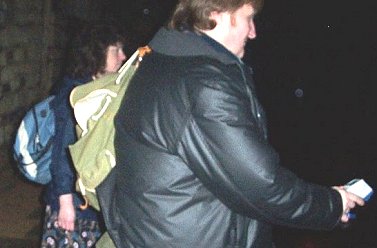 Also, several clear orbs can be seen on the photo (the red one is presumably a distant street light on Brunswick Road).  The photo above shows an orb each for Sue and Mart.  Spirit guides? 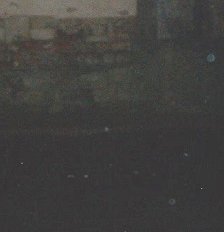 We left the Greyfriars area and headed towards the Cathedral.  A slightly odd thing happened on the way.  I phoned my wife at home on my mobile phone and after hanging up received a phone call back.  The phone established that the call originated from our house, but when I answered it there was no one on the other end of the line.  This seemed strange, so I phoned my wife again.  It turned out she hadn't rung me at all...Strange indeed. 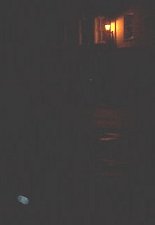 Gloucester's cathedral is a magnificent gothic building and was the setting for many scenes in the early Harry Potter films.  At 11pm it was shut and locked up and there was clearly no chance of a ghost-hunt in the cathedral itself.  As we wandered through the car-park outside the front entrance I saw a dark shadow swiftly move through the gates.  I was mildly stunned.  This movement of darkness was very clear, and I was looking directly at the Cathedral entrance at the time.  I had seen my first Black Abbot-type apparition!  And it had gone straight into the Cathedral.

We walked around the building taking photographs and temperature readings.  Sue and Martin seemed to be instinctively attracted to a large wooden side-door set at the top of a small flight of stone steps.  Steve and I chatted while the two of them inspected the door. 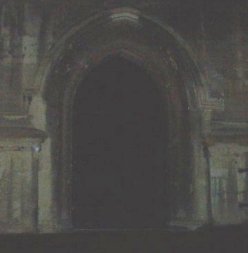 Suddenly: "It's hot!" yelled Martin, who had just taken his hand off the handle of the door.  Well, a hot handle at 11pm on a January night seems an oddity, does it not?

As Sue confirmed the warmth of the door handle herself we all heard a deep thumping noise from inside the depths of the Cathedral.  It was very clear and we were all startled by it.  The Cathedral was clearly locked and empty; there were no lights showing through the windows. We all wondered what could have made such a loud noise. 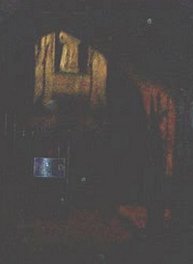 Then it happened again!  Martin set up an EVP recorder on the step by the door to record in our absence whilst we walked Sue and Steve back to their car.  Later we discovered further banging noises on the recording.  The photos I took around the door showed no orbs.  It seems as though the source of the thumping noises was safely inside the Cathedral itself...the Black Abbot I had just seen move through the entrance gate perhaps?