This photo showing a remarkable flowing orb, or series of orbs, was taken in the graveyard at Hartpury Church, Gloucestershire, on the night of 12th January 2005. 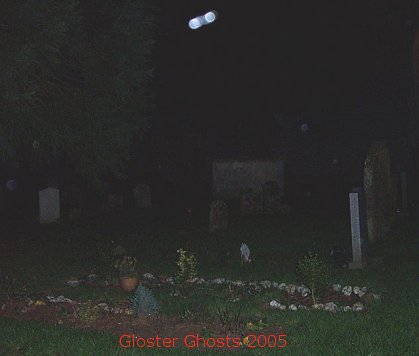 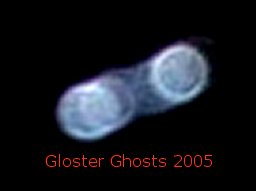 It was the latest in a series of paranormal investigations carried out by Martin Cosnette and Andy Lloyd of 'Gloster Ghosts'.  The night was quite eventful, including severe local temperature drops, visual sightings of 2 ghosts, auditory disturbances, disembodied voices and equipment failures.

And, of course, we came away with photos containing literally hundreds of orbs, including the strange ones pictured above.  Several orbs can be seen on the image, of various different colours; red, brown, blue and the bright bluish white ones in the centre. The close-up of these reveals rather disconcerting detail.  The left hand orb in the series appears to contain the profile of a man looking to the left.  The right hand one seems to show the face of a baby and we think we can see a woman in the orb second left.

The orbs have been photographed over freshly dug graves, and are by far the brightest we have yet taken. 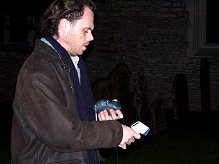 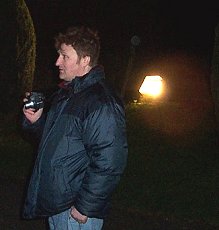 The record for the coldest night in England stands at minus 16 Centigrade, and the evening of 12th January, although clear and crisp, was hardly of that order.  There was no frost on the ground, and little condensation from our exhaled breath.  It simply should not have been minus 10 Centigrade that night.  No way. 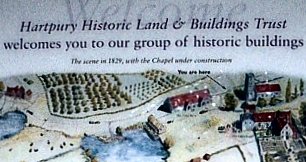 And yet... the laser thermometer consistently showed temperatures in the range of minus 8 to minus 10 degrees Centigrade.  And it felt cold too.  But when we walked into adjoining fields which were similarly exposed to the elements, the temperature was about minus 4 or 5. 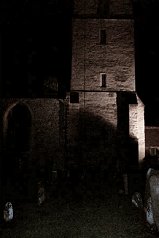 So, it's not surprising that we had a bumper crop of orb photos that night. 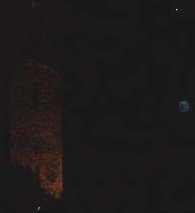 At that point in time Martin was hearing a succession of voices, but was unable to make out what was being said.  He felt a 'ringing in his ears', and had called me over to the spot to investigate.  We also captured some clear orbs on the digital camera around this time, in the vicinity of a wooden bench: 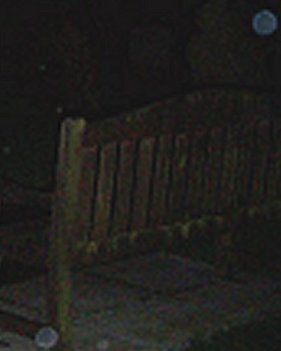 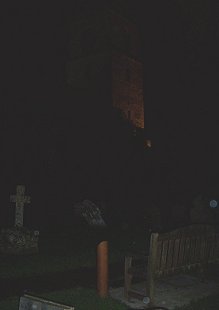 Martin was carrying a small tape recorder but this malfunctioned after ten minutes, which approximated to this event. So nothing was picked up on tape, unfortunately. In the space of half an hour we took about 100 photos, and captured literally dozens of orbs on film, far too many to show them all here.  But here are some of the more notable examples: 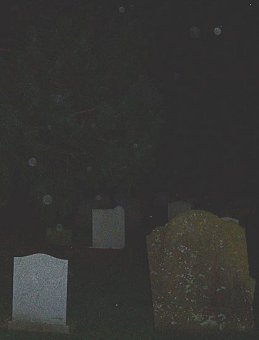 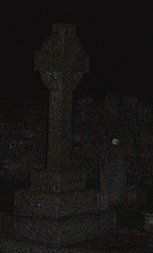 During the investigation each of us saw a ghost.  Martin saw a white figure and Andy saw a shadowy figure move in front of a gravestone and then disappear.  These were both transitory events which were too quick to capture on film.  However, on looking through the photo we did seem to pick up some anomalies which, frankly, look a bit weird when blown up: 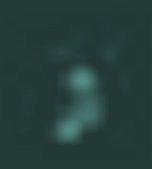 This bright object above a gravestone seems out of place.  I'm not sure what to make of it, but martin and his brother Dave can see the face and hand of a woman here.  The next example is weirder still, this one showing two objects in the sky above Martin (below left).  They look like a couple of Pokémons, don't they? I've also included a further photo (below right) taken a moment or two later showing an orb that Martin is looking directly at; not for the first time!

At the point that we left the graveyard, the temperature had returned to a more normal minus 2 Centigrade, and random readings on the way home were similar to this figure.  This is the third investigation in a row that has been accompanied by a sudden, pronounced drop in temperature.  This is a hallmark of paranormal activity.  Activity that seems to be increasing with every investigation.