Continuing our investigation into the phenomenon of 'orbs' on digital photographs, the 'Gloster Ghosts' team visited a famous old battlefield in Tewkesbury, Gloucestershire, to see if we could record further examples. We were not to be disappointed.  We deliberately chose a clear night in early October, 2004.  It had rained heavily during the day several times, which should have cleared the air of dust particles, pollen etc.  There was also a good autumnal breeze and the stars were very clear, indicating good atmospheric conditions.  A low yellowish moon provided a nice backdrop as well, as can be seen in the middle photo below, next to a blue orb:

We started by visiting a field on the outskirts of Tewkesbury, just at the end of the 'Battle Trail', which marks the area of the Battle Of Tewkesbury in 1471, during the War of the Roses.  The battle claimed 2000 lives.  Both Andy  and Martin witnessed a moving blue orb, low to the ground in the field during our short visit. However, the camera did not pick up anything unusual.  We next visited the fields adjacent to Tewkesbury Abbey and set about taking many digital photographs.

Martin, who has sensitivities towards the spirit worlds (and would be called a 'Physical Medium') heard some anomalous sounds in the field; musket fire in the form of a volley of shots, drums and the sounds of a child crying.  All of the sounds were quite loud to Martin.  Dave heard the crying noises, Andy heard nothing at all.  Perhaps the crying was from a nearby residence, although that was some distance away.  It's odd that we didn't all hear the same things; precluding a misidentification of a natural or mechanical noise.

Anyway, one of the things we all noticed is that on several occasions when the flash of the camera lit up the area, we could see the orbs with the naked eye, which seemed to encompass quite a large area, possibly as far as 2-3 feet.  But this certainly didn't happen all the time, meaning that it wasn't a constant phenomenon, like dust.  Also, the orbs that have appeared on the photos are much less numerous than what we experienced visually.

These pictures seem to show Martin looking directly at orbs. Also note the blue orb in front of Dave's right shoulder, and the apparent motion of the bright white orb.  Apart from that one white orb, all the rest that appeared on the photos were blue.  None of them were grey, which we captured so many of in Birtsmorton.  Those transparent grey 'orbs' seem more likely to be dust, possibly as a result of the harvesting going on in the area that day, whereas these blue and white orbs are something completely different; as noted previously, the atmospheric conditions in Tewkesbury were perfect that night.

We were using two cameras, but the orbs were picked up on only one of them.  We noticed that the other camera had a slower shutter speed set, and was subsequently blurring static objects, like distant street lights.  Yet no orbs appeared on those photographs at all, perhaps indicating that the orbs are only picked up on a very fast shutter speed.  For future investigations we will set the camera to the 'Sports' setting.

Dave and Martin Cosnette were updating this page for Cosmic Conspiracies, our sister site, when they realised to their absolute amazement that one of the photographs shown on this page has a ghost on it.  For a whole year we had this on the web and never even noticed.  The figure is quite clearly that of a roundhead soldier, which fits with the battleground history of this historic site.

The figure appears to show armour on the shoulders, and a distinctive helmet.  The chest is covered with a tabard, and a belt is also evident, which appears to be reddish.  The artistic impression of the roundhead (shown alongside) shows a yellow sash, but other examples we have found have been red or brown.  There appear to be a gauntlet on his left hand.  The colours of this figure's clothes are quite different from those worn by Martin, who was wearing a reflective blue jacket.  Given that I took the photo, it rules me out as well!

The following sequence of images shows the original photo, showing the mysterious figure in the centre.  This is then brightened to highlight the figure better, and the third picture colour-enhanced to bring out the detail.  This third image also seems to show the legs of the figure.  The figure appears to be behind Dave by about 10 feet, and the perspective is spot on.  The other thing to note is that there are two excellent orbs in this image, which seems a bit of a coincidence, doesn't it?

Hallowe'en night is, of course, an excellent opportunity for a ghost hunt. The evening got off to a flying start even before we left my house!  Martin witnessed a ghost materialising in the hallway, but it disappeared before distinctive features could be made out. Not the first time things have been seen in my hallway, it has to be said.

The weather that evening was perfect, and Dave, Martin and I headed off for Tewkesbury to look for ghosts on the battlefields.  We weren't the only ghost-hunters out and about; we came across a coach-load of punters listening to stories of the ancient town's spectral denizens.  Most of them seemed to be really getting into it, if you take into account the fact that they were dressed in mediaeval garb! 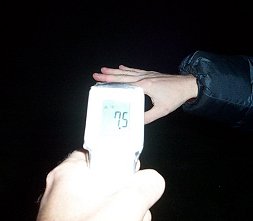 But we weren't as interested in the stories as much as the real ghosts.  We meandered across the field behind the Abbey, taking photos and monitoring the background temperature (around 5 Celsius on average).  Martin's right hand went really cold at one stage.  He felt that something supernatural was holding his hand.

We trained the temperature recorder on his hand and arms, and there was indeed a tremendous drop on the hand in question.  Other areas of skin showed readings of about 25-30 Celsius, as one would expect on that chilly evening, but his right hand would not climb above 8 Celsius (see image to the right).

This went on for some considerable time, and we carried out many control experiments to check whether this was just an experimental anomaly. Other hands showed 'normal' readings.  Doggedly, the temperature of Martin's right hand stayed low...

Then we totally freaked out a group of teenagers hanging around in the field!  I guess they thought we were barking mad, but there can't have been a lot of entertainment for them in the centre of that huge field that evening.  Perhaps their presence kept the ghosts away, but they were helpful in a different way because one of the kids recommended that we explore the 'main' battlefield behind the council offices, and gave us directions.  Off we went.

The kid was right.  We were in for quite a night of it.

The 'real' battlefield at Tewkesbury is a bit off the beaten track.  There is a common area of land set within groves of trees and bushes.  It felt removed from the reality of the suburb it sits next to, and one could imagine being back in mediaeval times during the Civil War there.

Anomalously, we experienced a huge temperature drop in this environment.  The temperature had been consistently about 5 Celsius, or above, all evening.  But in this sheltered spot it plummeted, reaching a incongruous minus 3 Celsius.  Now, it shouldn't have been anywhere near that on the evening in question. There was no ground-frost, or mist, or dew falling (although the ground was already wet from rain earlier in the day).  Yet, the air became icily cold whilst we walked about.

The photographs we took in this battlefield were full of orbs, mists and strange lights:

This mist only appeared on the one photo, and is very strange indeed.  Condensation from the photographer's breath would not have risen into the air like this, and if it was condensation, then why does it not appear on other photos?  There are orbs to the right of the mist, and a single orange light above Dave (to the left), which may have been a street light.  We can make out faces in this mist, the biggest one of which dwarfs Dave, and actually looks like it's about to eat him!  We tried to recreate the mist effect from condensation from exhaled breath, but didn't get very far, as you can see from the photo of Martin on the right.  Not really of the same order of magnitude, is it? (Looks like Martin's about to break out into song, nightclub singer-style!)

We noticed on several photos that a red light kept appearing around Martin.  Initially, we thought this was a street light too, but then remembered that Martin was generally farther into the field, and so any photos of him had an entirely dark backdrop.  Here's a selection; (and we wouldn't put you through having to look at the third one of these mugshots unless we absolutely had to!)...

Notice how much the red light varies in height, which is a bit odd if it's a static background object set back some distance, like a street lamp.  You would expect it to retain a roughly similar height with respect to Martin if it's set back several hundred feet.  But despite this, we can't entirely rule out the possibility that these particular photos were taken at a point when Martin's back was to the road.

Another anomaly that we experienced was that my camera kept draining energy and turning itself off.  This has only happened once before, and that was at Winchcombe when we experienced a similar inexplicable drop in temperature.  Make of that what you will.

Then we had orbs a-plenty.  Too many to do justice to here, anyway.  And that red light's appeared again...

All in all, quite a good, spooky night.

Ghosts at Deerhurst on Hallowe'en Night!