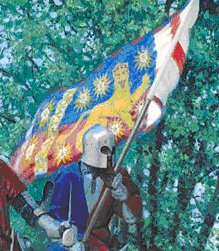 Following recent successful ghost-hunts to the Tewkesbury battlefields, Martin and I returned on a warm summer night and toured the area on foot.  Martin had been experiencing a lot of paranormal activity during the day and seemed to be tuned in on a psychic level.  It promised to be a good night.

We worked through our usual routines; monitoring temperature fluctuations, taking many digital images on a random basis, scoping the area with a night-sight camera.  As usual, I came up with a better crop of orb photos, many of which can be seen here.  The best images were taken when Martin was experiencing some very unusual sensations; a foreboding of an apparition yet to appear.  And appear it did...on horseback!

Martin was getting pretty freaked out as we entered one of the battlefields.  Now Martin is a pretty steady, calm guy.  It's unusual for him to react strongly to anything.  But he was wired at that point.  I started firing off photo flashes and, bingo!  Three images in a row of the same spot, showing a swarm of orbs.  Something was on its way in:

What Martin experienced next was a ghost of a soldier on horseback.  The horse was huge; like a shire horse, and the soldier was wearing mediaeval armour.  Martin could clearly make out an emblem on the cloth draped over the horse.  He's been hunting around for the emblem on the Internet.  It looked like this: 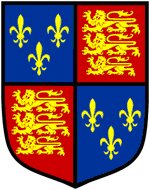 This corresponds with the colours of King Edward IV, the victor in the battle of Tewkesbury.  Martin had seen a ghost of one of the Yorkist cavalry who had taken part in the bloody battle of 4th May 1471.  Here's some historical background about the battle itself:

"Having reclaimed the throne of England and defeated the Earl of Warwick at the battle of Barnet, the Yorkist King, Edward IV, marched his forces from London to intercept those of Margaret of Anjou (wife of the Lancastrian Henry VI) and her son, Prince Edward, who had landed at Weymouth and were heading for Wales where supporters awaited them.  Denied entry to Gloucester and it's bridge over the River Severn, Margaret was forced to march her exhausted army to the next crossing point - at Tewkesbury. Here, with the Royal army hard on their heels and insufficient time to cross the river, they turned to confront their pursuers, the two armies meeting on the 4th May 1471.

"Following a heavy bombardment from the King's artillery, Edmund Beaufort, Duke of Somerset, led the Lancastrian right wing through the deep ditches and hedges that intersected the battlefield and attacked the Yorkist left, under the command of Edward's younger brother Richard, Duke of Gloucester. However, the other Lancastrian divisions failed to support the attack and Somerset's men were soon outflanked and routed, the rest of Margaret's army disintegrating in defeat.  The remainder of the Lancastrian army soon gave way and ran from the battlefield back into Tewkesbury pursued by the Yorkists. Many were slaughtered on the way including the Prince of Wales, Wenlock and Devon. The Duke of Somerset and a number of other Lancastrian fugitives tried to hide in Tewkesbury Abbey, but were dragged out, tried and beheaded."

Now, Martin has seen a great many ghosts in his time, but this apparition seemed to leave quite an impression.  We continued through the field.  A little later Martin saw a dark shadow across the ground in front of him.  This was quite impossible: it was beyond twilight by that point, and there were no strong light sources at all.  Martin seemed to think that the shadow was cast with the light-source to the south.  Was he experiencing a vision of a shadow cast by a daytime ghost, or a shadow-man?  I couldn't see the shadow at all, but I dutifully took photos.  This is what Imy digital camera recorded:

On the right-hand image you can see Martin pointing at the shadow he was seeing.  What a spectacular orb right in front of him.  I was stood to the south of Martin, in the direction of his invisible light-source.  That means that the object casting the shadow would have been stood exactly where those large orbs are...between Martin and me.  Freaky huh?  And if you think that large orb is dust you need your head examining.  It's beautifully focussed and massive.  To be this big as a piece of dust it would have to be right up against the camera flash.  But...if that was the case then it wouldn't be picked up by the camera at all, let alone show the kind of superbly focused detail apparent here.  If the camera is automatically focussing on the dust, and it's really near the camera to be appearing this big, then why is Martin so clearly focussed?