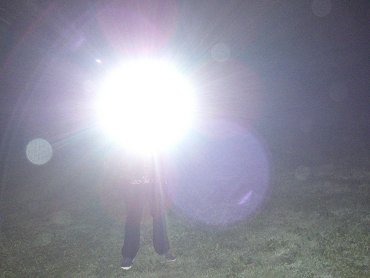 We did a very special ghost-hunt on the anniversary of the Battle of Tewkesbury.  The Gloucestershire town is surrounded by an ancient battlefield which saw a great loss of life in 1471, during the War of the Roses.  We have done ghost-hunts in this area several times before, with excellent results.  This time we visited the area with a group of 5 of us in all, including 2 mediums from the Cheltenham Spiritualist Church, armed with several digital cameras, a digital thermometer and an EVP reader.

The first image, above, might look like an exceptional orb, but in fact it was the full moon that night; an auspicious sign for a great night!

It was a warm evening, and the area was awash with the sounds of Led Zeppelin.... Perhaps an unusual tribute to the ghosts of lost English soldiers, but that seemed to be the music of choice for the people hanging around the area that evening.  For we were not alone!  A battle re-enactment had taken place that day, and there was a party going on in one of the fields.  We adjourned to another, quieter field and stopped about two thirds of the way into the field.  It turned out to be an oddly fine choice...we discovered a place of high paranormal activity, a vortex of sorts.

We took hundreds of photos that evening.  Many of them had orbs on them.  Some people have suggested that these orbs are insects.  If they were, we must have been travelling through a locust swarm!!  This first photo shows what we suspect to be an actual insect captured in flight by the flash of the digital camera.  You can see the difference between this irregular bright shape and the orbs.    We captured a second similar image later on; another insect, we think.  So, the orbs can't be insects as well.  Are they specks of dust instead?  These next two images are VERY strange indeed, and are food for thought:

All of the other photos have focussed in the middle distance.  Yet, these two images seem to be focussed on a point closer to the camera.  Like the camera is trying to focus on something other than the people in the centre of the images.  This is very odd behaviour for this new 6 mega-pixel camera.  The camera doesn't seem to have focused on anything at all, but it sure did pick up a lot of orbs!  Yet they're not entirely in focus either.  Is the camera trying to focus on a spirit materialising in the field between the photos' subjects and the camera?  Is such a materialisation accompanied by these myriad orbs?  It seems strange that such a mass of orbs should appear on the out-of-focus photo...It's almost like the camera has taken a picture of a sheet of glass covered in water droplets.

These next set of images are more in keeping with our 'normal' orb photos:

Take a look at the middle image of the three.  To the left of Dave is a shadow across the ground...at least it appears to be a shadow.  I doesn't actually seem to be cast by anything, though, and there are several good orbs around it.  Is this further evidence for the materialisation of a ghost?  We think so...this is a shadowman.  This appears to be the entity which had been creating all these orbs.  It was centred around a certain spot on the field; the orbs would appear there, but nowhere else.  We marked the spot with a stick; the centre of the vortex. 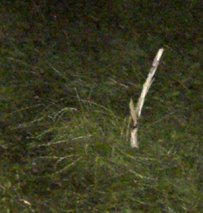 This picture shows the stick; the grass around it appears to be flattened in an unusual manner, with a circular dark patch around it.  We didn't notice this in the dark, but it is evident here; almost like a swirl of energy has transfigured the spot.  Our mediums, Martin and Marilyn, certainly seemed attracted to it.

We began taking temperature readings around this area.  Now, remember that this was a relatively warm and clear summer evening.  We had taken a lot of background temperature readings at about 12 - 15 Celsius.  What we were getting here in the vortex was much, much lower; down to 1 degree Celsius.  That's just above freezing point folks.  Don't believe us?  Here's a photo we took of one of the readings:

This was way too cold for a summer night in Gloucestershire just after sundown.  We have had various sceptics suggest to us that our equipment must have been malfunctioning.  Piffle.  We took a range of readings over a period of time.  When we moved away for the 'vortex' the temperatures climbed.  After we left the battlefield we took more control readings and they were above 10 Celsius.  There really was a cold spot in that field, and we could all feel it as well.  It was pretty chilly!

It was around about this point that Martin exclaimed to the group that his left hand had suddenly gone very cold indeed.  He felt that he was in physical contact with the entity in our midst.  We immediately took some photos, one of which is on the right here.  Note the wonderful orb! Martin is holding his left hand up for us to take laser digital temperature readings.  We ran a little experiment, taking the temperatures of three of the group, Martin, Dave and Marilyn.  Martin's hand registered a temperature of 6 Celsius; he was clinically dead, folks!  We took recordings of Dave's hand, then Marilyn's hand.  They both registered about 30 degrees.  We went around again; Mart 7, Dave 29, Marilyn 30.  Then again; the same, then again, the same!

The thermometer was not malfunctioning.  It consistently recorded anomalous readings on Martin's cold hand, and consistently registered normal temperatures on the control group.  That's science, folks.  You can't disregard the data, just because it's damned weird.  You just have to try and explain it.

We suggest this was paranormal. We had a myriad of orbs, a de-focusing camera, a shadowman captured on camera, a vortex whirling the grass, a temperature drop around the vortex and now a refrigerated hand on one of our mediums.  Sceptics will have to come up with something a bit better than 'malfunctioning equipment' to explain this lot away...

The 'orbs-are-dust' argument suffered a fatal blow that night, too.  We caught our mother-load of orbs in a quiet field literally off the beaten path.  But we later went into the field where the re-enactment crowd were gathered.  We took photos along the entrance to their camp, which had been churned up by bikes, cars, vans, people.  And guess what...we took about 40 photos, and very, very few orbs were found.  Yet this area must have been more dusty than the quiet grassy field we had found the vortex in.  Figure that out, dust-sceptics.  The orbs we took pictures of weren't dust particles.

Here are two images of our mediums, Martin and Marilyn, showing large orbs on or above their shoulders.  I would suggest that these orbs are connected with their spirit guides.  If the one at Martin's left shoulder is a dust particle, then why is the light from it translucent?  You can see his shoulder through it, perfectly! It's hard to figure out how a speck of dust could create that effect.

Here are some just terrific images.  The picture on the left shows an orb in the sky which, by the look of how focussed it is, appears to be above the heads of the group.  As well as luminous.  Hard to see how this could be dust.  The middle picture has a cloud of orbs, some more focussed than others.  Let's assume that these are dust particles, close to the camera, caught in the glare of the flash, as is often suggested to us.  Would it not be the case that these tiny specks of dust would be eradicated from the image, in the same way that a speck on the lens would be invisible on the image?    The picture on the right shows Marilyn with a bright orb above her head.  Indeed, we had a few pictures like this, with stunning orbs above us.  Take these ones for example:

Were we accompanied by spirit guides, making themselves known through these personalised orbs?  These are self-luminous orbs; really bright in contrast with the rest of the picture. What are the chances of three orbs lining themselves up over the three subjects in the picture?  Quite a long shot, we think.

It's worth bearing in mind that although we experienced physical changes in the field, neither of our two mediums picked up any psychic messages, or such like.  We don't have any particular reason for this...but at least our intrepid ghost-hunters weren't tempted to ham it up!  What happened, happened.  And it was a set of physical and environmental changes which caught our collective attention on this occasion. 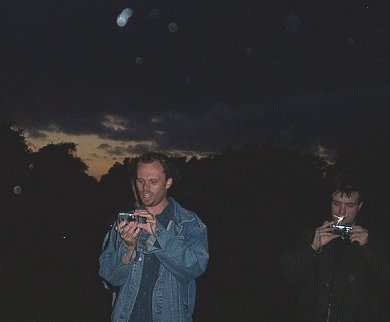 There's a lot going on in this picture.  Moving orbs, still orbs, and a weird light effect between Dave's camera and his face.  Or is it an insect picking up the light? We suspect that it's a moth, in actual fact, but who knows?  It's an odd effect.  The moving blue orb at the top is more interesting. 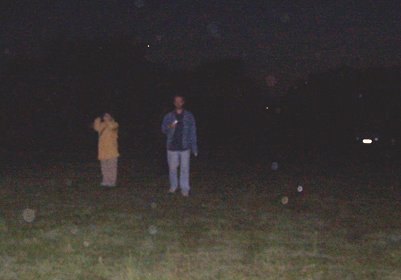 The bright white light to the right of this image is the number plate of a car which was parked in the field, together with a headlight on either side of it.  The orbs in the picture show a vast variation in colours.  Why?  If they were just grey/white dust particles light-blasted by white flash-light, then wouldn't they all appear just white, or pale grey?  There are no other light sources in the scene to provide alternative colours, so why are they all coloured?  More like these are coloured orbs in their own right.

These orbs are milky and irregular in shape, and seem to have a rough surface, without any prominent defining features.  They are not self-luminous either, but what makes them quite interesting is their size.  In contrast, the next picture has a beautiful bright red orb.  How can this possibly be dust?

The last image is rather good too.  There are two prominent orbs, one large one above Martin's head, as so many others in this group, and a completely different one towards the ground, which is milky and appears to be in motion.  We had a great harvest of orbs, and phenomena that night.

Our next ghost-hunt to the area brought forth several actual ghosts: