Hollybush is a small village in Worcestershire, on the road between Tewkesbury and Eastnor Castle.  It is located on the east-facing side of the southern-most Malvern hill, and is close to the farm where our friend  "Geordie" lives, in nearby Birtsmorten.  The farm is a Mecca of paranormal activity, as we have revealed before.  Geordie (pictured below left) is himself sceptical, but Martin has seen so many ghosts in that house it's starting to take on the feel of a spiritual Grand Central Station. Here are a couple of interesting images taken in the farmhouse recently:

It seems like everywhere near Birtsmorten has some kind of haunting going on, and nearby Hollybush Church is no exception.  We have it on good authority locally that the Church is haunted.  It is also remote and quiet; an exceptional spot for a ghost-hunt.  Martin and I visited the churchyard on the evening of Monday 2nd May, just after sunset.  We took over 250 images, and most of them showed orbs.  Over 50 of the images showed excellent orbs, and multiple orbs; too many to show in entirety here.  But we have picked the best to share with you.  There was also some very strange activity that night, which we shall now describe for you.

It was a still night, with some cloud cover which later cleared.  There were no insects or midges that we detected as we walked around.  If orbs are simply midges, as some contest, then we should have realised it when we took the photos: because it is clear that some of these images show literally dozens of orbs, many of them in motion.  A Biblical plague of insects, perhaps?  Er, no....We detected no insects at all.  I think we can safely eliminate the possibility that the orbs are flying insects.

We had our trusty laser thermometer with us and took some initial background readings back at the farm.  Between 7 (on grass) and 10 degrees (on track) Celsius; it was a mild night.  There was no dew falling, and relatively clear views indicated little humidity in the air.  So we can eliminate the possibility that these orbs are reflected rain-drops, or anything like that.  Here are 4 images where an orb is photographed over a particular area on several distinct occasions:

Is the orb a spirit standing over its own gravestone?  It makes you wonder.  Anyway, we knew something was strange that night from the temperature readings we took there.  The temperature dropped down as far as 1 degree Celsius, significantly lower than our background readings.  It felt very cold as well, and I found myself shivering on several occasions, despite my jumper.  I had several orbs in attendance as well:

Martin felt the presence of a spirit, and felt that this spirit may have once been a soldier.  Martin was experiencing pressure on his head, like that of an injury. It seemed to me that Martin was particularly tuned in and attentive to environmental changes that evening, as he meandered around the churchyard at Hollybush:

I decided to 'tune in' a bit too.  This was because Martin had told me that he had heard footfalls in the undergrowth.  I heard one quite distinctly by a gravestone, and it sounded like it had been made by something heavy.  As we stood quietly under some trees, the crunching, footstep-like sounds occurred very close to us, right at the base of one of the trees, in fact.  Perhaps it was around that time that Martin took this remarkable photograph: 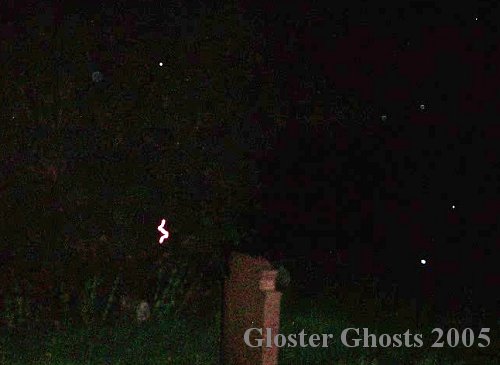 Sometimes you get these quirky, self-illuminated zig-zags of light where you think street-lamps might have been.  But this is clearly not a light at all: it is towards ground level and is in front of a large bush.  This red zig-zag of light, which we have nick-named "the Snake", is right in the foreground of the picture.

Given the reasonably good focus of the rest of the picture, together with a myriad of stationary orbs, one has to wonder what this phenomenon is?  We certainly felt like we were onto something that evening, and this picture seems to sound that gut feeling out.

These images were taken in sequence, showing how the orbs varied over just a very short period of time.  The only other physical phenomena I can think of that might explain them would be pollen, given the time of the year.  But one should bear in mind that many of the other photos we took, under very similar circumstances, showed absolutely no orbs at all.  If the air was this saturated with pollen, then surely every photo would show the same set of effects?  The variability of the range of images we took suggests otherwise.  This remains a phenomenon that is not readily explained.