Ghosthunt at the Docks 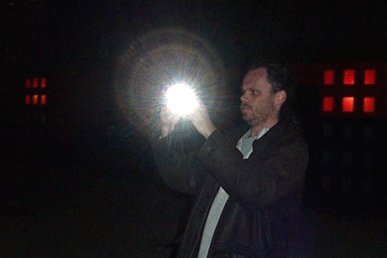 After we had seen Jean and unwound a bit from the claustrophobic seating arrangements, Martin and I wandered down to the docks with our cameras to see if we could get some good orb photos.  After all, the evening should have opened us both up to the world of spirit, and Martin had been seeing strange things all day.  The evening was also clear and crisp, with the Spring stars already in the firmament.

I had my new Casio EX-Z110 digital camera, which had already provided us with some good 6 mega-pixel images of orbs.  Generally, I tend to get the orb photos, rather than Martin, which is a fact that neither of us can explain.  After all, he's the one with the psychic ability, not me!  Still, there it is.  This evening proved to be no exception.  Perhaps helped by a black cat crossing our path!

We had an EMF meter running, and found a distinct hotspot in an area of the Gloucester Docks currently being re-paved.  Photographs taken there picked up several good-sized orbs.  The spot was just outside the Mariner's Chapel, which has been extensively cleaned recently.  I argued that the spot might have been hot because of an underground electric cable feeding apartment blocks nearby, but this explanation wasn't water-tight.  For starters, if a cable had been there it would have been poorly insulated to be that active.  The EMF signal also fluctuated wildly from nothing to maximum readings.  This didn't seem consistent with a regular current to the building behind the chapel.  Which was the other problem with that explanation; such a cable would have had to have gone beneath the chapel.  Unlikely, we thought.

Jean Kelford had pointed out several times that spirits were attracted to water, to the point where they often visit mediums who are sat on the loo! Well, taking that to its logical conclusion, the Docks should prove to be the repository of many a ghost ship.  Well, take a look at this:

This seems to be the mother of all nautical orbs!  Seems rather too magnificent to be merely a speck of dust reflected in the camera flash, wouldn't you say?  That's one for the sceptics and debunkers to get their heads around, I think.

This is a beautiful view of the refurbished areas of the Docks, now full of life with new occupied apartments.  Are the new denizens of this area living amongst the ghosts of the past? It makes you wonder, doesn't it.  After all, a lot of factors weigh heavily in that direction.  The still water source, the process of re-building and the history of the place.  then there are all of these orb photos!

Have a close look at the right hand image.  Below the orb appears to be a skull-like face discernable within the dark patch.  Weird, huh?

Jean Kelford is a medium and author of 2 books, "Oblivious but True" and "Is it You, or is it Spirit?"  She appeared - in physical form - at Ottakar's bookshop in Gloucester on the evening of 3rd April 2006, to talk about her life and lead a psychic workshop.  The audience were, as they often are with such gatherings, predominantly female, and the seating was arranged in such a way that we were all bunched up together very closely.  That, together with the wooden chairs, made the whole thing feel a bit more like a school-room than a bookshop, and this feeling was exacerbated by the realisation that Jean herself had once been a Maths teacher!

Her professional grounding in pedagogy didn't show through too much in her presentation style though.  Jean was warm and chatty, and insightful.  She stood in front of a blue, well-lit wall and I could distinctly make out her aura, as well as that of the lady sat in front of me.  The effect was enhanced by Jean's eyes, which seemed to merge with the colours of the background to create an eerie glow.  She noted during the evening that you could tell a medium just be looking into their eyes.  I could see what she meant...

In fact, Jean was full of useful thought about mediumship and the world of spirit.  She is a person who is logical and analytical, and uses those skills to examine what's going on with the interaction between us and the spirit-world.   This made for an interesting talk, and I learned a fair amount from her.

As one might expect, Jean gave several people in the audience readings, citing the presence of one or more of their departed relatives.  The results were generally positive, but there were not enough quirky details in the readings for my liking.  Jean's anecdotes during her various discussions contained more instances where she had produced either bizarre or remarkably detailed readings; ones not so readily challenged.  I don't think the level of detail provided during this particular evening would have satisfied a sceptical member of the audience, but that's certainly not to say that Jean doesn't have the gift.  After all, she did come up with stuff that got the audience audience members concerned nodding and agreeing wholeheartedly.

She said at one point that spirits coming forward when she presented to a theatre-sized audience generally often provided names and other details.  In this bookshop no names were forthcoming, and this was a shame.  I'm not sure why spirits would choose to differentiate between venue sizes when considering the necessity to identify themselves more formally.  Surely, under any circumstances, they would say, 'Hey, it's Uncle Peter here!' rather than leave that identification to chance.

Martin, who also came along, said that there was a lot of activity in the room that evening.  He could make out shadowy forms moving around Jean when she was giving her readings, and saw many orbs.  There was also a lot of movement on the staircase behind her (which was an escalator which had been turned off).  Jean seemed actively involved with the world of spirit, and she says that she has seen and spoken with spirits all her life.  Remarkable, to be sure, and her teaching background makes her a fantastic resource for those wishing to learn more about the world of spirit.