Avebury is a quite remarkable megalithic monument set in the Wiltshire countryside.  The village of Avebury contains ancient stones, some of which enclose it in a great circle.  Greg Jenner, from Abbotsford, Canada has written to me wondering whether the two interior stone circles, the North Circle containing 'The Cove' and the South Circle, are indicative of a binary solution to our solar system.  Greg writes:

"In Oct. 1994 I visited the mysterious site of Avebury and I got a strange feeling when walking around within the ‘standing stones’ that this ancient site is somehow a representation of what was being observed in the skies at the time. I put the feeling in my memory banks and then a few years later I got my hands on a book called: ‘Mysterious Britain’ by Janet & Colin Bord; Paladin Books © 1976 (1). (see attached image with color highlights) I turned to page 22 and it hit me like a ton of bricks.

If you read the paragraph the Authors say that this is possibly how Avebury looked some 5,000 years ago when it was first erected as a Sun Temple. Wait a minute, I thought, if this was a sun temple then why are there TWO CIRCLES. The stone pattern is exactly the same as each other so I know the Moon is not represented here. I think the ancients of Avebury ‘documented’ the passage of Nibiru by showing two Suns!"

In connection with this thought, I note that the first settlers in the Avebury area, specifically at Windmill Hill, are traced to 3700BC (2), which is approximately the time of the Anu's return to Earth, highlighted as 3760BC by Zecharia Sitchin (3). I have argued that this is tied in with the return of Nibiru to the same period (4).  So it is conceivable that the people who settled in the Avebury area and began to plan the stone circles there had witnessed a most remarkable celestial phenomenon; the return of the Dark Star, the Sun's binary companion.  One can imagine how such an event would have captured their collective imagination and driven them to plan the great circles that arose over the next few centuries.

Greg additionally wonders whether there are two rogue entities awaiting discovery in the Solar System: a binary brown dwarf at some distance, and a smaller Planet X whose reappearance has been deliberated upon in more recent years.  Greg cites the entry in an encyclopaedia published in 1987 showing just such a scenario potentially awaiting discovery, and how these proposed bodies might be  gravitationally interacting with the Pioneer probes (5).

This has been discussed in my book also (6), although it should be pointed out that the actual observed anomalous gravitational effects experienced by the Pioneer craft are directed towards the Sun.

In any case, it is of interest to note that a third circle with an additional serpentine trail attached is to be found adjacent to Avebury, and Greg wonders whether this might indicate a Planet X-type object.  The serpentine configuration is also close to the positioning of so-called 'ley lines' at Avebury.

It may come as a shock to some readers that the megalithic stones of the most famous sites in England have, on occasion, been subject to movement.  Those at Stonehenge, for instance, have been excavated in the past and the placed back carefully, on several occasions in the 20th Century (7).  I was witness to such an event in Avebury in 2003, when I came to find people were carefully lifting a stone in Avebury's 'Cove' (I live about an hour's drive from the ancient site):

One naturally wonders how mush reliance can be attached to highly accurate and detailed surveys of these megalithic stone circles as they currently stand.  From the point of view of detailed archeo-astronomy they must be questionable these days.  But the point made by Greg Jenner is of a different order, one attached to the meaning of the circles themselves irrespective of their specific alignments.  If Avebury is an ancient Solar temple, then why are there two foci within the great circle?  Did this indeed relate to lost knowledge held by the peoples who began to populate Wiltshire around 3700BC?

Greg also provided me with a further image, this time from Babylonian culture that seem to show a similar binary connotation (8).  There is a clear trinity of celestial objects on this stella, towards the top; the Sun, the Moon and a third, radiant planet.  Note the presence of the Babylonian deity Marduk further down the stella, a deity closely associated with Nibiru.  It is  interesting to compare this image with a later alchemical dragon, Azoth, with his two suns and a moon, shown left.  The parallels are even closer when you bear in mind the presence of the dragon, or serpent itself:

In both cases, the serpent seems to me to be the Cosmic Dragon, equivalent to the serpent deity Kematef in Egyptian mythology, the deity Chnoubis among early Hermeticists, and certainly with the Mithraic 'kosmokrator', or 'keeper of cosmic time' (9).  A third example of ancient trinity symbolism involving an anomalous, but all-powerful central deity, is that of the Ugaritic Bal of Canaan (10), here shown between the Sun and Moon, with its own 'Winged Disc' symbolism.

So, does the symbolism deployed at Avebury fit in with this complex admixture of ancient myth from various Middle Eastern cultures (12)? Which then begs the question; is there a link between ancient Mesopotamian culture and the megalithic stone circles of southern England?  And does that link, if proven, bring us any closer to resolving the nature of Nibiru?  Some have speculated that Sumerian feet once walked upon England's mountains green (11), but the evidence is scant to say the least.  It seems more likely that diverse cultures were impressed upon by an observed phenomenon common to all; a celestial appearance of a maverick object around 3750BC, perhaps. 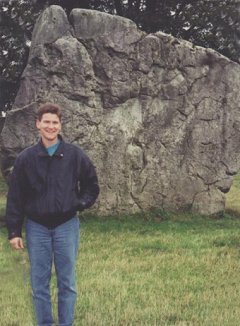 Readers might be interested in a similar binary stone circle, this time in Peru, which has common elements with Avebury: