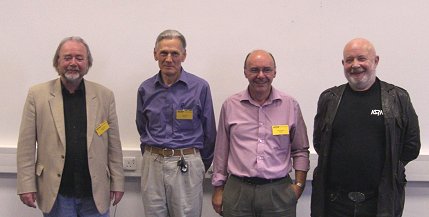 The conference was organised to celebrate the 25th and 20th anniversaries of two paranormal investigation organisations, ASSAP and Parasearch.  Which is quite an achievement in these Fortean-phobic times.  There must have been about 70 delegates present, I would guess, and they all seemed to enjoy an excellent set of lectures, which I will briefly sum up as follows:

John Spencer is a well-respected UFO/paranormal researcher and author who flicks between right-brain and left-brain work seemingly at will.  He is clearly an accomplished individual with a lot of interesting things to say.  On this occasion he discussed the subject of poltergeists; what they might be, the various effects they had, how to get rid of them (or not...), and plenty of advice on how to investigate them successfully.  We learned about how poltergeists can respond to events, and discussions, in their favoured locations, how they can follow researchers home, and how they can scupper plans to record their activities on equipment.

Tricky beasts to be sure, although John is somewhat of the mind that they are of the, well, mind.  In the sense that they are an extension of the human psyche; creating physical effects in the environment in response to stressors felt by the individual often at the centre of the events.  Sometimes that person might be an adolescent (tangled in the accustomed quagmire of teenage angst), and sometimes not.  But one thing was for sure: poltergeists are real enough, as John's often personal testimony attested to.  A great talk from a great researcher!

Rev Lionel Fanthorpe is a Fortean researcher and broadcaster well-known for his amiable banter. He is the President of ASSAP, and acted as Master of Ceremonies throughout, introducing and thanking each of the other speakers with impeccable manners and insightful comment.  His is an endearing personality, and his television series a few years ago was just brilliant entertainment.  It also turns out, by some strange coincidence, that his son lives down my road...How weird?  Well, not quite as weird as the many tales Lionel presented us with, on the subject of the Mysteries of Time.  We were treated to some very odd stories, of disappearing folk who reappeared with strange tales to tell. Dislocations in time.  It was clear that Lionel had some pet theories to explain the bizarre nature of 'reality' which could account for these paranormal events, but he kept things simple, and resisted the temptation to turn into Stephen Hawkins for the morning.

My favourite story was of the old boy who visited a public toilet in Norwich, and could not be found 15 minutes later when his anxious wife asked a passing traffic warden to see what had happened to him.  He then walked out of the previously vacant toilet with tales of seeing a street full of silent vehicles beyond description.  Time travel into the future?  An intriguing possibility.

Lionel Beer is Director of BUFORA, a national UFO organisation loosely centred in the nation's capital.  It's still going, just about.  The subject of Lionel's talk was Camelot, and its alleged location.  Or locations, as it turned out, because it's presence seems to be claimed by almost every shire in the land.  We were taken through a chronological 'history' of the Legendary King Arthur, and how this figure in the mists of time might have more Celtic blood than what we think of as English.  We encountered some great historical figures along the way, like Henry VIII's older regal brother Arthur, who he succeeded, and whose wife, Catherine of Aragorn, Henry consequently married.  Also, which is news to me, was a conspiracy theory about how the murdered King Edward II may have been whisked out of England to France, and his most unpleasant death at the hand of torturers in Berkeley Castle faked. So then, who really is buried in Gloucester Cathedral?

As Lionel's talk continued it became clear that the real location of Camelot, if indeed there even is a 'real' location, was still very much up for grabs.  Wales, Scotland, the West Country, Colchester, Winchester, even North London were discussed.  But the groundswell seemed to swing back to Cadbury Hill near Glastonbury.  Paul Devereux later recounted the discovery of a Bronze Age boat burial at this location, with a skeleton discovered who has been pointing towards Glastonbury Tor for millennia.  Avalon lives on folks...

Paul Devereux is, of course, a well-respected author and really very serious researcher into all things paranormal.  His work on 'Earthlights' is well known.  The initial part of his talk took the academic community to task for its blanket ban on the discussion of serious research into paranormal phenomena, despite the fact that such research still occurs in the Ivory Towers themselves.  Which is quite remarkable in itself, considering we seem to be living in a media and corporate-inspired new puritanical age of academic witch-hunting.

Paul's thesis was that our collective efforts to understand the paranormal are critically undermined not just by our industrialised culture's pre-disposition to materialism, but by the Western paradigm itself.  His current research efforts are orientated around the journals and papers written by various anthropologists and other educated observers who have lived among indigenous tribes in remote locations.  Paul has discovered in these accounts often sober descriptions of the paranormal, many of which he recounted to us in some detail.  Some of these events were drug-induced, when the anthropologists in question joined in tribal rituals and imbibed hallucinatory sacraments.  Others were more objectively based, with all of the bizarre events seen carefully observed and recorded.  Such events, and their observation by qualified academics, are important, argued Paul, because they represent a shift of paradigm in their understanding.  If we are to grapple with the subject, and not to continue to stand still as we have over the last few decades, then we must seek out accounts of these 'trans-personal' experiences.  We must come to see psychic ability as a shared experience, and that shamanic practitioners are capable of moving through these layers of reality at will.

This otherwise excellent lecture was slightly spoilt at the very end by Paul's incongruous assertion that ghosts are all merely hallucinations.   I'm sure he meant this in a rather deeper way than it came across, but the effect was rather like building up a roaring fire then immediately extinguishing it with a bucket of water.  Is the spirit world real, or an aspect of the collective unconscious, or perhaps super-conscious?  I wonder...

2012 saw ASSAP's first UFO conference, entitled "Seriously Unidentified".  As an organisation which is scientifically-minded in its approach, and generally on the sceptical side, ASSAP hosted a friendly and fairly informal affair - reminiscent of UFO Magazine's old conferences (indeed, our host ASSAP Chairman Dave Wood seemed a young version of the late Graham Birdsall). 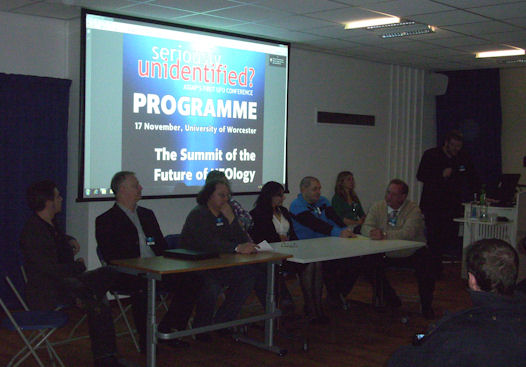 The spectrum of speakers went from Ian "Say No to UFO" Ridpath (who is to the UFO scene what Richard Dawkins is to religion) to the passionate advocate of paranormal experience Sacha Christie.

Various aspects of Ufology were examined, including cultural influences and trends, historical flaps, Hollywood, crop circles, abductions and, of course, the (pseudo-) science of Ufological research.  I was particularly impressed by Trystan Swale whose sidelong and amusing look at the world of Crop Circles revealed much of the true reality of this popular phenomenon, and also young and talented academic Cal Cooper who has a great future ahead of him as a paranormal scientist and commentator. 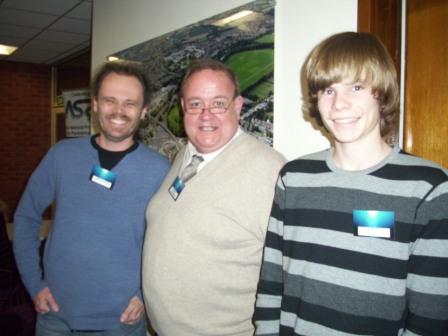 I ran a second-hand book stall - which proved very popular among the delegates - and was accompanied by several of my friends who have attended many similar events before, as well as my oldest son Chris who attended his first ever UFO conference (pictured above, meeting UFO researcher and author Kevin Goodman).

We felt very welcome at the event, which had about 100 delegates.  The subject of UFOs does feel a bit dated these days, and my friend Simon noted in the Q&A session how the median age of the conference was extending into the silver surfer range.

Disappointingly, there was no strong advocate of UFO reality speaking at the conference, and little discussion of some of the aspects of the phenomenon I find most compelling - like the connection between UFOs and nuclear sites, the many cases of military observations combined with radar traces and the disclosure advocates emerging from military and intelligence circles in recent years.

But the sceptical edge to the conference provided food for thought for us advocates of UFO reality.  We certainly find ourselves on the back foot these days.  In many ways, UFO 'believers' (and this is a term itself loaded with so many negative connotations) have only themselves to blame for that.  The sense I got was that many of the delegates, themselves seasoned UFO researchers, were not as sceptical as some of the speakers, and there was some friction in the Q&A sessions at times.  It's good to see that the subject still evokes passionate debate, and I was pleased that my son had the opportunity to consider the pros and cons of a subject that has interested me since I was his age.  If nothing else, it was evident that a wide spectrum of opinion was on offer, with many people who are well read on the subject remaining decidedly agnostic.

Many thanks to the organisers for all their hard work in putting this excellent event together, especially Robert Moore whose commentary throughout the conference was most poignant.