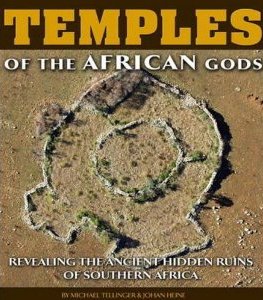 By Michael Tellinger and Johan Heine

Through this beautifully presented book, Tellinger and Heine bring to the world's attention a highly neglected slice of archaeology.  Once one has pored over the myriad photographs, aerial images and satellite photos of these mysterious stone walls, and realised the extent of their coverage across broad swathes of southern Africa, one is left flabbergasted at mainstream archaeology's apparent neglect of these ancient ruins.  Taken individually, each circular monument might be dismissed as a sheep pen (the Khoi people were shepherds 2000 years ago), and each terrace as man's early attempt to manipulate the landscape for horticultural gain.  But these are not isolated structures.  Instead, they are diffused right across the landscape of southern Africa, half-buried and mostly forgotten.

Not only that, but the design of the dry stone walling of the circular enclosures provides us with further questions.  The majority have no entrances, even when a 'road' encased within parallel stone walls runs right up to them.

"There is simply no explanation why a large stone structure with a diameter of 25 to 150 metres, which contains a number of smaller circular stone structures, would be constructed without any entrances.  But it gets even more weird - many of the internal stone circles also have no entrances an simply look like a cluster of grapes inside an outer wall."

That seems to negate the possibility that they are structures initially designed to be lived in (the walling providing a base upon which to construct, say, a wooden framework to make a covered hut). 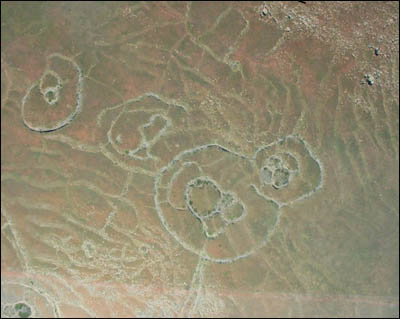 And then there's the problem of population, which the authors argue very well.  According to our standard understanding of history in the region, the landscape in question was sparsely populated by nomadic peoples during the time these walled structures, numbering in the millions, were built.  Where was the workforce to make all these walls - each constructed well enough to have survived the ravages of time?

Among the ruins, the authors - who have clearly researched their subject with extensive privately-funded fieldwork - have discovered many anomalous stones and artifacts which, in  their opinion, set the dates of the monuments far back into antiquity.  There must have been, they argue quite reasonably, a well-resourced civilisation behind the construction of these ancient walls.  The patterns the walling forge across the landscape of South Africa, Zimbabwe, Botswana and southern Mozambique are remarkable, especially seen from the air.  The authors ascribe the denser collections of stone-works to extensive ancient cities, but given the lack of entrances to many of the more circular structures this is far from self-evident.

They ponder many possibilities - some of them highly speculative - about the uses of the ruins and the channels that run between many of them.  We are asked to consider such exotic ideas as free energy, acoustic/sound energy, an industrial-scale gold extraction technique, and even the ability to levitate.  It is clear that gold was mined in South Africa tens of thousands of years ago, and that this might have been, even then, an important source of trade.  It could be reasonably argued that such an industry could have funded the building of such extensive monuments across hundreds of thousands of square kilometres of land.

But such an acceptance of this overturns much of ancient history, and our normal working assumptions about early civilisations.  Perhaps, one might argue, that explains the woeful neglect of these ancient African ruins?  Perhaps the neglect stems from old-style European-centred arrogance that has never quite gone away; that ancient civilisation must have started with the Greeks and Romans, pushed back eventually to the Egyptians and, with some weariness by euro-centric academia, to Sumer.  Is it time for that same academia to consider that the cradle of civilisation went back still further in time and distance, to southern Africa?  After all, that's where our human race emerged from in the first place, and modern humans have been roaming about for about 100,000 years - creating a great deal of opportunity for a civilisation extending back well into the last Ice Age.  I think this seems likely, and I think the authors have done South Africa and its surrounding lands a great service in bringing this possibility to the world's attention.

However, I have a different explanation to offer for these structures, not considered in the book.  The reader's attention is drawn to the similarity between the patterns the walls create, as seen from above, and ancient rock petroglyphs also found in southern Africa. The aerial photos remind me of the Nazca lines in Peru, although the patterns and their mode of construction are very different.  They also remind me of the modern phenomenon of crop circles here in Britain, created by artists intent on creating controversy when the circles are viewed from the air. 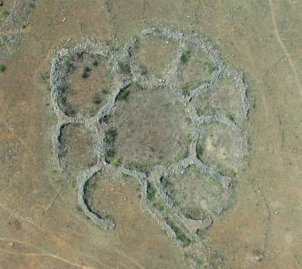 I think the extensive stone-walled patterns were designed to be seen from above.  They served no other practical purpose when they were constructed, although they may have been made use of by later nomadic peoples.  Initially, though, I think they were simply religious in nature, creating a tapestry of artwork to be seen by the gods from the sky *.

Many of the patterns look like flowers, and the walls leading up to them, that so mysteriously stop in dead ends, look like flower stems.  Is it possible that the ancient peoples who made these extensive structures were creating a countrywide depiction of a garden, to be appreciated only from above?  To enter the territory of speculation enjoyed by the authors, might this garden not be that of Eden?  That would tie in with the concept of civilisation emerging in South Africa/Zimbabwe first, centred upon the extraction of gold and, hence, wealth, power and the wielding of extensive human resources.

It beggars belief that there has not been more academic interest in these amazing monuments. They hold the potential for a great leap forward in our understanding of our past.  I think that this remarkable book is an important milestone along that difficult journey.  The incredible images and photos within its pages are worth the purchase alone.

* As Richard Dawkins would argue, religion has a way of sapping huge resources completely unnecessarily.  Powerful religious figures in all societies draw resources to create their temples, often in alarming juxtaposition to the living conditions of the people they actually serve.  And religious people themselves are often happy to provide much of their time and resources to serve their religion, with no seeming benefit to them in return, beyond a tenuous promise of heaven in the afterlife.

Book review by Andy Lloyd, 22nd January 2012, with thanks to Warren.

Images reproduced with permission of author.

Lee Covino has forwarded to me satellite images of very similar stone structures as those described above; this time located over 4000 miles away - in the Syrian Desert.  Archaeologists are only just beginning to look at these Middle Eastern structures (1), showing a lack of interest reminiscent of the scant attention paid to the dry stone wall enclosures of Southern Africa.

"[Professor Edward Banning of the University of Toronto] said that archaeologists have detected, via satellite photos, what appear to be cairns and stone circles in other areas [of the Syrian Desert], including the deserts of Jordan and Israel. However, he admits that most of these things have not received a lot of archaeological investigation." (2)

The similarity between the southern African Syrian desert structures is uncanny.  If the Syrian Desert examples date back to the Neolithic period, which is considered likely by archaeologists, based on the types of stone implements found near them and carbon dating techniques (1), then that might help to date the African examples to the same period.  That is assuming, of course, that the nomadic peoples responsible for them migrated across the entire length of Africa and into the Levant (or in reverse). 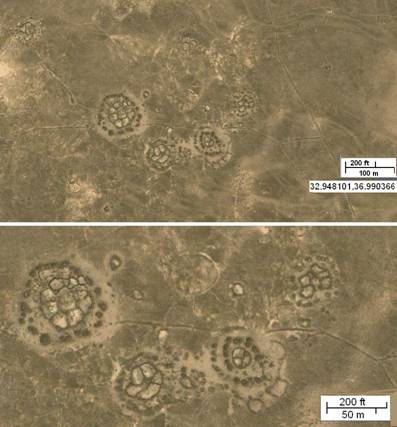 If that's the case, then the link between these two parts of the world is also important from a Sitchinite perspective.

Sitchin's interpretation of ancient Mesopotamian texts indicates that the Anunnaki gods settled two distinct areas: Mesopotamia and Southern Africa.  Is this just a coincidence, or is there more to this potential connection?  I'm still not sure in my mind what the purpose of these structures is.  I don't think Michael Tellinger is right to say that they have something to do with gold extraction and processing, or other exotic ideas.  It's more likely that they served as pens, or dwellings - or both.  Either that or these mysterious structures form a landscape of religiously important petroglyphs designed to be seen from the air by the gods (as I've considered above) - rather like the Nazca lines. 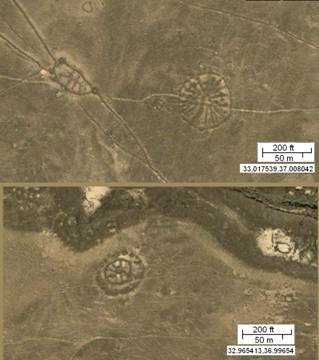 If they were dwellings for humans, then it seems likely that the stone walls were supplemented by wooden fencing/walls and possibly even primitive roof structures long since lost.  But why are there no obvious entrances points?  The bound nature of these structures surely implies a corral-like function.

Following the Sitchinite theme here for a moment, it should be pointed out that humans are thought to be genetically modified primates put to good use as slaves by their Anunnaki masters.  So perhaps if these are indeed human dwellings, then their bound nature can be explained rather simply - they serve as human pens.  After all, the Anunnaki would need somewhere to lock away the workers when the day's work was done - workers they would have considered as little better than domesticated animals.

I think Tellinger is spot on to point out that the extensive nature of these structures implies the hallmark of a budding civilisation - but it's strange that it's a civilisation without an obvious central place of power.  The network is dispersed over a massive landscape, even more so if the Syrian Desert connection is a reality.  These are not city states with monumental structures designed to project power.

Consider for a moment what life on Earth would have been like for the 600 or so Anunnaki colonists.  They would have arrived in large spaceships and would have brought with them artificial dwellings to establish the first colonies. We can certainly relate to this way of thinking from our modern perspective.  They would not have built cities or monuments of stone, at least not to serve their own needs.  It was not until Enki produced his slave race, which rapidly expanded in numbers, that the need for large-scale containment would have become apparent.

The colonising Anunnaki may have lived in deployable artificial buildings that they moved around as needed (hence the lack of hard physical evidence for their own habitats).  But these kinds of mobile habitats - so familiar to our modern sensibilities - would not have been appropriate for the human slave workers created by Enki.  Perhaps that's why these enclosures sprang up in these two distinct, but centrally important parts of the globe.  After time, as humans began to organise and establish themselves independently, cities developed around Anunnaki centres of power (interestingly, it's been pointed out by a reliable source that these Syrian stone structures are located in or very near Argob, the legendary land of the Nephilim (3)).  But perhaps these structures were the first efforts to organise and contain the human workers near the fields and mines where they worked.

1) Amelia Carolina Sparavigna, "Stone structures in the Syrian Desert" 14th July 2011 with thanks to Lee Covino

3) Correspondence between our source and Lee Covino, 1st July 2012