I was already quite certain of the whereabouts of the Dark Star, a sub-brown dwarf orbiting the Sun.  That certainty has been helped by the revelation that a remarkable astronomical observatory is being built in Antarctica.  This most inhospitable of places is the perfect viewing ground to seek out infra-red objects in the Southern constellations.  And it appears that this new South Pole Telescope will be capable of doing just that, whilst enjoying the prospect of complete isolation and security.

In my book 'Dark Star' (p77, 2005) I exposed the furore amongst the IRAS project scientists regarding an anomalous object in Sagittarius.  Fact: A planet bigger than Jupiter was been spotted by the IRAS space telescope in 1983!  It had a temperature of 240 Kelvin, and sat in the constellation of Sagittarius.

Big news, one would think.  But for some reason the American team working on the project refused point blank to investigate the 'anomaly'.  This caused anger here in Britain, and the project's British partners went to the unusual step of going public with their fury at the shelving of the investigation.  This was reported in 'New Scientist' at the time, details of which appear in my 2005 book 'Dark Star: The Planet X Evidence".  Sagittarius is, of course, one of the Zodiac constellations.  It is a summer constellation, being opposite the Sun during June.  This makes it a difficult constellation to view from northern latitudes, including North America and Europe.  This is because during the summer months Sagittarius lies low on the horizon, and the nights are short and not particularly dark.  Examining the area around Sagittarius is made even more difficult because the Milky Way crosses this part of the sky.  The whole area is covered in stars, creating a proverbial stellar haystack.

Marshall Masters and his Yowusa team report that progress in constructing the South Pole Telescope is gathering pace.  Has this bizarrely located observatory been planned specifically to watch the Southern skies for signs of Planet X?  It's certainly possible, and my own preferred location for the Dark Star does require a southern hemisphere position to allow study all year round.  Not only that, but working in the Antarctic is about as isolated a location you could imagine, which is great for security when it comes to keeping the research projects in question under wraps.

On his webiste, Marshall asks: "Why is America spending a massive fortune to transport this massive facility with massive C-130 airlift to the most desolate, inhospitable and inaccessible region of the world to track this massive inbound?"

I had the pleasure of appearing with Marshall on the Rob McConnell radio show on 3rd-4th May 2006 to discuss this very issue.

In order to study the sky for warm objects it makes a whole bunch of sense to locate a telescope in an extremely cold environment.  After all, if you want to look at the stars, you wouldn't go out with a telescope in the daylight.  There's too much visible light in the atmosphere.  Likewise, looking at the sky in the infra-red spectrum can be difficult because of the background heat in the atmosphere.  But in Antarctica you have a 6-month winter as frigid as anywhere on the globe.  You have access to the constellations which are more difficult from the Northern latitudes, like Sagittarius.  It's ideal. 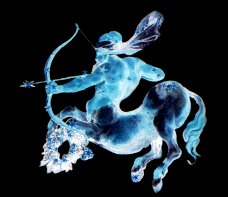 The problem with Antarctica is that it is so inhospitable that very few scientists brave conditions there during the winter.  Indeed, it is so cold and desolate a place during the long winter that astronauts training to go to Mars will stay there, to sample just how bad it can get on the Red Planet's 'warm' equator.  So, it seems unlikely to me that the university academics will be down there using this telescope during the winter.  Instead, their sole input will be during the 2 months each year that Antarctica enjoys something approaching a summer, around Christmas time when Sagittarius is obscured completely by the Sun.  Their experiments will take place then, looking at background microwave radiation in the heavens.  They will have no regard for Sagittarius at all...

But, for the rest of the year the U.S. Government-sponsored observatory will lie dormant...during the Antarctic winter when Sagittarius can be studied and scrutinised in the infra-red and visible spectrums.

Which begs the question,  is their official work simply a cover for the real purpose intended for the S.P.T.?  That is, to study the Sun's binary companion, the "Dark Star".