It has been claimed that Freemasonry evolved from Rosicrucianism in early 18th Century England.  Although there are links to suggest that the Rosicrucians used the lower Masonic degrees as initiatory levels into their own ‘higher class’, the two institutions appear to offer different bodies of knowledge.

The Rosicrucian movement was derived from an allegorical book written by Johann Valentin Andrea, a German pastor who was born in 1586.  A benevolent philanthropist, he appears to have been creating the blue-print for the Rosicrucian Brotherhood, an order that was later actually established by alchemists and Hermeticists (1).   In keeping with the Masonic ‘seven sciences’ it should be noted that the seventh and highest science of the Rosicrucians was astronomy. 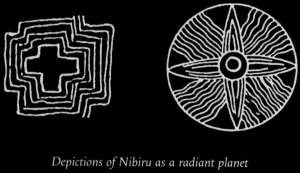 The symbols of the Rose and the Cross are themselves deeply suggestive of Nibiru which was often depicted form of a cross by the ancients, as Zecharia Sitchin describes:

“The pictographic sign for the Twelfth Planet, the “Planet of the Crossing”, was a cross.  This cuneiform sign, which also meant “Anu” and “divine”, evolved in the Semitic languages to the letter tav, which meant “the sign”.  (2)

This vital observation is often lost during arguments about the nature and timing of this mythical planet and its orbit.  The earliest symbol of Nibiru was a cross, and this seems inextricably linked to its later Messianic symbolism during the Graeco-Roman era. 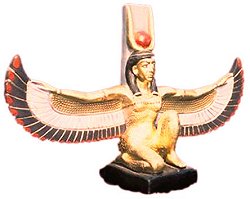 Nibiru's red countenance perfectly fits with the 'Rosy Cross' symbol used by Freemasons and Rosicrucians, and is connected with esoteric concepts such as the 'Blazing Star', the 'Dark Satellite' (3), the "Night" of Isian Rites ("who weaves her web with rapid light though it be less than Sun’s” (4)) and the 'Eighth Sphere' of the Theosophists (5).  It also finds a parallel home with the red disc of Horus contained within the ancient Egyptian Winged Disc, here shown associated with Isis.

The most famous work of the Rosicrucians is the ‘Chemical Wedding’ by Christian Rosencreutz, a fabled romance full of allegory and arcane symbolism (6). The work is deeply symbolic, and designed to challenge the most knowledgeable adept of alchemy and Christian mysticism.  The Phoenix, another potential Nibiruan symbol, makes an appearance in ‘The Chemical Wedding’, as well as a great deal of celestial symbolism pertaining to alchemy and the Hermetic Arts. 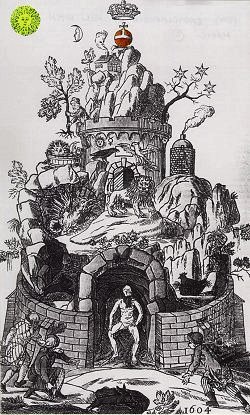 There are certain aspects of Rosicrucian lore that correspond closely with the ancient knowledge of Nibiru.  The fictional hero, Christian Rosencreutz, takes the archetypal form of the ‘dying and rising godman’ in the ‘Fama Fraternitatis’ (7).  After creating the order of the Rosicrucian Brotherhood, Rosencreutz dies at the age of 100 (sometimes claimed as 106 years) in 1484, and his body is lost.  His 8 closest followers seek his tomb, which remains lost for 120 years.  The ‘tomb’ is found to be a seven-sided vault lit by an ‘artificial sun in the centre of the arched roof’ (8).   This is most important: it leads us to the discovery of a hidden source of light in the darkness, a self-luminous companion to the Sun that is associated with the number 7 and has Messianic overtones.

In this highlighted diagram of Rosencreutz's tomb , sent to me by Greg Jenner, the trinity of celestial symbols is plain to see:  The Sun, Moon and Sceptre.  The Sceptre is associated with both the symbol of the Cross and that of the Crown above it.  The majesty of this third body in unequivocal. It is Nibiru, the returning Lord of the heavens, and it takes centre-stage in the iconography of Rosicrucian lore.  The mountain of symbols below is simply an extension of this sacred Sceptre.  Adepts can find precious clues about the nature of Nibiru here.

A striking parallel can also be made with the ancient Mysteries, the knowledge of which required initiation.  Max Heindel, a writer belonging to the Rosicrucian Fellowship in Oceanside , California,  describes the spiritual connotations of the 'Blazing Star' for Initiates: 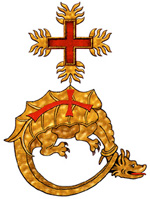 The symbol of the Rosy Cross is connected with alchemy in the minds of many scholars.  The ecclesiastical historian Mosheim has this interesting point to make:

“The cross, in the chemical style, is equivalent to light, because the figure of the cross exhibits at the same time the three letters of which the word lux, i.e., light, is compounded.  Now, lux is called by this sect [Rosicrucianism] the seed or menstruum of the red dragon.”  (10)

This strikes me as a rather compelling connection between a celestial image, alchemy and the Rosy Cross.

The Rosicrucians linked the light of the Cross with the ‘menstruum of the red dragon’, a rather bizarre image in terms of known astronomy or astrology.  The Dark Star Nibiru fits in the image well, connecting the light of the Cross with the celestial red dragon, and hinting at similar imagery within Alchemy.  The Christian symbolism regarding the Rose is well known, Christ having been ‘prophetically called the “rose of Sharon”’ in the Bible (8).  Again, a direct link can be made with the Messianic Star, pinpointing Nibiru's last return to a period some 2000 years ago.

The History of Magic

The Real History Of The Rosicrucians

The History Of Freemasonry Vol. I

10)  Johann  Mosheim “An Ecclesiastical History: Ancient And Modern, Form The Birth Of Christ, To The Beginning Of The Present Century”  Maclane’s Translation, cent. Xvii., sec. I., vol. Iii, p. 436, note