You will have no doubt seen videos on YouTube purporting to show Nibiru. You have likely been treated to dodgy-looking images of red stars which looked like they have been knocked up on PhotoShop.  The path to discovery is strewn with fakery and falsehoods.  It irritates me, although the prominence given to various bits of nonsense is hardly surprising given the sensationalist nature of various news media, both mainstream and alternative.  My stance on the issue of Nibiru videos and images is to look to their source to determine authenticity and seriousness.  Unless their source can be directly determined and verified then they must be treated with great caution.

One may counter this stance by arguing that perhaps videos and images purporting to show Nibiru plunging towards us are released by whistleblowers, and therefore cannot be directly verified.  That is too convenient a smokescreen.  All it would take is for the exact coordinates of the location of the alleged object to be released, and then images sought from the academic community to either verify or debunk the claim.

Naturally, gaining such material from the academic community, which is generally highly sceptical about claims for a Planet X, is not an easy business.  There are extensive catalogues of images available to academics through university library systems which are simply not available to the general public.  Without access, and without the knowledge of how to sort through the catalogues for what you want, then independent verification is not always possible.  I, for one, am unable to bring such data forward at the touch of a button.

I can authenticate the source of the image, because the researcher is an astronomer friend of mine, who has personally provided the image from his university database.  The image is from IRAS, the infra-red sky search from back in the mid-eighties which scanned 95% of the sky.  Remember, you're looking at heat sources here, rather than what you might actually see visually through a very powerful telescope: 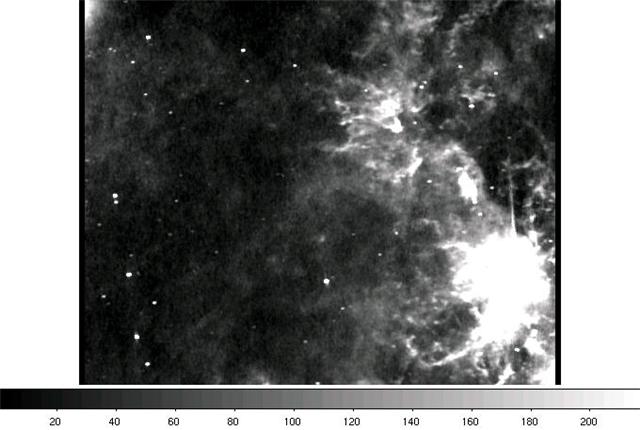 It's fascinating, isn't it?  My first instinct was that these are hot objects embedded in a nebula.  But might they be a Dark Star system located deep within the outer solar system, enveloped in a gaseous halo?

This image is for real.  What I cannot verify for you is who supplied the original set of coordinates.  My academic friend indicates that the coordinates were provided to him by another researcher who claims that Nibiru passed through this point. Intriguingly, that researcher also claims that he is in contact with Vatican astronomers.  As you can see, this trail quickly becomes murky, so how these coordinates emerged is not something I can stand by.  But the image is authenticate enough, which makes a change, right?

The constellation is Orion.  The stellar coordinates are 5h49' and -04h02' (the exact seconds are on hold for now), which looks to me like a point midway between the bright stars Alnitak and Saiph.  This location is not far from the Great Nebula in Orion (M42/M43), which may explain its gaseous cloud-like qualities.

My astronomer friend described additional work he did to further his understanding of what we might be seeing here:

"I [carried out] synthetic aperture photometry, but I found more than 20 stars with a instrumental magnitude near 16m, so many could be a planet or an asteroid."

He further points out that this technique usually comes up with a magnitude result that is several times too high. So the instrumental magnitude of 16 is probably equivalent to a real magnitude of 18 or greater, which is very low, and could indicate background stars, or faint, distant solar system objects as suggested.  My friend has indicated that if one or more of these objects are planet-sized, then they are well beyond Pluto and that a minimum perihelion passage would be at least 15 years away.  But that's an 'if'.  More research is required, which my friend plans to carry out in the fullness of time.

The above table of unidentified IRAS objects is in my research archive (1).  It doesn't contain a matching object to the coordinates supplied. So I would guess that the coordinates supplied to my astronomer friend were not simply lifted from data of unknowns from IRAS research.  Which makes this information particularly intriguing.

Planet X researcher Barry Waemkessel considers it likely that the last object on the table is a half-Jupiter mass Dark Star which he names 'Vulcan'.

I can't say with any degree of certainty whether this image is of Nibiru/Planet X/Dark Star.  I can only verify that the image is an authentic image from an academic source.  If more information comes my way, I'll publish it on this website.  I'm also interested in any information which may corroborate or eliminate this as a Dark Star candidate.