This unusual piece of vandalism is in Garway Church, the original image of which appears in "The Holy Blood and the Holy Grail" book, which of course was the precursor of the Da Vinci Code. 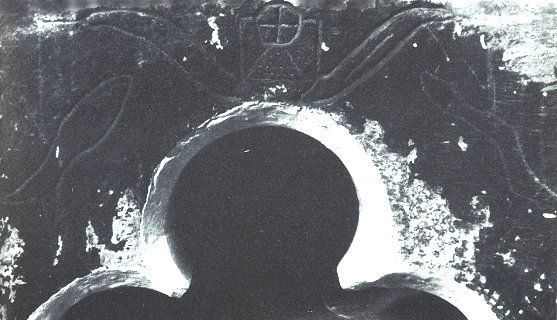 It appears in the last section of plates with the following description:

"32. Graffiti on the head of the piscina in the south chapel of Garway church, showing a winged pyramid and solar emblem, a fish and a snake."

This imagery caught my eye because it not only contains very unusual Winged Disc symbolism (actually and Nibiruan cross atop a pyramid), but puts it in a celestial context in the form of a fish and a snake.  Are these constellations?  Do their relative positions tell us something about the orbit of Nibiru?

I am indebted to Damon Elkins for getting hold of this image for me.  He has a similar interest in the orbit of Nibiru, and passed on these thoughts about the Garway Graffiti:

1. The shape of the "piscina" is that "club" within the "sign of the rose" in "The DaVinci Code".
2. The "horns" above the "head of the piscina" are much like the "belly of Hydra" across which my path of Nibiru crosses.
3. The "horns" appear more like a serpent than like horns.
4. The "lines" left of the fish resemble Pisces (the constellation), and my proposed path of Nibiru passes just "under Pisces and across the pentagonal figure at the long end away from the check mark.
5. The "winged pyramid" appears to me to be multiple pyramids.
6. The circle with crossed lines is much like the symbols for "the planet of the crossing".

There is self-evident Christian symbolism being deployed here.  But how unusual to apply the cross into the context of the Winged Disc!  Especially whilst including a pyramid. 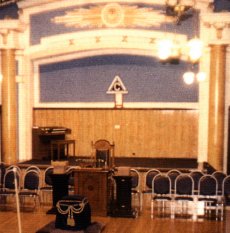 This makes me wonder whether the symbolism is Masonic, or something of that ilk.  Winged Discs appear in some Masonic Temples after all, in the guise of their Blazing Star:

The Throne of Zeus

This imposing throne of Zeus, the supreme Greek god on Olympus, shows a radiance of red fire.  There is celestial, astronomical imagery here, clearly shown by the appearance of a bright star above the throne.  Zeus is said to court the many women he pursued by taking various forms, including the bull. 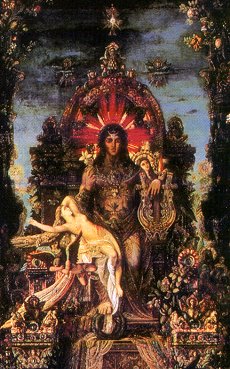 Detail from 'Jupiter and Semele', by Gustave Moreau, 1896

This implies that the celestial object he represents made a passage through various constellations associated with him, including Taurus.

"Semele, encouraged by Hera, persuaded Zeus to show himself in all his splendour.  When he appeared before her as the radiant god of thunder and lightning, Semele was consumed by the flames and, dying, gave birth prematurely to Dionysus, whom Zeus saved from the fire.  In this powerful Symbolist version of the myth, the great god radiates fiery, blood-red lightning.  A winged child hiding from the light could be Dionysus, while the dark, horned god seems to be a fusion of Hades and Pan".

The Ultimate Encyclopedia of Mythology " Anness 2003) 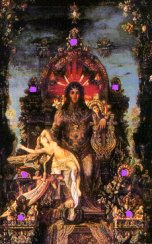 The fiery, red lightning is very similar to the description of Marduk during the Celestial Battle of the Mesopotamian creation myth, the Enuma Elish.  I think both are examples of Dark Star symbolism and describe the appearance of the binary brown dwarf amongst the known planets.  That, in this case, Zeus appears in different parts of the sky and courts various women (stars?) is very much in keeping with the erratic perihelion passages of this object.

The throne captures much of the symbolism of the Dark Star; its red aura, the darkness around it, and also seven significant points marks by various objects attached to the throne (shown right).  These indicate to me the arrangement of objects travelling with the Dark Star. They are the moons of the Dark Star, both greater and lesser, encompassing the planetary system of the brown dwarf.

The myth of Semele being destroyed and giving birth to Dionysus is similar to the Celestial Between Marduk and Tiamat, where the latter is broken apart by the power of the usurper god, forming the Earth.

The Phoenix in the Alchemical Trinity 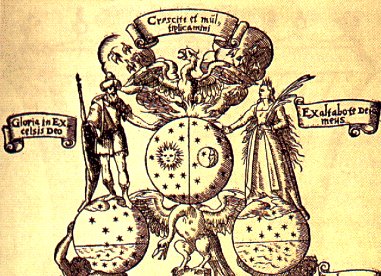 "The third Work [of the Opus Magnum], beginning with the royal wedding, brings the birth of the phoenix: the solar tincture of the red elixir".

The ancient calendar on the bronze mirror.

The first sun is  included in the second sun.

They represent the stages of the creation of the Universe.

While researching information on Zoroaster, Glenda Michelle Gable ran across the web site "THE SLAVONIC ANTIQUITY"  by Sergei V. Rjabchikov on the public.kubsu.ru website (NB The relevant webpages are no longer available online).

The Number 5 caught my attention I guess because of the ancient HOPI, MAYA, (and I think) EGYPTIAN legend of presently being in the 5th sun with the arrival of the 6th sun close at hand:

"The sign of the mirror corresponding to October - December is the head of a horse. A Scythian silver amphora (Galanina, Domansky and Smirnova 1981: 43, photo) is decorated with the sign of a winged horse. 11 petals (months) is depicted above its head. Hence a horse symbolizes a certain month of the Scythian (Sarmatian) calendar. Interestingly, in conformity with the data of the excavations of the Indo-Aryan burials (Shilov 1995: 205), the skulls of horses indicate the sunsetting in winter. It is known that the Indo-Aryan god Agni 'Fire' became like a horse and a man (Shilov 1995: 203). Russian loshad' 'horse' is comparable with Old Church Slavonic l'shchati 'to shine' (Rjabchikov 1998a: 8).

"The horse Dadhikra of the Indo-Aryan mythology played a role of the sun swimming through the ocean of the other world (Shilov 1995: 202). This horse was closely connected with the deity Agni (Toporov 1991a). The wise man Dadhyanc who was closely connected with this horse received the enclosures for cows (Toporov 1991b). An Indo-Aryan symbol, number 5, is associated with the horses in several burials (Shilov 1995: 202). On the other hand, the Scythian tip of the sheath of a sword (Galanina, Domansky and Smirnova 1981: 104, photo) is covered with 5 signs of the sun (fire). Conceivably mech-samorub 'the sword which hews itself' mentioned in Russian fairy-tales conforms to the Scythian sacral sword."