Recently, filming has taken place in Gloucester Cathedral for the Harry Potter sequel “

Harry Potter and the Chamber of Secrets ”.  As the Dean of Gloucester excitedly notes: “Watch out for the sloshing of water caused by Moaning Myrtle who lives in the water pipes of the Girl's washroom. See the graffiti on the walls - it all happens here at Gloucester Cathedral”. (1)  It won't be long now, Potter fans!  The opportunity for the Harry Potter movies to be filmed in Gloucester arose after Canterbury Cathedral refused, on the grounds that it would not be fitting for (arguably) a children’s film about magic to be shot there.  Canterbury’s loss was Gloucester’s gain.  Inevitably, there were some 'noisy negativist' elements here in Gloucester, too, but sensibly the Cathedral authorities saw the light. 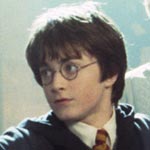 The title of the first film alluded to something more than just magic.  As many Potter fans will know, the ‘Philosopher’s Stone’ was the ultimate goal of alchemy.  The alchemist who finally managed to create this precious and mysterious substance would gain the ability to transmute base metal into gold, or so they believed.  The character Harry Potter may not have actually set up a magical laboratory in the City’s Cathedral, but it has been touched by alchemical magic in a different way as a result of the movie.  Tourism has since been boosted to this city on the edge of the Cotswolds.

Over 500 years ago, one of the monks of the then Gloucester Abbey took alchemy a lot more seriously than we do today.  It was not unusual to believe that lead could be turned into gold back in the fifteenth century.  After all, only a century before the Parisian scribe Nicolas Flamel had gained wide fame for his alchemical achievements.  J.K. Rowling mentions Monsieur Flamel in her first Harry Potter book (2), but he was also a celebrated character in real life.  Although he and his wife Perennelle ran a simple shop in Paris where he copied manuscripts and books, Flamel left an enormous legacy after his death.  The funds bequeathed in his will were sufficient to ‘fund fourteen hospitals, build three chapels and endow seven churches’.

No one knew where the Flamels’ wealth had appeared from and, because Nicolas was known to have been interested in alchemy, the story soon spread that he had discovered the secret of the alchemists among the old manuscripts he had copied in his shop.  This remarkable benefactor was honoured by having a street named after him in Paris, and the source of his wealth remains a mystery to this day.

Gloucester in the 18th Century

"Built from golden Painswick stone, quarried from the nearby Cotswolds, Gloucester (pronounced "glosster") Cathedral is famed for its cloister, where prayer and work went hand-in-hand for the Benedictine monks there. Much filming for "

Harry Potter and the Philosopher’s Stone" was done in the Gloucester cloister, considered to be the most perfect in Northern Europe and acclaimed worldwide for its richly detailed fan vaulting.

"The doorway in the southwest corner of the cloister was rebuilt with plaster of Paris to make it smaller to serve as the entrance to Gryffindor Hall, where the portrait of the fat lady hung.  It was here that Gryffindor residents had to say the password, "Caput Draconis," to gain entrance to their tower dormitory.

"The doorway in the southwest corner of the cloister was rebuilt with plaster of Paris to make it smaller to serve as the entrance to Gryffindor Hall, where the portrait of the fat lady hung. It was here that Gryffindor residents had to say the password, "Caput Draconis," to gain entrance to their tower dormitory.

"The stained-glass windows in the cloisters were darkened for some scenes, and the south cloister passage was used as a hallway in the movie. The Chapter House reportedly served as a dormitory room." (3,4)


Thomas Daulton: The Alchemist of Gloucester

Across the English Channel, a century or so later, the life of a simple Benedictine monk in Gloucester was about to be turned upside-down.  In his book “The Philosopher’s Stone” (5) author Peter Marshall describes the story of Thomas Daulton, who possessed the fabled ‘Red Medicine’.  If the old story is to be believed, the precious substance sought out by

Harry Potter in J.K. Rowling's brilliant books, must once actually have been kept in Gloucester Abbey.

Daulton could not keep this secret to himself, however, and before long he was summoned before King Edward IV.  This audience before the English monarch must have been reminiscent of the miller appearing before the King in the children’s story Rumpelstiltskin!  The foolish Gloucester monk claimed that his elixir was sufficient in quantity to ‘maintain 20,000 Crusaders in the Holy Land’.  But because he had become worried about possessing such a powerful substance he had disposed of it by throwing into a muddy lake near the River Severn.

King Edward cannot have been too amused by this and pressed Daulton further about how he had obtained the Stone.  The monk claimed that far from having created the elixir himself by alchemical means, it had been given to him by the Canon of Lichfield.  A likely story!

Daulton soon found himself back in Gloucester, but this time incarcerated in Gloucester Castle, which is now Gloucester Prison.  There he stayed for four years during which time a courtier of the King tried unsuccessfully to discover from him his alchemical secret. 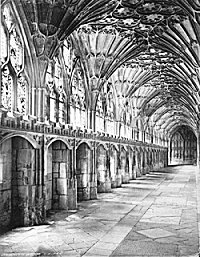 "The gallery of the Great Cloisters of the Gloucester Cathedral, begun in 1360, is another fine example of elaborate vaulting. In fact, it is the earliest known example of fan vaulting." (6)


Intrigued by this account, I contacted public archivists in Gloucester to find out if they had any records pertaining to this fifteenth century monk.  Unfortunately, none remain.  This is partly due to Henry VIII, who ordered all of the Cathedral’s records and documents to be burned during the Reformation in the sixteenth century.  Peter Marshall discovered this story in a 500-year old manuscript in the British Library, so I have no doubt that Thomas Daulton really did live in Gloucester Abbey, but whether he truly found the Philosopher’s Stone is another matter.  Any hope of discovering the source of Daulton’s secrets at the Cathedral is also gone; all documents from that period are now irretrievably lost.

Nevertheless, it is an intriguing thought that the old Abbey may once have played home to a real Alchemist, long before Harry Potter was every dreamed of.  Any riches Thomas Daulton may have created were long since removed by Henry VIII, of course, but it seems that our latter-day fictitious seeker of the Philosophers’ Stone, Harry Potter, may in some way make amends.

Harry Potter and the Philosopher's Stone