Over the last couple of years, the case for a Dark Star in our Solar System has been steadily growing in strength.  Although one has not yet been discovered orbiting our Sun, other similar objects have been found in distant star systems.  These giant planets/small brown dwarfs are re-shaping our understanding of the formation of planetary systems.  They also set remarkable precedents for the Dark Star Theory. 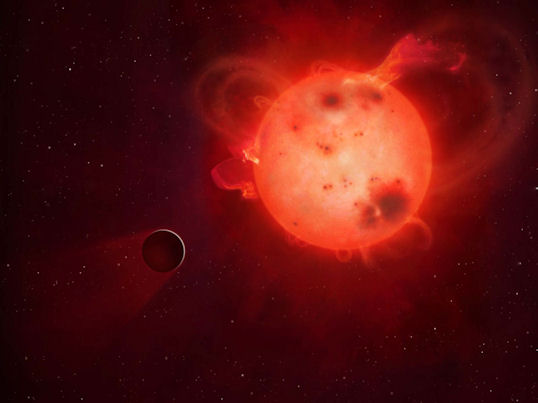 This is because many of the arguments that were once adamantly adhered to when debunking this theory have now been shown to be incorrect.  They were based upon knowledge current at the time, but the new extra-solar planet discoveries have moved things along.  An example of this is the possible distance that a Dark Star might be located at, a theme we shall explore on this page.

Precedent is an important feature of Law.

If a judgement is passed in one case, then the need for consistency leads judges to follow the precedent set in cases which follow.  In astronomy, precedents are being set for the Dark Star Theory.  Massive planets which border on the limits of stellar activity are being found.  Not only that, but the first of these objects to be directly imaged has now been confirmed as a planet, by astronomers working at the European Southern Observatory in Chile (1).

For about a year, they have been monitoring a double light source 200 light years away, in the constellation Hydra.  The faintest of the light sources was believed to be a giant planet orbiting the stronger source, which is known to be a brown dwarf named 2M1207A.  But the astronomers, led by Gael Chauvin, needed to establish that was the case by watching how the two objects moved with respect to each other.  It now appears that the faint light source is indeed orbiting the brown dwarf, and various measurements have secured sufficient data to provide us with an idea about what this new world, 2M1207B, is like.

This relatively young planet is about 5 Jupiter masses, is red, and orbits the parent brown dwarf star at a distance of 55 Astronomical Units.  It has considerable quantities of water in its atmosphere, which "The Independent" speculates may take the form of ice particles in the gas giant's atmosphere (2).  They judge this to be the case because of the extreme distance from the parent brown dwarf. However, I suspect that this body is warmer than that, particularly given its youth and red colour.

The research team at ESO have obtained an artist's impression of the new planet, which is made to look remarkably like Jupiter (3).  I think this image is actually rather confusing because it seems to superficially mix up the two bodies from the original telescopic image.  One should note that the new planet (left) is red, whilst the brown dwarf (right) is the brighter, and larger star!

So I have altered the original artistic image (above) into a new one, which I suspect would give a more accurate picture (below), given the data about the planet's physical properties:

To my mind, this new extra-solar planet, the first to ever be imaged directly, has all the hallmarks of a Dark Star.  It is smaller than a brown dwarf, but has a red tinge and is sufficiently bright to have been detected directly.  This is important, because at the sort of binary distances involved (equivalent to twice the distance between the Sun and Uranus), it should be very faint in reflected light from the parent star.  Especially given that the parent is a dim brown dwarf in the first place.  Yet, it has been imaged directly, implying that it emits its own light.  This is because it is a young planet, and therefore quite active.  The fact that it has water in its atmosphere is irrelevant.  Brown dwarfs of various descriptions and sizes have a vast cocktail of chemicals and gases in their atmospheres, yet still emit light and heat (4).  This is not a Jupiter clone, but something rather more special than that.

The distance between these binary objects implies that the smallest emits its own light, despite being 'only' 5 Jupiter masses.  The distance between them is also telling in other ways.  Put simply, the planet should not have formed so far away from the brown dwarf parent star.  It could not have accreted enough material at that distance, because the proto-planetary disc would be too dispersed to allow 5 Jupiter masses worth of material to bind together during the lifetime of the system.  This means that the planet formed as a binary companion in its own right, gravitationally collapsing like a star.  A Dark Star, in effect...

This is a useful precedent for distantly located binary Dark Stars.  A further example is AB Pictoris, described by the ESO team in their press release.  This discovery is also a good example of a Dark Star located in another star system, this time one much more like a 'proper' brown dwarf.

In the image below, we can see the sub-brown dwarf companion to the bottom left.  It is orbiting the parent star at a distance equivalent to 270 times the distance from the Sun to the Earth.  This is approximately the correct distance that Zecharia Sitchin's Nibiru would be located at, dependent upon the eccentricity of the orbit, of course.

I have reproduced some of the ESO press release here, which gives plenty of excellent, indisputable factual information:

"In the course of the same survey, the astronomers also discovered an interesting companion to the young star AB Pictoris of the 30 million years old Tucana-Horlogium Association located about 150 light years from Earth. This companion, imaged for the first time in March 2003, has a near-infrared luminosity and spectrum which points to a light and cool object.

"Using the same strategy as for 2M1207b, the astronomers...confirmed that the companion is not a background object. Evolutionary model calculations point to a 13 to 14 Jupiter masses object with a temperature of ~1700 Kelvin. As the presently accepted separation between a high mass planet and a low mass brown dwarf is at 13.6 Jupiter masses, the newly discovered companion thus may lie at the exact boundary between these two classes of sub-stellar objects. It might therefore play the role of a unique "Rosetta stone" in the future. Remarkably, this companion is located very far from its host star - about 9 times further from AB Pictoris than Neptune is from the Sun. Nothing like this situation has ever been seen before in a planetary system." (1)

Is this incredible discovery actually a precedent for our own Solar System?  How did the binary sub-brown dwarf form at such a distance from AB Pictoris, if we assume, as was once thought, that orbiting planets always just accrete from the proto-planetary discs of stars?  There is more going one here than that, which leads us to wonder whether the same mechanism happened in the area around our own Sun.  Perhaps there have been significant patterns of planetary migration, or a miniature birthing cluster of loosely bound stellar embryos.

In my book, "The Dark Star", I explore this problem in some detail, and produce evidence-based conclusions that may even shock some scientists.  The tide is turning towards a binary Solar system, of that you can be quite sure!

2)  Steve Connor "First Image of a Planet Outside Our Solar System" The Independent, p19, 30 April 2005, with thanks to Dave and Martin Cosnette