Recent excavations in Iraq have brought to light a ‘city of graves’ used by the ancient Sumerians, that dates back over 5000 years.  Again, the organisation of burial seems to have been fastidious; reflecting the importance attached to the remains of the dead: 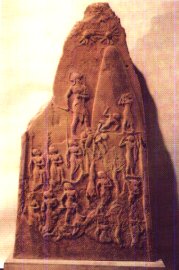 “Diggers work at an ancient site that scientists describe as the largest "city of graves," where the Sumerians used to bury their dead nearly 5,000 years ago in Umm al-Ajarib, 250 miles south of Baghdad.  The whole site is about two square miles with the cemetery occupying the largest portion, and …may hold hundreds of thousands of graves. The burials at Umm al-Ajarib are chiefly in coffins of brick laid in bitumen as mortar. The graves are regularly arranged, like cemetery lots, with streets and lanes.

“The Sumerians looked after the dead. Funerary rituals were of great significance because they believed if the dead were not buried properly their souls will return and haunt the living relatives,” said archaeologist Marwan al-Adhami. When a Sumerian monarch conquered a city, the first thing he would do was to “open the graves and release the souls” to chase away any enemy soldiers who escaped the sword, al-Adhami said.” (1)

According to the archaeologists, then, the Sumerian idea behind their burial ritual was to ‘trap’ the soul, and prevent it from escaping the grave to haunt its living relatives.  But the practice of grave desecration by conquering monarchs suggests there is more to this than the archaeologists admit.  Why open the graves to bring forth an army of enemy ghosts that could potentially haunt you?  This act of desecration is more likely one of spite, a triumphant token of dominance to prevent the souls of the defeated city from attaining immortality. 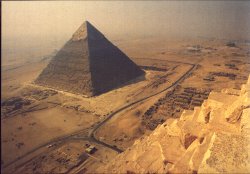 Like the Egyptians, the Sumerians needed to prevent their kas from immediately reincarnating, and did this by carefully burying their dead in this highly ordered fashion.  At the time of the passage of Nibiru, the graves would have been ceremonially opened and the souls of the dead would rise to a heavenly abode to attain reincarnation as gods.

Note also the age of the ‘city of graves’, at 5000 years old.  Sumerian civilisation had already been in place for over 1000 years, and a passage of Nibiru occurred in between, around 3760BC.

The need for this mass graveyard after this sacred date indicates the level of difficulty the Sumerians faced in maintaining secure burial sites for over 3000 years. The Egyptians later solved this problem by introducing bodily preservation through mummification, and building more and more secure tombs.

Furthermore, they designed the Great Pyramid to maintain an astronomical monument that would survive the rise and fall of entire civilisations, a device that became ‘activated’ at the turn of our current age, when Nibiru next passed through our solar system.  The Great Pyramid was aligned with the Messianic Star to allow the souls of the dead of 100 generations to escape the earthly cycle of birth and death.

Given that I have linked the Pagan mystery cults and the early Christian beliefs with the ancient Egyptian stellar deities of Osiris, Horus and Isis, it should be possible to find the concept of astral flight to the winged disc within these religious cults.  The Talisman of Orpheus gives us an immediately recognisable image of just this; the crucified godman below the seven moons and crescent of Nibiru.  Might we not see the astral ascent and resurrection of the Christ consciousness in the same way as the journey of the Pharoah’s ka into the Duat?  This might appear far-fetched, until we start to explore the esoteric teachings of these cults, when the stellar links become abundantly clear:

“..The real aim of such esoteric cults as Mithraism was…to teach the individual how to rise above this level altogether [one’s own astral, or planetary level].  The seven-stepped ladder of initiation was intended to free the soul from the forces of what was often symbolised as a seven-headed dragon.  Then, after death, his soul would be able to leave the solar system altogether and journey to a heaven beyond the stars.”  (2)

The Persian cult of Mithras, that saw such a dramatic resurgence in Rome, has very close links to that of the Gnostic Christian cult that also emerged at that time.  Gilbert points out the astral qualities of these Christian teachings;

“In Christianity there is a similar conception of the planetary or astral world as being the source from which we draw both our talents and shortcomings.  This is most clearly shown in the Book of Revelation, the last book of the Bible.  Here, the seven planets are represented as seven stars which are held in the right hand of ‘one like unto the Son of Man’.”  (2)

There is little doubt in my mind that this ‘allegory’ is based on the seven moons of Nibiru, the Messianic Star.  The role of the Christ figure as a Shepherd is tied in with this imagery, both in early Christianity and within the context of its parallel set of Mystery school cults:

“The Naassenes saw Jesus as identical to the mythical figure of the young dying son of the Great Mother they called the ‘many shaped Attis’.  This figure was also known in their hymns as Adonis, Osiris, Pan, Bacchus and Shepherd of White Stars – all of which are names for Osiris-Dionysus!
“The Mysteries of Adonis in ancient Antioch were celebrated  by cries that the ‘Star of Salvation has dawned in the East'." (3)

This Shepherd of the White Stars is the dark star, an immense world of fire, yet not a star.  Nibiru itself seems to reflect the ancient Pagan concept of Hell.  For instance, there are the Egyptian ‘lake of fire’; the Greek ‘huge lake blazing with much fire…and boiling with water and mud’ (as described by Plato in Phaedo); and the non-canonical account of ‘a huge lake filled with blazing mud’ in The Apocalypse of Peter.  Might not the Christian concept of heaven and hell have been derived from astronomical imagery?  Celsus seemed to think so:

“Now the Christians pray that after their toil and strife they shall enter the kingdom of heaven, and they agree with the ancient systems that there are seven heavens and that the way of the soul is through the planets.  That their system is based on very old teachings may be seen from similar beliefs in the old Persian Mysteries associated with the cult of Mithras.”  (4)

One might expect that the celestial imagery connected with the Christian journey into the after-life might end there, following the purge of the Mysteries from Christian doctrine by the Church.  Yet the most celebrated of Christian poems, Dante Alighieri’s “Divine Comedy”, is positively overflowing with it.  This might not be so surprising when one considers Dante’s influences:

“His writings have long been recognised as containing Gnostic and hermetic themes – for example, a century ago Eliphas Levi described Dante’s Inferno as being ‘Johannite and Gnostic’…More remarkable, however, is the link that Dante and his fellow mystics provide with the Knight’s Templar.  He was one of their most enthusiastic supporters, even after their suppression, when it was inadvisable to be connected with them.”  (4)

The third book of the “Divine Comedy”, called the 'Paradiso', concerns Dante’s spiritual ascent through the heavenly spheres.  Although believed by scholars to be purely allegorical, it is full of celestial imagery akin to Mystery schools and the Egyptian Book of the Dead.

“In yonder heaven the lumen gloriae
Reveals the Maker to created mind
Which in His sight alone finds peace for aye.

The whole if fashioned from a radiance
Shone above the Primum mobile,
Which draws vitality and virtue hence.”  (5)

From these verses we appear to have Dante describing the Glory of the Lord, pictured in the form of a ‘celestial rose', that winds around the Sun in such a wide orbit that it is considered only loosely bound.  Is this the vision of the dark star Nibiru, as seen from its heavenly seventh moon?  If so, how could Dante possibly have known?  As Picknett and Prince have described in the quote above, Dante had strong connections with heretical Christian organisations suffering suppression by the Roman Catholic Church.  His poem may have been influenced by their inherited teachings of the true nature of Christian belief, and was a way of releasing this hidden teaching, in a non-confrontational manner, at a time when the heretics were being purged.

This methodology may have been similarly used by both Nostradamus and Jean Cocteau, who have been linked with the Priory of Sion.  The latter’s modern depiction of a dark star at the scene of the crucifixion may have been the most clear-cut representation yet to emerge from these secret European mystery schools.

So it seems that hidden teachings within heretical forms of Christianity and the Pagan Mystery traditions pointed towards astral ascent to a location somewhat beyond the solar system.  If I am right about the use of the Great Pyramid as a focus point for the disembodied ka seeking rebirth in the physical realm of the gods, then this may be the destination of Gnostic and Pagan souls also.  Of course, this implies a belief in reincarnation by these parties, and Freke and Gandy have provided evidence to show that this was so (3).  This teaching has since been eradicated, and salvation is promised only upon the Second Coming of the Lord, an event for which we will have to wait another 1,800 years, I suspect.  The notion that a Christian Day of Judgement will destroy the world, as described in the Book of Revelation, allowing only the hallowed souls to be resurrected, reflects the notion that Nibiru’s next return will bring environmental catastrophe to the Earth:

“And there appeared another wonder in heaven. And behold a great red dragon, having seven heads and ten horns, and seven crowns upon his heads.” Revelation 12:3

“And his tail drew a third part of the stars of heaven, and did cast them to the Earth” Revelation 12:4  (6)

The belief that Jesus would subsequently save the awaiting Christian souls of Earth, who have been denied reincarnation by the present Church doctrine, reflects the Egyptian idea of astral liberation of the trapped ka towards the ‘Lord’, the Winged Disc. 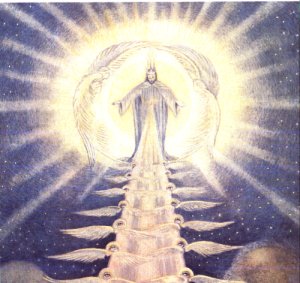 So is modern Christianity simply a variation on an ancient theme?  Does the Christian practice of burial, rather than cremation, imply the need for the soul to wait for the ‘Lord’, rather than seek immediate reincarnation on Earth?  That could explain why churches and cathedrals are essentially mausoleums, as Gore Vidal irreverently describes them.  It might also explain why so many Roman Catholic cathedrals double as solar observatories, capable of accurately measuring the passage of controlled light beams.

The extensive use of the meridiana in Roman Catholic cathedrals is described by J.L. Heilbron, and includes one in the Santa degli Angeli that is capable of tracking specific stars (7).  Perhaps it would also explain the Church’s fascination with astronomy, and why the Vatican has its own $3 million observatory at Mount Graham, Arizona (8).

If the essence of the original Christian Mystery, was a method to attain divine life by rebirth as a god in a physical heaven, then modern-day Christians are missing several pieces of the puzzle.  The Christian souls have no Great Pyramid to guide them into the Duat during the Second Coming; no Christian Book of the Dead to aid their subsequent journey through the bardo; and no concept of the physical reality of the Winged Disc and its heavenly moon.

Perhaps only Dante offers them true insight into what the early Christian message offered, a Gnosis closer to the religion of the Pharoahs than monotheistic Judaism.