Dr Who and the Winged Disk

Doctor Who is cult science fiction in Britain. The popularity of the programme has crossed generations, and I'm a big fan.  Doctor Who is a Time Lord, an immortal alien in human form.  He's currently played by the actor David Tennant, shown here. 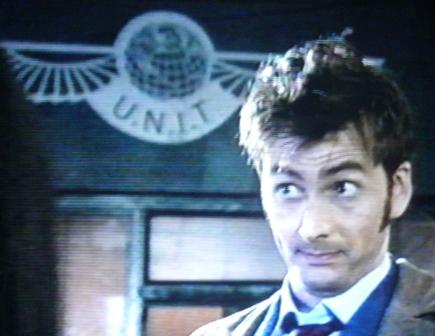 Was Doctor Who modelled on the idea of an Ancient Astronaut who visited Earth down the Ages, as per Von Daniken and Sitchin?  Well, probably not: the TARDIS is certainly not an object revered by the peoples of the ancient world, after all!  But, some of the symbolism of the ancients has certainly been borrowed by the creators of the series. 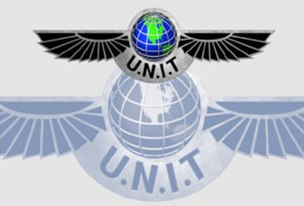 Symbols used in the series have evolved down the years, and it's interesting to note that one of them has recently become the classic Winged Disk of the ancient Mesopotamians and Egyptians:-

Here are some classic, ancient Winged Disks for comparison, as well as some USAF motifs: 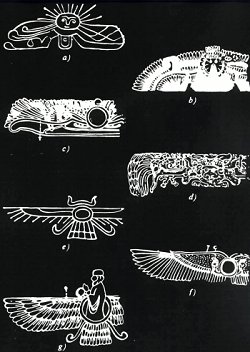 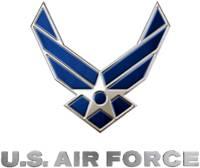 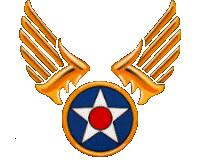 One of my fellow researchers, Greg Jenner, points out further similarities with U.S. Air Force investigations into UFOs, and also a very ancient Winged Disk symbol from the Indian sub-continent: 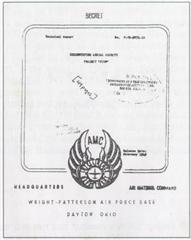 One can see a clear evolution of symbols here, both within the American armed forces, and from Ancient to Modern.  This is what Greg says about these images:

"'Project Sign' was a US government study on unidentified aerial phenomena happening at the time. Notice how the US fighter plane is in the shape of a cross. Compare that to the Hindu Naacal winged-disc symbol (see third image attached) also with a cross. Ancient aircraft known as Vimanas have also been linked to Hindu mythology. Some even suggest these ancient craft were flown by the Anunnaki themselves. Are the two winded-disc symbols simply a coincidence? I don't think so."

The Return of Gallifrey

In the last episode of Doctor Who featuring David Tennant, the Time Lords return, complete with their home planet. Moving through an inter-dimensional portal, the planet Gallifrey plunges into the solar system towards Earth.  It's is very reminiscent of the ideas surrounding the apocalyptic return of Planet X.  The Time Lords also resemble the concept of the Anunnaki of Nibiru - they are essentially immortal, powerful beyond human imagination and very ready to meddle in human affairs for their own ends.  In this context, Doctor Who resembles the god Enki - more sympathetic towards the plight of Humanity in the face of the powers of the Cosmos.  The Doctor's struggle to save the Earth features the enormous, fiery planet Gallifrey.  Curiously, it rather resembles the concept of the Dark Star, a sub-brown dwarf lurking beyond the outer solar system.

The Tenth Planet and the Cybermen 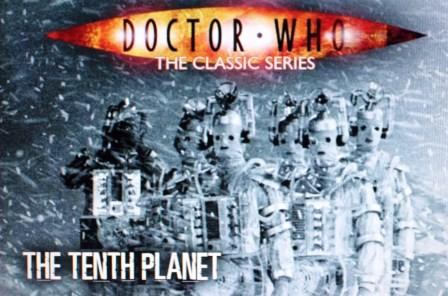 Did you know that the Cybermen came from the 'Tenth Planet'?  In an early episode of Doctor Who from way back in 1966, an incoming planet from the outer solar system - named Mondas - brings these soon-to-become classic enemies of the Doctor:

"The TARDIS arrives in December 1986 at a South Pole Space Tracking station where the personnel, under the command of General Cutler, are engaged in trying to talk down a manned space capsule that has got into difficulty.

"The Doctor realises that the problem stems from the gravitational pull of another planet that has entered the solar system and is now heading for Earth. His words are borne out when the base is invaded by a force of alien Cybermen. The Cybermen's world, Mondas, is draining energy from Earth - once its 'twin planet' - and the situation will soon become critical."

Notice also that the tracking station is based at the South Pole.  This fictional idea mirrors speculation in more recent times that a telescope based in Antarctica (The SPT) is monitoring the position of an in-coming Planet X.

I'm a bit of a Doctor Who fan, as are my wife and two boys.  I also enjoy the spin-off series 'Torchwood'.  Both series have roots in Cardiff, Wales, so it was a great surprise to hear that some of the filming would take place in Gloucester, my hometown in England.  Gloucester is no stranger to movie makers.  The interiors of the Cathedral Cloisters provided a backdrop for many of the Harry Potter movies. 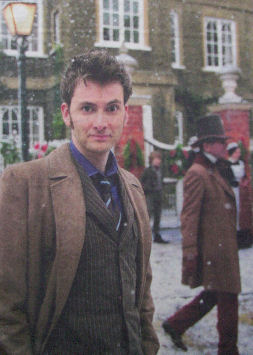 Acting on some inside information, my wife, Mrs Darkstar, took the camera and the kids and went in search of the filmset.  She was not to be disappointed, quickly discovering a hive of activity in Millers Green, a beautiful cul-de-sac of traditional buildings set within the grounds of Gloucester Cathedral.  She was one of the first 'locals' on site, and took a selection of photos and videos as the wintry film set was created in situ. 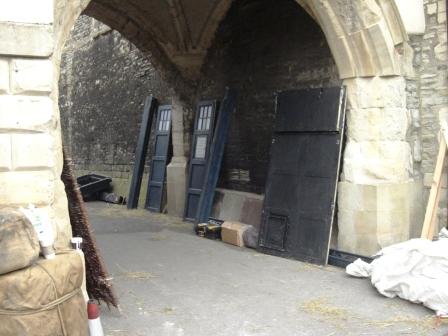 These photos show the TARDIS from flat-pack, to completely ready for filming. 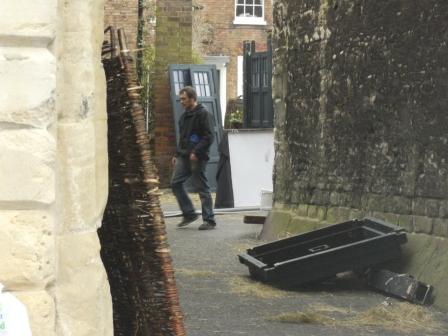 Millers Green is a secluded spot, so it was not possible to see what was going on from the security barriers erected at the entrance to the cul-de-sac. 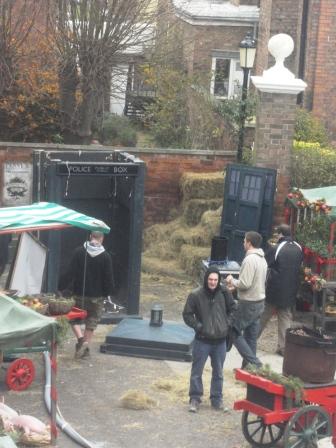 Ever resourceful, Mrs Darkstar worked her way through the interior of the cathedral, and eventually discovered a vantage point which provided a clear view of the proceedings. 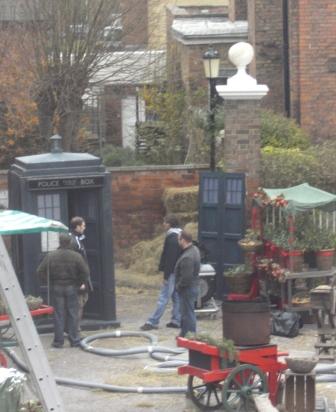 The filming itself took place during the night, from 8pm to 5am.  It was not possible to get images of the actual filming, unfortunately.

The local newspaper, 'The Citizen', provided the following information about the filming:

"Gloucester is set to be invaded by the Cybermen next week as Dr Who lands his famous Tardis in the city. Filming for the popular sci-fi drama will take place at various city landmarks including the Cathedral.  It is believed that the Doctor, played by David Tennant, will be joined in the special Christmas episode by his current companion Donna (Catherine Tate) and his former sidekick Rose (Billie Piper).

The storyline, featuring Cybermen - the Doctor's deadliest enemies - is being kept under wraps but the city's historic buildings will be transformed for the special episode. 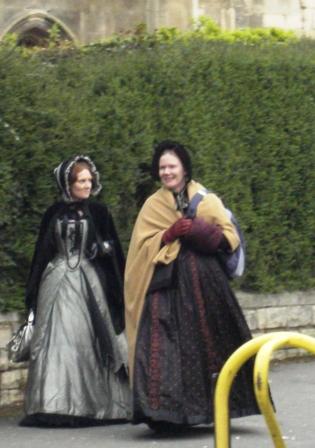 "Millers Green will be taken back in time to the Victorian days and appear as a market scene while the BBC drama team will cover the front car park of the Cathedral in snow to evoke winter."

The Dr Who 2008 Christmas Special is set during the Victorian era, and clearly has a snowy feel to it.  We don't get a lot of snow in Gloucester, so it's especially bizarre to see half the historic buildings of the town covered with it...artificial snow, of course!  As you can see here, the kids of Gloucester loved it:

There was a palpable sense of excitement in the city that extended beyond the kids.  After all, even the grown-ups grew up with Doctor Who, and the Cybermen and Daleks are now part of the fictional folklore of this country. 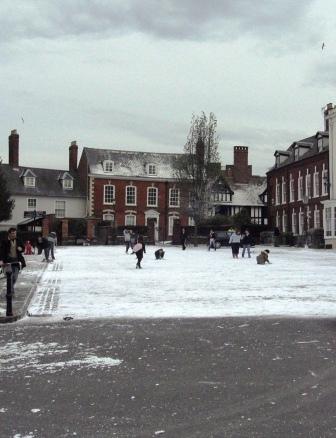 Russell T Davies, the genius behind the revived Doctor Who phenomenon, was impressed by the turnout of Who fans in the city:
"When we filmed in Gloucester in April, for the Christmas special, the people were marvellous.  It was the biggest turnout of fans we've ever had - there were hundreds of people.  It was like crowd control in the end.  We had a magnificent time in Gloucester, as it doubled for 1851 London. It looks beautiful on screen and Gloucester will be looking romantic covered in snow on BBC One on Christmas Day." 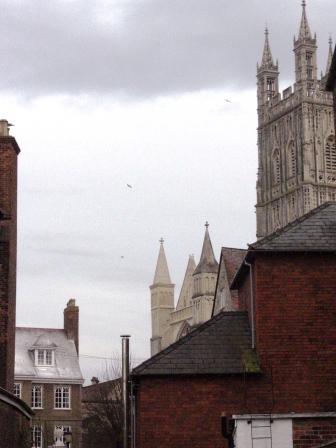 We couldn't resist having our photos taken amongst the props for the 'Doctor Who 2008 Christmas Special'.  The question is, will the 'real' monsters be any more scary than us? 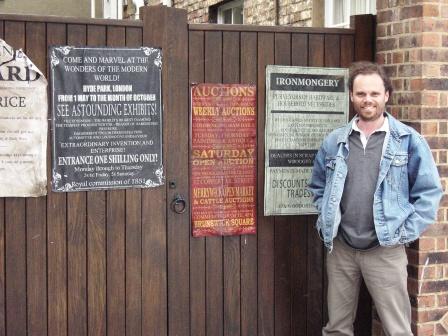 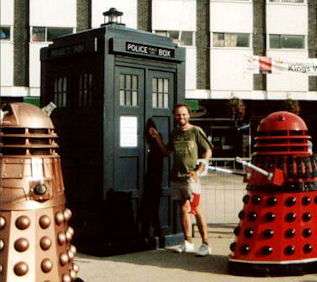 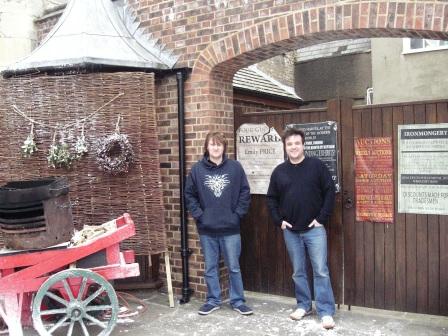