(Back to Dark Star Symbolism 1)

This is a 12th Century painting of the Cosmos by Hildegard von Bingen (found in the Rupertsberg Codex).  It appears to show a red star lying outside a dark layer, which itself is beyond beyond the stars. 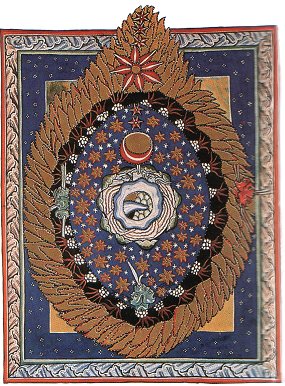 The red star moves around the Earth and Moon (centre) in an oval shape, creating a cosmic egg.  Here's a description of the vision by Hildegard von Bingen:

"Then I saw a huge object, round and shadowy.  Like an egg it was pointed on top...Its surrounding layer was bright fire.  Beneath this lay a dark skin.  In the bright fire hovered a reddish, sparkling fireball."  In this vision of the cosmos Hildegard saw the ethereal sphere with moon and stars below the dark skin.

This is very interesting indeed.  Was Hildegard having a vision of the Dark Star, the Sun's small binary companion?  Ask yourself the following:  Why is the red star beyond the sphere of stars, behind a black veil?  Why did Hildegard describe a 'sparkling fireball' in these terms?  If it was simply the Sun, then why is it beyond the stars, and why not describe it simply as the Sun, as she did with the moon and stars?

This appears to me to be a very clearly defined and accurate vision of the Dark Star, a small brown dwarf orbiting the Sun in an elliptical orbit.  It clearly left a deep impression on Hildegard. 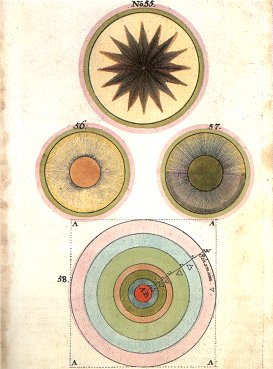 Here is a magical, Cabbala-style image from the 18th Century, by one Georg von Welling.  It shows the division of light and darkness in the creation myth of the Genesis story.  What interests me about this is the depiction of the Dark Star as the source of all, alluded to with the imagery of the 'innermost central fire, the grim mire in which Lucifer dwells until the Day of Judgement'.

Is there also an allusion to two suns in the second division of light and darkness? The Sun is 56, the Dark Star is 57.  It's an intriguing possibility, that God and Lucifer are epitomised by the two Suns in the solar system; one light, one dark. 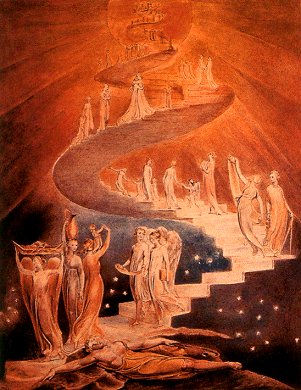 The visions and artwork of the English mystic William Blake are endlessly fascinating in their own right.  His depiction of Jacob's Ladder has significance for the Dark Star Theory.  Not the red 'Sun' is set far above the stars, as if set beyond the traditional starry sphere.  More interesting still is the depiction of the angels ascending and descending upon it to and from heaven:

I think this is an allusion to the Anunnaki, whose movements to and from Nibiru occurred during the perihelion passages of the Dark Star.  Indeed, Blake's painting seems to depict Heaven as this Dark Star.  I believe that this is accurate; that the Homeworld of the Anunnaki is the Biblical Heaven.  Such a place takes the form of an Earth-like world orbiting the Dark Star, a sub-brown dwarf orbiting the Sun at a great distance.  The denizens of this Heaven are living gods who created us by genetically engineering humans from the more primitive apes they discovered on Earth when they first visited our world.

What is Heaven like then?  Only a few humans have ever been there and returned, Enoch being one of them.  This Paradise is a warm, dark world.  It is protected from the dangerous ravages of the Sun's cosmic radiation by its distance and its location within the magnetosphere of the brown dwarf 'sun' it orbits.  There life-forms are capable of greatly lengthened lives; their genetic structure is not subject to a constant bombardment of harmful rays like all life on Earth is.  Only when the gods of Nibiru descended to Earth did they begin to lose their immortality, their children living successively shorter life-spans as the Sun's intense radiation took its effect.

The most beautiful alchemical artwork is to be found in the remarkable Splendor Solis, created in the 16th Century by S. Trismosin.  I have included this work before on the Dark Star Theory website, but would like to go over this material afresh here as Greg Jenner recently included one of the images in one of his essays. 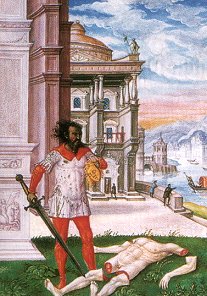 In the above image we have two characters, one with a golden head, one dark with red clothes and wielding a "double-edged sword of the two fires". I suggest this indicates the celestial duality of the two Suns.  The champion, equivalent to the god Marduk, has vanquished his foe, seemingly our more familiar Sun.

"But your head I will hide, that the world shall not see you..." Thus the Dark Star becomes an unfamiliar, hidden Sun, banned from the solar system for its cosmic 'sins'. 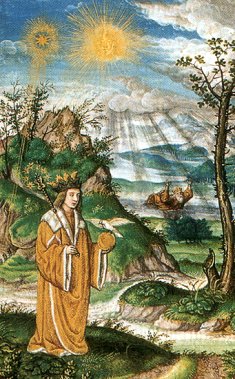 I absolutely adore this alchemical painting in the Splendor Solis series.  Two Kings are depicted, the older one seemingly drowning (King Urizen?) whilst the younger contemplates his sudden royal ascension clothed in garments clearly intended for a bigger man!  The younger king's sceptre is adorned with seven stars, and in his left hand he holds a yellow orb upon which sits a dove.  Dark Star symbolism abounds in this image!  The orb and seven stars, associated with a bird, are central Dark Star symbols.  To be then associated with Kingship is even more critical, and draws parallels with some Gnostic Christian symbolism, e.g. the Talisman of Orpheus.

But the real clincher in this compelling painting is the clear allusion to the Duality of Suns.  Our familiar Sun, shown to the right, is joined by a smaller sun which seems to shoot up into the sky like a comet.  Thus the Dark Star comes towards the Sun, creating the beginning of a New Age and the Ascension of a new King on Earth.

"From the frozen waters,
The King will rise again,
With 2 Suns in the sky"
Bruce Dickinson, 'Jerusalem' on 'The Chemical Wedding' album

To close this page of alchemical wonders, I would like to present this self-evident duality of Suns, known secretly to the Alchemists of old. 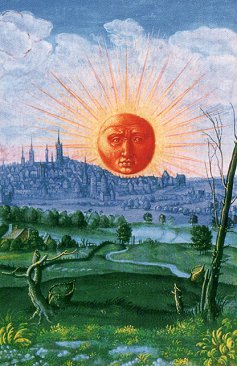 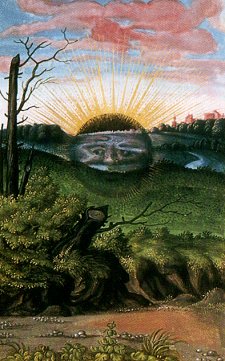 "The black sun is the outer sun, whose "dark, consuming fire" brings everything to decay. After Adam's fall, tainted by Original Sin, man is made "from the black sun's fire" according to the Book of the Holy Trinity."

Indeed.  The creation of Humanity finds its source in the heavens, the denizens of whom came here from the black sun; known in these pages, and in my book, as the 'Dark Star'.