Many of the Masonic emblems I have found most intriguing have been found in an excellent book by David Ovason called ‘The Secret Zodiacs of Washington D.C.’ Ovason sees the hallmark of Masonry in the layout of the American federal city, and concludes that the rich series of zodiacal images around the city point to esoteric knowledge flouted openly on the federal landscape.

Most citizens of the United States visiting their capital would be none the wiser if such symbols were to rear up and yell ‘Your Forefathers Wore Aprons!’  They would certainly be bored rigid by the thought that Washington D.C was laid out with the heavens in mind.  But the images are there all the same. 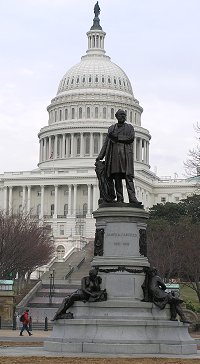 And the most anomalous of all is the Garfield Zodiac, a funerary cartouche in bronze that is set upon a statue dedicated to an assassinated President of the United States.  President Garfield was shot dead in 1881, which just happened to be a year of great significance among esoteric thinkers and various religious groups.  David Ovason describes how that year fitted into the thinking of certain American Rosicrucians, for instance:

“In 1881, the planets were operative on a far higher level than any statuary or verbal symbolism might suggest.  The year had a particular importance for those who were interested in the deeper traditions of astrological thought…The Rosicrucian, Thomas Henry Burgoyne…had already commented on the mysterious hypothetical planet, the ‘Dark Satellite’, which he insisted shadows the Earth, and is linked with the undeveloped parts of humanity.  He informed his readers that, in the more glorious days of human history, known now as the Golden Age, the satellite was distant from the Earth.

“However, in the later Iron Age (through which civilisation was now living) it was too close, so that its ‘dark shadows became more and more bewildering’.  In the year 1881, Burgoyne promised, this Dark Age would begin to recede, its malevolent influence having passed its darkest culminating point.”

This makes absolutely no sense at all, of course.  The ‘Dark Satellite’ may be another name for the mysterious ‘Eighth Sphere’, beloved of the Theosophists.  But does it represent an actual astronomical body?  If so, it does not shadow the Earth like the Moon, at least not in a physical aspect.  One presumes Burgoyne alludes to a spiritual meaning in all of this, an allegory highlighting the enigmatic importance of that year 1881. 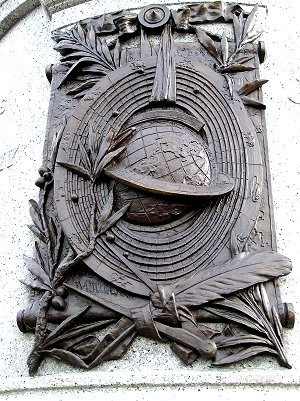 But then things get a little more complex.  The year of this ‘darkest culminating point’ marked the assassination of President Garfield, himself a mason ‘initiated into the very highest degrees’.  The Zodiac that adorns his statue in Washington DC was designed by John Quincy Adams Ward and is really rather puzzling:

“The seven planetary spheres are encompassed by an outer concentric on which are figured tiny sgraffito images on the 12 signs of the zodiac.  The spheres are represented as channels, into which have been dropped a number of small globes that represent the planets…The design of this horoscope is unique.  The sculptor, instead of representing it as a standard horoscope chart (as one might expect) has resorted to a system of Ptolemaic spheres, favoured by the late mediaeval Rosicrucians and alchemists for their own arcane diagrams.”

Well, Burgoyne was a Rosicrucian, and he was interested in this extra ‘planet’, or ‘Dark Satellite’.  One can be forgiven for asking a pertinent question: does the Dark Satellite appear on this Rosicrucian zodiac, itself devoted to an event in 1881?  As it turns out, an extra ‘planet’ is to be found on the Zodiac, but one that is quite unexpected:

“Examination of the figure reveals that it cannot portray accurately any particular event in the skies, since one of the ‘planetary orbs’ is reduplicated. As a result, if we read the spheres as relating to the traditional astrology, we would be compelled to conclude that the horoscope has two Suns!”

What are these Master masons trying to tell us exactly?  The extra planet, or ‘Dark Satellite’ of the Rosicrucians is a second Sun.  And it seems to have achieved its ‘darkest culminating point’ in 1881, the year of the assassination of a President of the United States.

During a lecture once heard Robert Bauval mention that the ancient Egyptians spoke of a second ‘Sun’, but he quickly assured us that they meant Sirius.  I’m not so sure.  I think this second sun is an integral part of our solar system.  I think that this dark sun is the ‘comet’ in the Royal Arch diagram, the second sun of the Garfield Zodiac, the Masonic all-seeing Eye, and the ‘Star’ of the Tarot.

It is the 'radiant' or 'Blazing' Star of the Freemasons that adorns their Lodges, which marks the pinnacle of their zodiacal ladders.

Frank Truyen recently recommended a book to me that contained a whole chapter on the 'Dark Satellite'.  This turned out to contain plenty of additional material about this celestial object so beloved of the esotericists of the 19th Century.  Aspects of it still puzzle me, but I will share with you what I have.

The book in question is written by an astrologer by the name of Zolar.  He describes it as an orb of evil that is of immense importance to the modern world crisis:

"During the Golden and Silver Ages of our Earth's evolution, this Dark Satellite was in the aphelion of its orbit and then its influence was scarcely felt. Its influence then was seen and recognised in its true relation of animal force and undeveloped good.  As a factor of evil it was still imperceptible. But during the Copper and Iron Ages the orb gradually approached the Earth, and its dark shadows became more and more bewildering and more potent until the year 1881.

"Then it passed its grand perihelion point.  It is now slowly but surely receding, and although the clouds are not completely lifted from the mental horizon, the fact is the fearful conflict which occurred at the perihelion is over.  Yet, the confusion and chaos of today seem more widespread and more rampant than ever before in the world's history. Still it is past its darkest portion of the orb and its culminating point."

So the World is said to become increasingly wrapped up in the shadows of this Dark Satellite as it achieves its perihelion in 1881.  At its furthest point its influence is barely felt.  In orbital terms this gives the distinct impression of eccentricity, but the time-span of this eccentric, and possibly elliptical, orbit is described in terms of Ages. These terms are not defined.  Are they Geological in span, or is this 'evolution' in terms of humanity's development, or are these historical Ages?  This is vital if a parallel is to be drawn with the Dark Star.

Further, I would have said that the description of the orbit is back-to-front: that the Dark Star's aphelion took place in 1881AD, and that it reached it darkest point meaning literally its darkest countenance.  I would argue that its perihelion was the Messianic Star ~2000 years ago, which has rather different connotations for the fight between good and evil.

Zolar describes the spiritual beings that are associated with the Dark Satellite, and they might be one with the gods, the Watchers or Anunnaki:

"Throughout this whole sphere are numerous races of Spiritual beings, many of them possessing the highest forms of cunning and intelligence possible on the animal plane.  It is these beings who are neither elementals not elementaries, but who are the producers of the greatest portion of the suffering  and misery which afflicts all humanity.  It is within the dark center of the Astral realms of these beings, the Spirit of lies, murder, fraud and religious imposture are first formulated."

"So they called forth a form

From the Deep dark abyss

To embody their evil desires.

From the realms of the dead,

Arrayed in its magic attire.

As it passed o'er the earth

From its breath of poisonous fire."

Any readers of Zecharia Sitchin will instantly recognise the similarity between this description and those of the Sumerian/Babylonian Nibiru/Marduk, not to mention the ruling council of the Anunnaki!

It seems to me that the latter-day esotericists have indeed inherited a rather ancient belief in a hidden celestial object that brings ruin upon humanity periodically.  They have marked out the date 1881AD as important in this scheme.  This is important because this would also mark out a half-orbit of 1881 years if the Dark Star appeared 2000 years ago.  That is, Nibiru's complete orbit creates the inter-calendrical period of 3760 years, and 1881AD marks its most distant, or darkest point: 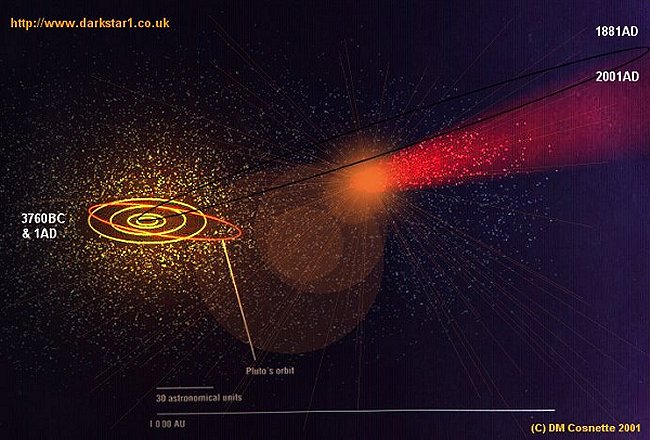 Perihelion: ~3760BC: the start of the Jewish Count of Years and Nippur Calendar

Perihelion: ~1AD: The Messianic star and start of the Christian Calendar

Next perihelion: ~3760AD  Close to Nostradamus' End of Days

They just seem to have become a little mixed up down the millennia about the difference between the darkest point of the orbit and the dark orb's power at perihelion. After all, it seems highly unlikely that Nibiru passed this way 123 years ago.  For the same reasons that it could not be about to re-appear now.

Zolar "The Encyclopaedia of Ancient and Forbidden Knowledge" Ch7, Abacus 1973

With thanks to Frank Truyen for the reference and book-search.  Thanks to Andy Goldie for the photos of the Garfield Monument.