A very bold idea was recently put to me.  Could one of the Sun's closest stars have been incorrectly identified?  A correspondent on MySpace named Chuck has been deliberating about this for a long time (1).  His opinion is fuelled by the fact that Barnard's Star, a small red dwarf some 5.8 light years away, has a proper motion across the sky that is, frankly, remarkably fast. 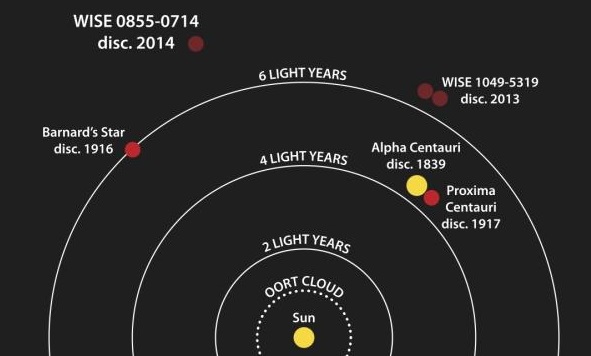 Chuck's contention is that Barnard's Star is actually much, much closer.  That Barnard's star might, in reality, be a duller brown dwarf in orbit around the Sun.

This is a very bold notion indeed.  It would fly in the face of received wisdom about this star, which has been closely studied by astronomers since its discovery in 1916.  Barnard's Star is a relatively faint star in the sky, with a relative magnitude in the order of 9.  It cannot be seen with the naked eye.  It is racing towards us at a phenomenal speed, and in about 10,000 years will be closer to us than Proxima Centauri, having covered 2 light years in that time!

It was thought for a long time that Barnard's Star had large companion planets.  It seemed to wobble in space, indicating the presence of an unseen companion of considerable size.  This concept led to various notions of one day travelling to Barnard's Star (no need...Barnard's star is travelling towards us!). 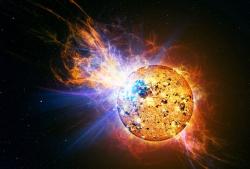 There are some exciting correlations between Barnard's Star and my proposed Dark Star.  My Italian astronomy student friend performed some calculations for me regarding how planets in the outer solar system would look.  A Jupiter-type planet flung out beyond 500 Astronomical Units would have a similar apparent magnitude.  This was quite encouraging, but came with a number of caveats. We simply don't know enough about old sub-brown dwarfs to be able to precisely describe their magnitude at any given distance.

Barnard's star can be found in the sky in the same region that I predicted for a sub-brown dwarf orbiting the Sun.  It is moving very fast, covering a perceived distance in the sky of the Moon's diameter in about 1000 years (2).  Combine that with its very rapid approach, it might just be moving in a highly elliptical orbit, having just moved past aphelion.  However, before advocating such a possibility, it was necessary to check back to the science surrounding Barnard's Star to see if it was possible that someone, somewhere had made a big mistake.

It turns out that Barnard's Star has been studied closely for many decades.  Its distance from the Sun has been calculated using two methods.  Firstly, using the parallax method to measure the star's relative position against the background field of galactic stars as the Earth changes its position with respect to the Sun. 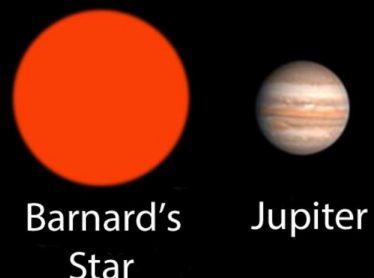 Secondly, looking at Barnard's Star's light spectrum to gauge its stellar characteristics (it is deemed to be a very, very old red dwarf), and from that working out its absolute magnitude on the scale of star types.

Then, working with both relative and absolute magnitudes the distance can be ascertained.  Between these two methods the distance of 5.8 light years has been worked out, and confirmed, most recently by the Hubble Space Telescope in 1999 (3).

It seems unlikely that these studies could be so wrong.  However, before rejecting the notion entirely, it is worth reflecting on a couple of anomalies in the study of Barnard's Star.  In 1998 it was observed to emit a staggeringly strong flare.  Given that Barnard's Star is over 10 billion years old, twice the age of our own Sun, this was quite a feat.  No one really knows what's going on here.

"Hubble observations, taken in March 2019, revealed two ultraviolet high-energy flares, and Chandra observations in June 2019 uncovered an X-ray one. Both observations were about seven hours long. “About 25% of the time, Barnard’s star unleashes scorching flares, which may damage the atmospheres of planets closely orbiting it,” the astronomers said.  “If these snapshots are representative of how active Barnard’s star is, then it is pumping out a lot of harmful radiation,” said co-author Dr. Girish Duvvuri, also of the University of Colorado. “This amount of activity is surprising for an old red dwarf.”" (4)

Another aspect to studies on this star is that the controversy over its wobble has never really been entirely cleared up.  If Barnard's Star was seen to move around in an odd way with respect to its neighbouring star field, then it seems possible that we, again, don't entirely understand all that is going on here. Astronomers now seem to automatically correct any perceived wobble: 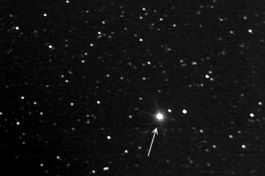 "The star is now used by Hubble astronomers to debug problems—when a "wobble" appears in Barnard's Star today, it is usually assumed there is something wrong with the telescope." (2)

This worries me.  If you observe a wobble, you observe a wobble.  I know the HST has had its problems, but it seems a bit rich to define Barnard's Star's distance and properties using the HST, then on the other hand to assume any anomalous readings using the same telescope can be put down to measurement error.  Perhaps related to this 'wobble', in 2018 astronomers confirmed the presence of a super-Earth exoplanet orbiting Barnard's Star (5) - unfortunately lying beyond the red dwarf system's 'snowline'.  Unlikely, then given the relatively high distance and low mass.

Whatever the case, it remains unlikely that Barnard's Star is, in reality, the Dark Star.  It's quite possible that a less studied object may have been misidentified in this way.  Indeed, I think this is the most likely scenario for the eventual discovery of the Dark Star.

If, say, the Dark Star's apparent magnitude is 10 (this is a logarithmic scale, it should be noted) then there will be no shortage of contenders, many of which have been neglected by astronomers who may have dismissed the object as a faint galactic field star.  So, Chuck's idea is along the right lines, certainly, I'm just not so certain that it can be such a celebrated object as Barnard's Star.