The Ball of Redemption

A frequent contributor to the Dark Star Theory web-site, Greg Jenner has sent through a selection of prophetic quotations attributed to the devout, visionary Catholic Veronica Lueken. 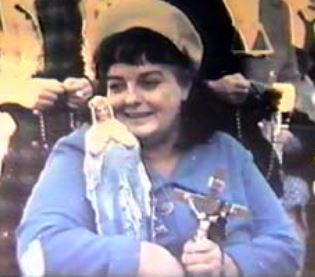 The visions were from the Virgin Mary and involve a 'Ball of Redemption', which is called a 'Second Sun':

"God, your Father, sends the sun to shine upon you. God, your Father, can also send the sun to burn you. A second sun lies out in your atmosphere, the Ball of Redemption. I repeat, My children, it is not a myth, nor a story; it is a fact." - Our Lady, December 31, 1974

"There is in your atmosphere of earth a Ball of Redemption hurrying to earth. It is of supernatural origin. Those who have cast aside the knowledge of the supernatural shall not be given the grace to observe the coming Chastisement. When it enters upon your atmosphere, hearts shall be gripped with fear. Many shall run to hide themselves, recognizing the wrath of their Lord." - Our Lady, September 13, 1975

"And it will be known to man because when the Ball of Redemption is used as the chastising agent, you will see it for about two weeks before it ever hits earth. And that, I can assure you, will be a most frightening incident for most. - Veronica's commentary, July 15, 1973

"The Warning, My child, will come soon, and if mankind does not heed this sign from the Eternal Father, there will follow fast on it the Chastisement by the Ball of Redemption." - Our Lady, August 21, 1975. 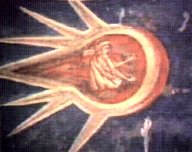 Veronica - "I see a great light, a flash! It's so hot, this flash! Oh, there's a large ball of fire. Oh, it's very hot, and it's whirling through the sky, and it's shooting off sparks behind it. The sparks--they're large pieces of rock, and they're falling, falling down.  Now the waters, the waters are rising very high. I can see the waters. Oh! Oh! Oh, the waters have come in. They're so high! And I see some cities. I see a large city, and the waters are now--oh, they're pounding against the ground. And now I see the buildings--they're falling! Now the ground is cracking, and the buildings are falling into the holes. Oh! Oh! Oh!  -  June 16, 1973

"The world as you know it shall be changed--not completely, My child, annihilated as in the time of Noah, but changed. The peace promised shall be given at this time." - Our Lady, December 24, 1974

"Watch, My child, what is to be...."
Now I see--everything is flattened back there. It looked like it was a city, but it's flat. And there's smoke rising, and everything looks like it was just knocked over like a stack of cards. Oh! Oh!...
"Look, My child, out there. The mariners are weeping."
Veronica - Mariners weeping? Now out on the water there are ships out on the sea. And I see something very strange. I see the men there. They're all holding their hands to their faces. And they look like they're actually crying. The men are crying.
And then one man is saying: "But that I could have the dust to throw over my head of that once great city. Oh, Babylon the great, you have fallen!" They're all looking now onto the--over towards the land, and the land is just like it has been completely destroyed. - Our Lady, April 13, 1974

Veronica - "And I see a man, a very kind man. He has--oh, He has very white hair and a heavy beard, and He's smiling. He looks like, sort of like a real nice grandfather. Oh, He thinks--oh, our Father is smiling.... And He's holding--it looks like a scepter in His right hand. And He's pointing down now to His chair, and He's, like bouncing a ball....
"My child, that is a most tremendous ball you are seeing. It is the Ball of Redemption. It is at the fingertips of the Eternal Father to do as He wills. Pray that mankind will awaken and escape this great Chastisement, My child. It will rush into your atmosphere without warning. Scientists will look with fright, as will the ordinary man.
"Know, My child, that no scientist will know an explanation for its appearance." - Our Lady, September 6, 1975 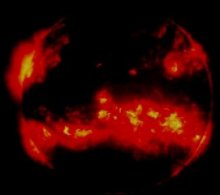 Veronica - "Oh, my! Our Lady is pointing up to the sky, and I can see a tremendously large ball of fire. It's beyond description. It's the most frightening thing I've ever seen. And it's going through the air at a very fast speed, and I can see over on the right side of the sky an outline of the earth.   And the ball is heading for the earth and it's striking, the tail is setting fire to the side, I can see here, of the earth. Oh! Oh! The tail has intersected the earth, and the ball is now circling the earth. Oh! Now it's growing very dark. I can feel the great heat.  Ohh! - August 21, 1976

"You ask, My child, why this has been called the Ball of Redemption? Because, My child, it is the manner in which the Eternal Father plans to redeem mankind from his sins." - Our Lady, April 17, 1976