This has got to be the best set of UFO photographs taken in Britain for some time.  The story has appeared in a few of the U.K.'s national newspapers already, like the Daily Mirror and The Express, and has circulated around the UFO chat-groups on the Internet.  I've reproduced some of the five images here for some closer analysis, although these are poor copies compared with the digital originals, it has to be said.  Nevertheless, they offer us the chance to take a closer look.  I also include new information given to me by the case's main investigator, Bob Boyd.

The case has been investigated by Bob Boyd, of the Plymouth UFO Research Group, working in conjunction with the Cornwall UFO Group, who originally made contact with the photographer.  Quoted in the Western Daily Press (Friday 20th February 2004, p11) he says: "There is no doubt in my mind that it's the real thing" and that the photographs had been confirmed as genuine by a photographic expert called Tim Farrell, who is an associate of the Cornwall UFO Group.

Bob Boyd explained that the photographer, a 'Devonport Dock Worker' who wishes to remain anonymous, was experimenting with his new digital camera on 28th January, just before 6pm, at St Budeaux Square. He had been taking some long-exposure night-time shots of the town.

These images were not taken by a weak or insufficient camera. They are not entirely in focus and the lights seem to be overly saturated which is normal from a longer exposure. The images you see here were taken by a high quality Nikon DX1, and the UFOs appeared on two of the five photos taken. They were 3 and 4 second exposures respectively, taken 18 seconds apart.

The photographs are of a sufficient quality and mystery to have prompted the Royal Navy to ask to see them for study.  A source in the Royal Navy has commented that Lynx and Sea King helicopters were in the air that night but that they 'couldn't reveal their whereabouts'.  Are these photos of a helicopter viewed from an odd angle?  It seems unlikely.  Furthermore, nothing was picked up on radar by Plymouth City Airport, according to the Western Daily Press, which would seem to dismiss this possibility completely.

The structure of the 'craft' is certainly in keeping with classic 'flying saucer' reports.  The object appears to be self-luminous in the darkness of the January evening, even of a ghostly appearance. It seems to be set behind the hill to my eye. But the haziness of the object in the image, which suggests distance and therefore size, may be because of the object's movement during the 3-4 second exposures.

(The photographer was not trying to capture the UFO when he took the photos, and so could give no information about the movement or otherwise of the UFO).

If there was only one photo it might be tempting to dismiss it as a lens flare or some kind of aberration of the camera or film, but the consistency between the photos suggests that something tangible was photographed.  In the two images shown above, different views of the UFO are shown next to each other to give the reader the sense of their physical consistency.  It is interesting to note that the bright central highlight of the disc in the lower photo is seen to be equivalent to the raised feature of the side-on image above it.  This allows one to appreciate the 3-D structure of the UFO.  Bob told me that the correlation between the two images is even better on the original digital photos: the detail of the lighting effects on one image of the UFO corresponds closely with the other.

In our telephone conversation Bob was able to give a few extra details.  Whilst the witness's identity is a closely guarded secret (he strongly wishes to remain anonymous, and those wishes are being respected by the Cornish investigators), it is possible to say that he is a highly regarded individual whose reputation appears to be above question. He also has an excellent working knowledge of photography.

Prior to taking these photos the gentleman had always been sceptical of UFOs, and these images from his own camera came as a great shock.  Bob considers him to be a 'great witness'.

We at 'Cosmic Conspiracies' are impressed by these images and would like to congratulate Bob Boyd and the Cornwall UFO Group for successfully bringing them to the attention of the public whose interest in UFOs seems undiminished. It remains to be seen what the true nature of these images is.

The Photographer of the Plymouth UFO, Mr John Nicholls, 52,  has now come forward and has put the original photos onto two dedicated new websites, along with his story: 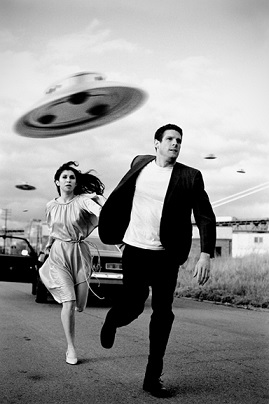 Danny Govier has sent through the following excellent piece of analysis on one of the photos taken in February 2004.  The image shows a large number of these objects over St Budeaux Square, which in itself would tend to rule out a visitation by an entire fleet of unwitnessed UFOs over Plymouth!  At the time of writing the above article we had not seen this particular image, and our opinion about the source of the anomalies was based entirely upon the low-quality images in the newspapers.  Several readers have written to argue the case for these anomalies being attributable to lens flares and we have been increasingly sympathetic to this explanation.  The analysis below leaves one with only one conclusion; the Plymouth UFOs are indeed lens flares, as initially proposed by Russell Callaghan of what was then UFO Magazine:

"The photograph contains a lens flare, exaggerated by the lack of sharp focus on the image, if the light source was central and head on we would see a much rounder flare, I would even suggest that we can see a light from either an aircraft or helicopter banking to the pilots left, judging from the angle of the flair (sic). It could also be something like the International Space Station passing across the horizon, it is very visible on certain orbital passes, it could also be something unknown. It is though a light source, the multi-coloured circle of light is nothing more than a lens flare."

As it turns out, the light sources are simply the street lights in the town: 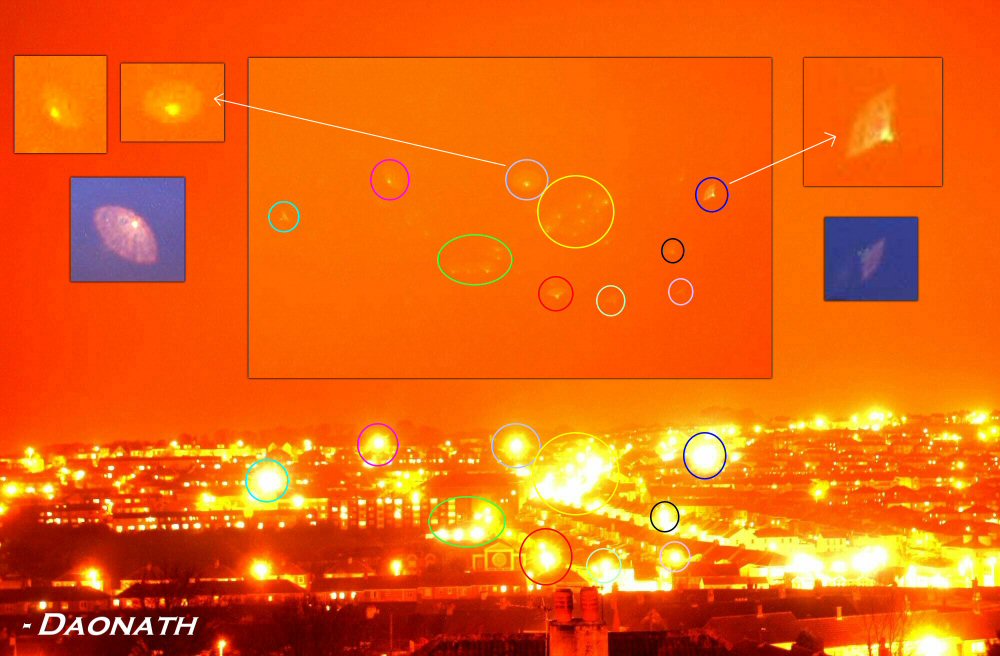 Correspondence about the Plymouth UFO

"Hello Andy, my name is Mel Hazell and I have seen the object of recent interest.  It was on March 7th 2001 at 04-30 in the morning and I was working as a postman at the time in Christchurch, Dorset.  At 04-30 I went out to my garage to fetch my bike to ride to the sorting office when as I rounded the corner of my house there before me very low in the sky and absolutely huge was a circular object almost the colour of the orange street lights. At first I didn't know what to do, to run indoors for my camcorder, camera or binoculars, and in the event I was so in awe of what I was seeing I did neither.

"I watched it for about six minutes and I would say that it was stationary during that period. After approx. six minutes it suddenly 'shrunk' or closed like the shutter on a camera and in doing so turned bright white then it was gone.  Then I rushed indoors for my binoculars to see if anything was there but there was nothing. I was almost late for work and I told loads of people about it but they all laughed and said I must have been on the bottle. But I know what I saw and it was very like the recent sighting in Plymouth.  Please reply because I have tried to find another person somewhere who has also witnessed this and the only one I found on the internet lives in Israel"