The secret knowledge of the Dark Star appears to be widespread within esoteric literature, as I have discovered over the last few years.  It often takes the form of an anomalous symbol connected with 7 stars, and featured as a counterpart to the Sun and Moon (1).  Sometimes, the Dark Star is described in words, as a 'true' Sun that is more significant than the Sun itself:  For instance, the Persian and, later, Roman cult of Mithras:

The fourth book of Zecharia Sitchin's Earth Chronicles, entitled 'The Lost Realms' (1990), deals with South American and Meso-American evidence for the existence of the Anunnaki.  He argues that early Sumerian myths transferred to South America with the migration of the Anunnaki themselves, who were celebrated by later indigenous peoples there as their ancient gods.  Included in this are symbolic references to the Winged Disc:

"Tribal beliefs...held that at the very beginning there was an Olden God, creator of All Things, of the Heaven and of the Earth, whose abode was in the highest heaven, the twelfth heaven:

"And the Toltecs knew that many are the heavens.

They said there are twelve superimposed divisions;

There dwells the true god and his consort.

He is the Celestial God, Lord of Duality;

His consort is lady of Duality, Celestial lady.

This is what it means.

He is king, he is lord, above the twelve heavens.

"This amazingly sounds like a rendering of Mesopotamian celestial-religious beliefs, according to which the head of the pantheon was called Anu ("Lord of Heaven") and who, with his consort Antu ("Lady of Heaven") resided on the outermost planet, the twelfth member of our Solar System. The Sumerians depicted it as a radiating planet whose symbol was the cross.  The symbol was thereafter adopted by all the peoples of the ancient world and evolved to the ubiquitous emblem of the Winged Disc.  Quetzalcoatl's shield and symbols depicted on early Mexican monuments are uncannily similar." (3)

The civilisations of Central and South America do not appear to have been as ancient as those of Mesopotamia and Egypt, but there is plenty of evidence to suggest that some cross-pollination of culture occurred, possibly via such sea-faring nations as the Phoenicians, or even the Sumerians. As amazing as it may seem, some artefacts that have been unearthed in Bolivia, in the vicinity of Lake Titicaca, are inlaid with cuneiform script that seems to be of Proto-Sumerian extraction (4). This has lead some scholars to seek a controversial link between the Mesopotamian culture 5000 years ago and South America.

We may never know for sure whether there is a basis for historical fact here, partly because of the almost wholesale destruction of the indigenous cultures by the Conquistadors, and partly because of the potential for hoaxed archeological finds.  Little has remained to enlighten academics and archeologists about the early mythological sources, and controversial archeological finds that run against the grain of orthodox thought tend to be side-lined or ignored by academics keen to maintain their credibility.  Then there was the purging of the Church.  The genocide that took part in those early days of European colonial conquest ran in parallel with a purist drive to eradicate ancient pagan knowledge.  Even if the ancients of South and Central America knew of Nibiru, how could we find out?

Certainly, many wonderful monuments remain, and archeologists have uncovered an advanced dating system suggestive of high learning, particularly among the Mayans.  Researchers like Richard Day have carried out interesting archeo-astronomical studies to determine whether hidden knowledge of Nibiru can be found in the layout of the monuments themselves, particularly those of Teotihuacan (5).  The intricate and accurate dating systems, combined with the Mayan 'Ages', are suggestive of thinking on a Cosmic scale, possibly incorporating prophecy of catastrophism from the sky.

The renowned author of Central American myth, Maurice Cotterell, has investigated whether these Ages may be connected with great Solar cycles of about 3750 years (6).  This brings the phenomenon within reach of the orbit of the Dark Star: Sitchin approximates to 3600 years for his Nibiru, and I have suggested the inter-calendrical period of 3760 years for my Dark Star.  All of which is suggestive of an cosmic time-period lying at the heart of ancient religious thinking.  I shall explore this link in more detail in my forthcoming book 'Binary Companion'.

What is missing is a direct mythological reference to the Dark Star amongst the remaining archaeological evidence.  Was such direct evidence lost,  or did it never exist in the first place?

Encouraging information has been passed to me by Lee Covino.  He spotted an interesting drawing of an Incan altar piece that had been destroyed by the Spaniards in Cuzco, Peru.

Cuzco was the capital city of the Incan Empire and was heavily looted by the Conquistadors.  After the destruction an attempt was made to understand what the Incas were worshipping at the 'Coricancha' in Cuzco.  It was decided that the temple was dedicated to the Sun, based upon the accounts of several Europeans at the time, many who happened to be Dominican friars.  Graham Hancock quotes Garcilaso de la Vega:

"What we shall call the high altar, although this expression did not exist among the Indians, was to the east, and the roof, which was very high, was of wood, covered with straw.  The four walls were hung with plaques of gold, from top to bottom, and a likeness of the Sun topped the high altar.  This likeness was made of a gold plaque twice as thick as those that panelled the walls, and was composed of a round face, prolonged by rays and flames...the whole thing was so immense that it occupied the entire back wall of the temple." (7) 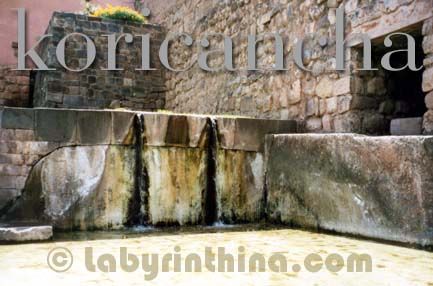 And so Coricancha became known to Westerners as the Temple of the Sun.  The implication was that the 'Indians' were simple Sun-worshippers, and the wholesale looting and destruction of their iconography prevented any questions being raised.  Awfully convenient.   I wonder whether the Dominicans had found imagery that they immediately recognised as heretical in their own cultural environ, and set about purging it utterly...

Coricancha was not just a repository for a vast amount of wealth. It also acted as an observatory, containing markers that enabled the Inca priests to predict eclipses, solstices and equinoxes (8).  There is clearly more to this temple than Sun-worship.

This is where the paper that Lee found makes for very interesting reading.  In it, the researcher Jan Sammer, who has worked with Velikovsky in the past, argues that the conclusion that Coricancha was a Solar Temple is mistaken, and should have been completely dismissed over 100 years ago:

"...There was little reason to doubt the reality of an all-important solar cult in Tawantinsuyu [The Incan Empire].  But a little over a century ago a series of momentous literary discoveries changed this situation very materially. In 1873 Clemens R. Markham, in the course of a survey of some of the collections of Madrid’s Biblioteca Nacional, lighted upon a previously unknown sixteenth- century manuscript entitled "Relacion de antiguedades deste reyno de Piru".. Its author, an Aymara Indian named Pachacuti Sallkamaywa, was from a noble family, newly converted to Catholicism.

"Until the publication of Juan Pachacuti’s manuscript a century ago we lacked the evidence that could decisively counter the unanimous opinion of the various chroniclers that the Temple of Viracocha was dedicated to the Sun. However, Pachacuti included in his manuscript a rough drawing of the altar of that temple. The altar itself had destroyed soon after the conquest. This representation is crucial for an understanding of the cult of the Coricancha and, thus in Tawantinsuyu as a whole." (9)

The golden disc is shaped in a distinctly oblong shape, and is separate from the self-evident Sun-disc. We also have a complex set of celestial symbols of which the Sun is simply one of several.  The elliptical disc appears to be part of a celestial Trinity. This is hardly the hall-mark of a major Solar Cult among the Inca peoples.

So if Coricancha was not dedicated to the Sun, then what did the Incas devote their golden temple to?  In the centre of the diagram of the High Altar is a massive golden ellipse.  To either side of it are the Sun and Moon, and depictions of Venus as the Morning and Evening Star.

The ellipse is surmounted by a cross of stars, and further stars lie below it.  This celestial scene focuses upon the ellipse as the all-important source of the Universe in the form of the god Viracocha.

Sammer then goes on to argue that this ellipse signifies the 'true Sun' of the Inca, a phrase we have heard before...

Does the elliptical disc that was the centre-point of the Inca religion point to a quite different 'true sun'? Might this heretical religious belief be the true meaning of the widespread devastation of the indigenous culture by the Conquistadors?

Let us say that a similar heresy was practiced in Europe at the time by secret cults already persecuted by the Church.  If the Spaniards then came across an 'Indian' people in South America who independently lavished their remarkable wealth on such iconography, would that idea not return to Europe to reinforce the cross-culturall truth of that heresy?  What better course to take than to destroy the temple, melt down the gold and declare the ravished remains a 'solar' cult so that no further questions could be asked.

"Pachacuti does not tell us explicitly what was the “Sun called Viracochan pachayachachi” only that it was not our Sun, which he designates as Inti. The solution to this puzzle will obviously provide us with a most important clue to the real cult of Tawantinsuyu." (9)

Sammer goes on to argue that the symbolism is meant to depict Saturn, but I think this is unlikely.  Is the ellipse and cross of stars a representation of the Dark Star?  Without a more detailed examination of the High Altar it is difficult for me to say.  We know that Nibiru's orbit is highly elliptical, and that it is symbolically connected with a celestial cross.  There's every chance that this diagram indicates that the Incas were aware of the Dark Star and its return to our solar system.  If Sitchin is correct about the Anunnaki's love of gold then we have a further connection with the rich contents of Coricancha, the 'golden enclosure'.  It is a fascinating possibility.

With thanks to Kathy Doore.  The entire essay 'The True Sun of the Incas' is also featured on her website:

My grateful thanks to Lee Covino and Greg Jenner