Cosmic Conspiracies was contacted by a farmer in South Wales on 25th August 2003 concerning some large marks on the ground that had appeared in one of his fields ‘overnight’.  The field in question is located near the village of Magor in South Wales. The farmer, Liam, said that the marks were ‘the most peculiar thing I’ve ever seen in my life’.  They formed a square patch approximately 15 feet across, and each corner had an identical design protruding from it.  The grass in the area concerned appeared to have been dried out completely, possibly burnt.  Liam was very keen for someone to come and have a look at the marks, and had tried in vain to get the local media interested.  He found our website on the Internet and had subsequently phoned our ‘Gloucestershire UFO Hotline’. 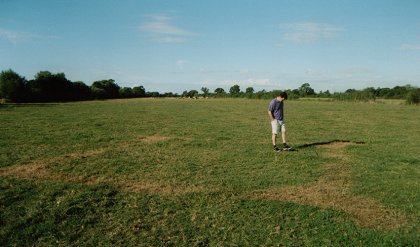 We arranged to meet with his son, John, on the following Saturday morning to inspect the site in question.  He was just as puzzled as his father had been on the phone.  We entered the field as Liam’s herd of cows watched on, bemused.  We measured the marked area out and found it to be asymmetrical.  The ground had not been burned, but the grass in the areas making the pattern was very dry, or dead.  On proceeding to take a soil sample Andy asked if it would be okay to dig down into the soil.

We recommended that Liam and John contact their local museum’s archeologist to arrange a meeting with him.  Scanning the site with a metal detector might also prove to be a good idea on the off-chance there might be any buried coins or tools. 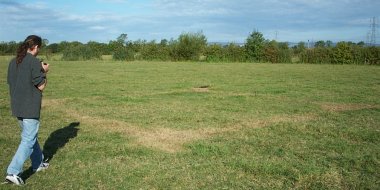 Although this didn't turn out to be caused by any kind of paranormal phenomenon, it was an interesting little case and we were pleased to be able to offer a solution to he problem which had been troubling the farmer.  We placed stones around the site to mark it out, knowing that the marks would disappear soon after the next heavy rainfall.  If we lived a little closer we would have enjoyed getting involved in digging the site.  Quite what the herd of cows would have made of that I'm not sure, but it's got to be better than having their private parts excised by an alien laser!