Gold, the Anunnaki and Global Warming

One of the most curious things about Zecharia Sitchin’s theories is his description of the Anunnaki’s search for gold.  Their descent to Earth was triggered by a worsening environmental disaster on their own world, Nibiru.  They came here with the explicit need to collect one thing: Gold.  Why?  Not for jewellery, certainly.  Their plundering of the earth’s gold supplies was necessary in order to achieve just one end.  They needed to pump the stuff into the atmosphere of Nibiru.

This is one of the strangest aspects of a very strange story.  Nowadays, we are all familiar with the idea of environmental threats, of impending ecological collapse within a couple of generations.  But when Sitchin wrote his ‘12th Planet Theory’ back in 1976 there was no such concern, beyond worries of oil prices and OPEC’s control of the world’s economy.

This coming week will see a discussion of our modern problems of global warming, as scientists report on what the governments of the world need to do to avoid the very real threat of global super-heating.  In an implicit acceptance of the threat of global warming, the U.S. have been pressurizing scientists to recommend hi-tech solutions.  These include space mirrors to deflect 1% of the light of the Sun away from Earth.  Reflecting light away from our planet by just a small amount would, apparently, compensate for the greenhouse gas effects going on due to industrial and domestic output of carbon gases.

One of the ways to reflect light into space would be to introduce reflective material into the highest part of the earth’s atmosphere.  Such a solution is being considered seriously.  Suggestions include the release of millions of reflective balloons into the upper atmosphere.  Another is changing the emission gases of aeroplanes to produce white and longer-lasting contrails.  A third is releasing sulphate droplets into the upper atmosphere, which would mimic the action of cooling volcanic eruptions. Like all untested medicine, the side-effects of sulphate droplet release remain unknown.

This all suddenly sounds rather familiar.  Releasing material in bulk into the atmosphere of our planet?  As Lee Covino has pointed out to me, this is pure Sitchin!  It’s what the Anunnaki did with our gold.  They spent hundreds of thousands of years purportedly mining the stuff, and shipping it back to Nibiru when that planet’s elongated orbit brought it round to the planetary zone of our star every 3600 years.  Once they had enough of the stuff, the Anunnaki left.  It now seems likely that the purpose for the gold was not to keep the homeworld's planetary heat in, but to keep the light out! 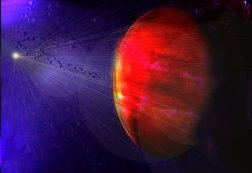 Now it is our turn to panic about the environment; and with good reason.

I’m not talking about the ebb and flow of ice ages within the current Ice Epoch here, which may be attributed to the Milankovitch Cycles.  I’m talking about greater stretches of geological time, including those extreme points in time when dinosaurs lived at the ice-free poles, or when the Earth was covered in so much ice it has been compared to a planet-sized Snowball. 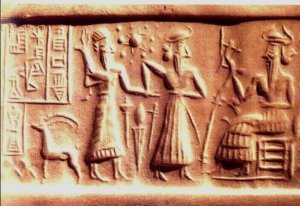 I have suggested that these massive shifts in climate were facilitated by shifts in the orbit of the brown dwarf companion, which I dub the Dark Star.  The Anunnaki live on a world orbiting this Dark Star. The atmosphere of their own homeworld has been subject to global warming over the last 4 million years, during the time when our world has been colder. That’s why they introduced gold into their atmosphere: to reflect some of the light of their unusually bright and excitable Dark Sun.  That’s why they took the very hazardous step of coming here, a planet which was toxic to them.

Now they have left, perhaps because their world is now safe.  Whilst ours is presented with the Abyss.

This is simply not a coincidence!

Perhaps, and I mean this light-heartedly, we need to go to Nibiru and take back our gold to prevent our own planet from overheating.  Perhaps this might be one of the remarkable technological solutions suggested by the U.S. Government, which seems to know quite a bit about pumping reflective substances into the high atmosphere all of a sudden.  Perhaps they also know quite a lot about the Dark Star, Nibiru and the Anunnaki…

3rd February 2007, with many thanks to Lee Covino

I've had some interesting feedback from other researchers, and various people who enjoy Zecharia Sitchin's work.  My friend and colleague Lloyd Pye writes to point out that he presented very similar ideas in his 1997 book:

"...Scientists have been touting the "particulate gold shot into the upper atmosphere" theory for quite a while now, at least before 1997 when I published "Everything You Know Is Wrong" (1). I mention this as the best apparent solution at that time (p232). Since then, as you point out, the "reflective mirror" and "reflective balloon" theories have appeared, but that is probably to protect the gold more than anything else. I'm not sure which is the best solution, only that gold has been touted for at least a decade."

Also, Eric Harrington points out that he has yet to come across an ancient reference to the use of gold in Nibiru's atmosphere in Sitchin's work (2).  He suspects that the idea in one of Zecharia's original ideas, rather than something based upon a textual quotation., which puts things into perspective.  Even so, Mr Sitchin was ahead of his time on this front!

Finally, Die Schandausstellungen suggests, (a little tongue-in-cheek) there might be some money in it for me, by suggesting alternative sources for Global Warming.  It seems that various American Energy Producers are keen to provide substantial sums of money to any scientific authority prepared to extol their political position on this issue.  Since I agree with the IPCC about Humanity's massive contribution to the Global Warming effect, and given that I am not any kind of authority on anything at all (except perhaps the Dark Star!), I suspect I shall remain poor.  I agree wholeheartedly with the following comment:

"Lord Rees of Ludlow, the president of the Royal Society, Britain's most prestigious scientific institute, said: "The IPCC is the world's leading authority on climate change and its latest report will provide a comprehensive picture of the latest scientific understanding on the issue. It is expected to stress, more convincingly than ever before, that our planet is already warming due to human actions, and that 'business as usual' would lead to unacceptable risks, underscoring the urgent need for concerted international action to reduce the worst impacts of climate change. However, yet again, there will be a vocal minority with their own agendas who will try to suggest otherwise."" (3)

2)  Zecharia Sitchin "The Earth Chronicles" series of books, from 1976 onwards 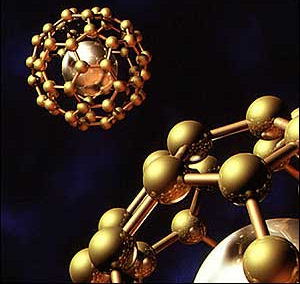 When Sitchin first wrote up his theory about Nibiru, the concept of global climate change was in its infancy, even among environmental scientists.  It’s certainly true that science fiction writers had thought about terra-forming Mars, etc, but the idea that we were, as a species, capable of altering our planet’s own atmosphere had not really taken off.

Sitchin proposed that the Anunnaki love of gold had a pragmatic reason behind it.  Earth was a mining colony, effectively, and the gold was being taken from this world to Nibiru to somehow help sustain its atmosphere.  How this might have been put into practice was not clear, besides some kind of scattering effect in the Nibiruan atmosphere.  Like the habitability issue, this has been a loose end for many decades.

But, like so many times, science has gradually caught up with Sitchin.  It’s now easy to see that a technological, industrialised race might create a spiral of change to a planet’s atmosphere, with potentially disastrous consequences, above and beyond the natural cycles of change over time.  There are now grand schemes being considered here on Earth to turn the tide of global warming, should its gradual march lead to significant problems in years and decades to come.  Might the Anunnaki not have had similar issues on their world, perhaps more advanced?  And in what way could gold have been the answer?

One of the regular contributors to the Dark Star Planet X board, Mark Keller, has come up with some new ideas on the matter.  He writes:

"I have had an alternative idea to the environmental calamity that took place on Nibiru. I wonder if the problem could have been caused orginally by the Anunnaki trying to terraform their own planet. As I imagine it, if the planet is tidally locked then a great deal of the planet could/should/would be uninhabitable [as described in Andy Lloyd's novel 'The Followers of Horus']. Trying to increase the heat capturing effects of their atmosphere so they could live on the majority of the planet could have had similar unexpected consequences on Nibiru as this post's topic suggests it would were we to try it on Earth.

"Dumping pure finely powdered gold into the atmosphere may have been as ineffective in the long run as trying to use the planet's volcanoes, but dumping nano machines that used gold in some way and/or made of gold could have been more in line for what the Earth's gold was ultimately used for. These nano machines I propose would have been controllable, able to congregate and disperse, rise and sink in the air column when needed to mitigate the negative side effects of geoengineering and enhance the positive effects."

This highly original idea made me wonder whether it might one day be possible to create nano-machines that performed basic chemistry? So, taking Mark's idea of gold-based nano-machines buoyant within the atmosphere, might they perhaps act as integrated catalysts designed to take CO2 out of the atmosphere and replace the (allegedly) harmful gas with a less worrisome carbon-based by-product, which would then harmlessly fall to Earth? The energy required to drive such a chemical transition would be provided by UV radiation from the Dark Star, simulating the kind of natural process taking place in photosynthesis. The Anunnaki would have to have churned out an incredible number of these nano-machines to make any kind of long-term impact on a planetary scale.  Which would, of course, explain their significant desire to obtain gold from Earth.