Given all this exciting speculation about the tie-in between the brown dwarf in the Oort Cloud, as proposed by Murray, and ancient mythology, when are we likely to get a few more facts?  It’s entirely possible that the brown dwarf has already been seen and documented by astronomers as part of a general sky survey.  It may be found amongst the thousands, perhaps millions, of faint stars catalogued routinely, with the astronomer in question simply failing to realise what it was.

Astronomers are hampered by the extremely slow procession of this dark star through the heavens, which is ‘several orders of magnitude too small to be detected’.  Also, Murray’s placement of the dark star is close to the galactic equator, meaning more background noise in the infra-red region where detection would be most likely (1).

There are a number of ways of specifically seeking out brown dwarfs, however.  The best direct method is using spectroscopy.  Griffin explains:

"In stars where sustained nuclear reactions take place, lithium will quickly disappear as it breaks down into helium at a temperature of around 2 million degrees.  Because of mixing in such stars the whole star will soon lose all of its lithium.  Thus if lithium can be detected this is a sure sign that the object is not a hydrogen-burning star, such as a red dwarf.  Luckily for astronomers the strongest spectral line for lithium lies in the visible region (670.9 nanometres), making it relatively easy to detect.

"In the infrared part of the spectrum, water (steam) should be easily seen, and Methane (CH4) should also be prominent.  For a "hot" Brown Dwarf carbon monoxide may be seen, giving way to carbon dioxide at lower temperatures.  Using infrared filters (as in the discovery of PIZ 1) should therefore be an effective method of finding them." (2)

If one suspected that a given ‘star’ was relatively close to the Sun, rather than many light-years away, then this could be gauged by using parallax.  As the Earth moves around the Sun, its relative position varies by up to about 200 million miles  (the diameter of its orbit).

When scanning the star-fields at opposite ends of its orbit, the back-ground stars will vary little in the relative positions to one another.  However, an object among them that is closer than our galactic neighbours will be seen to shift its position, thereby indicating its proximity.  In fact, John Murray has been carrying out this kind of work using the Royal Astronomical Telescope in Australia.  So far, no luck...at least as far as I know.

Alternatively, plates of a given sky-field could be compared carefully after several years have elapsed to detect any stars which have slightly altered their positions in the meantime.  Again, this would be indicative of their relative proximity, but this method carries with it the disadvantage of lost time.  It's the classic search for a needle in the hay-stack, and the challenge appears to have been taken up by Dr John Murray himself, targeting the constellation of Delphinus (see DarkStar2).

However, if large-field photographic exposures existed, over a period of time, for the right part of the sky, then this would offer a good opportunity.  The problem is, in which part of the sky is the brown dwarf located, exactly?  Murray admits to a fairly large margin of error.  This whole method of searching could also be greatly enhanced by the use of computer-enhanced analysis.  All in all, if there’s a will, there’s a way. (3)

"Such an object at 25,000AU would not have been observed by the IRAS survey but will easily be within the detection limits of SIRTF IR bands.  Depending on its mass, the perturber would also be within the detection limits of ISO and Gemini/SOFIA bands.  It is also possible that its radio emissions would make it distinguishable in sensitive radio telescopes such as the VLA (Very Large Array)." (4)

This appears to be a more optimistic assessment.  Given the historic recognition given to the individual or team who discovered such an entity orbiting the Sun, it seems likely that a great many astronomers are quietly working away with their telescopes, scanning the Murray and Matese data-bases for clues to target in on the brown dwarf.  The question is, what happens if and when they find it?  Are the sky-searchers aware of the potential repercussions of their discovery?  One suspects not, but since most professional astronomers are unlikely to risk their credibility by being drawn into this kind of debate, there is no way of knowing.  Nevertheless, the scientific knowledge that would emerge from such a discovery would be remarkable.  Where travel to the stars remains a distant dream, exploration of a major body in the Oort cloud would be an exciting prospect, at least by unmanned probes.

The early spacecraft to leave the planetary Solar System, on their way to the stars, such as Voyager and Pioneer, have covered vast distances in the intervening years.  They are still able to send small packets of data back to us, but we no longer monitor their weak transmissions.  Nevertheless, it became apparent to NASA scientists that the probes were not making the progress expected, possibly indicating they were subject to greater Solar System gravity than previously thought.  Early in 1999, NASA scientist John Anderson pointed out how Pioneer 10 and 11, as well as the spacecraft Ulysses which is in a polar orbit around the Sun, were displaying anomalous behaviour.  The Pioneer spacecraft appeared to be slowing down, so much so that it seemed that they would eventually begin to fall back towards the Sun. (5)

The scientists who had been studying this behaviour could offer no explanation for the slowing down of the probes, and had checked and rechecked their data for years.  The results were substantive enough to call into question theoretical understanding of gravity.  Of course, this might indicate the additional gravitational influence of our unseen brown dwarf.  As Sagan postulated this possibility in 1995, before this scientific anomaly was found;


"Larger worlds may, for all we know, also be hiding in the dark beyond Pluto, worlds that can properly be called planets.  The farther away they are, the less likely it is that we would have detected them.  They cannot lie just beyond Neptune, though; their gravitational tugs would have perceptibly altered the orbits of Neptune and Pluto, and the Pioneer 10 and 11 and Voyager 1 and 2 spacecraft." (6) 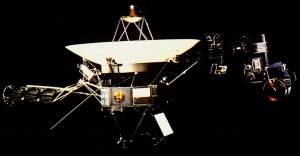 One year after the NASA report, an explanation was given about Pioneer 10’s weird behaviour.  It would appear that the craft had been unexpectedly "pushing itself in one particular direction".  No explanation was forthcoming about the same behaviour in the other probes, and this discussion of Pioneer 10 was made in the context of it having been "mysteriously knocked off course" by a new, as yet unidentified, object orbiting the Sun. (7)  The effect occurred in 1992, when the craft was deflected from its course for about 25 days.

Which begs the question, if the probe is somehow managing to manoeuvre itself in deep space, with no power source, then should NASA scientists be trusting its data to the point of announcing a new Kuiper Belt object?  Why is it okay to trust data from 1992, but dismiss later data as due to mechanical difficulties, when the effect is evidently much greater?  NASA "ceased monitoring" its signals in 1997.

The four probes are departing from the Sun rapidly, and Voyager 1 would have been scheduled to pierce the boundary of the Solar System, the heliopause, and enter true interstellar space in 2010.  The Voyagers are following trajectories at inclinations to the ecliptic, while the Pioneers are leaving our system along the plane of the planets.  If a large body were exerting an effect on the movements of these distant spacecraft, would it not be possible to gauge its position and mass through triangulation of its relative effects on each? 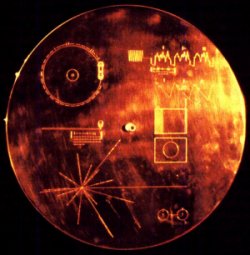 Or that previously held theories of Solar System mass needed reviewing.  But it is an intriguing thought that either Voyager 1 or 2 could find itself coming across a hidden planetary system in our own comet cloud.  One wonders what the Annunaki would make of this probe, with its ET- friendly plaque designed by Dr Carl Sagan.  Here he describes its content:

"Accordingly, as each Voyager left Earth for the planets and the stars, it carried with it a golden phonograph record encased in a golden, mirrored jacket containing, among other things: greetings in 59 human languages and one whale language…116 encoded pictures, on our science, our civilisation, and ourselves; and 90 minutes of the worlds greatest hits…" (6)

In the medium term, its relative closeness on the scale of neighbouring stars would make it a fascinating target for analysis and future exploration.  The possibility of life-supporting moons is bound to become an issue.  The purpose of this book is to create an early assessment of the possibilities, thereby enabling the public to seek answers to the very wide repercussions of the discovery of this failed star.  It must not be allowed to become a 24 hour wonder, an astronomical curiosity tagged onto the end of the daily news, thence to be forgotten by all but the scientific community.

After all, it could be harbouring secrets kept from us or thousands of years.  It may also be our Nemesis, in the true sense of the word, if its perihelion passage in 1800 years time were to occur on our side of the Sun.  That may seem like a long time, but bear in mind that we were warned about this 2000 years ago, and still we lie in its path, ignorant of the future Apocalypse to come.

Brown dwarfs have only been located since about 1995.  This was because of the difficulty in detecting relatively dark objects in the sky whose heat output greatly outweigh their light emissions.  The Infra-Red Space Observatory (ISO) would have been in a position to carry out more detailed research on confirmed brown dwarfs, but its work was completed before brown dwarfs were located in sufficient numbers to study.  However, a new generation of infra-red detectors are soon going to be available to scientists keen to discover more about failed stars, and one hopes that the potential for discovering a brown dwarf in a distant orbit around the Sun might also be increased:

"ESO's Very Large Telescope (VLT) will soon be equipped with the VLT Mid Infrared Spectrometer/Imager (VISIR), an extremely powerful mid-infrared sensitive instrument that is well suited for this kind of studies.

Further into the future, the Atacama Large Millimeter Array (ALMA) will provide excellent opportunities for in-depth investigations of Brown Dwarfs. With unequalled sensitivity and very good image sharpness, ALMA will be able to image disks around the nearest Brown Dwarfs and possibly, to detect signs of (forming) planets in them." (9)

Already, ground-based observations in the mid-infra-red range are being carried out by the Thermal Infrared Multimode Instrument (TIMMI2) on the ESO 3.6-m telescope at the La Silla Observatory (Chile).  In the next few years our understanding of brown dwarfs is likely to increase exponentially.