NIBIRU AND THE ‘LOST TRIBES OF ISRAEL’ CONNECTION

OTHER EVIDENCE SUPPORTING THE LOST TRIBES WITHIN AMERICA 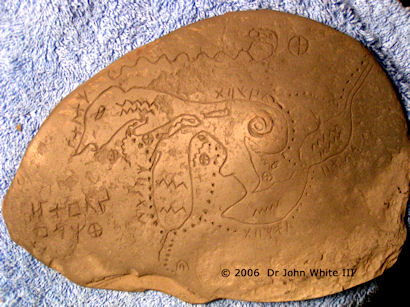 Reportedly found in the American mid-west, this ancient map of the Great Lakes (to the right) depicts exploration routes in the form of dotted lines (8). In the upper right-hand corner, notice where the route originates—the St. Lawrence River. Then the trail continues around the lakes terminating below Lake Michigan southward into the Ohio Valley.

Was this map made by the Khumry people showing their migration route? Entirely possible, I’d say.

My contention is the Khumry people were the mysterious “mound-builders” that flourished within this valley and inter-married with the Cherokee long ago. They constructed the famous “Serpent mound” in which I also believe to be a replica of the Destroyer. See Planet X and the Kolbrin Bible Connection. (link below)

Furthermore my investigation affirms that the same Khumry mound-builders of the British Isles migrated to America and continued their construction process within the Ohio valley region.

As with Jeremiah’s tomb in Ireland, the same mound-building technique was used for burials in Ohio as well. It’s not surprising then to find an interesting ‘Khumric’ artefact discovered inside one of these similar construction-style burial mounds in Newark Ohio. See below:

“In November of 1860, David Wyrick of Newark, Ohio found an inscribed stone in a burial mound about 10 miles south of Newark. The stone is inscribed on all sides with a condensed version of the Ten Commandments or Decalogue, in a peculiar form of post-Exilic square Hebrew letters.

The robed and bearded figure on the front is identified as Moses in letters fanning over his head. The inscription is carved into a fine-grained black stone...(9)

“The Bat Creek Stone was professionally excavated in 1889 from an undisturbed burial mound in Eastern Tennessee by the Smithsonian's Mound Survey project... Hebrew scholar and archaeologist Robert Stieglitz (1976) confirmed...the main line [to] read RQ , LYHWD[M], i.e. “Only for Judea,” or “Only for the Judeans” if the broken letter is included.

In 2002, researchers Alan Wilson, Baram A. Blackett, and Jim Michael announced that the Bat Creek stone is in fact inscribed with the the ancient Welsh Coelbren alphabet, and reads, in Welsh, “Madoc the ruler he is.” These authors identify the Bat Creek tumulus as “the likely tomb of Prince Madoc.”

Madoc was a Welsh prince who is reputed to have sailed to America in 1170 A.D. However, Wilson [and Blackett] maintain that he was in fact a brother of King Arthur II, and sailed in 562 A.D. This would reconcile their reading of the inscription with the C-14 date of 32 A.D. - 769 A.D....If the Bat Creek stone, which was professionally excavated and whose context been carbon-dated to ancient times, were clearly engraved in Coelbren letters, that would itself be sufficient to vindicate the authenticity of Coelbren...” (10)

Glenn Kimball writes “Several decades ago a sword from the sixth century... was found in Pennsylvania. This sword was featured in the book "Holy Kingdom" by Adrian Gilbert from England and his research team. Adrian suggested that it [looks]...very [similar] to the sword Excalibur...Written on the blade of this sword is the word "Colbrin" or "Kolbrin"...According to Adrian Gilbert, “Alan Wilson had made two long visits to the USA in 1992 and 1994 cooperating with USA colleagues on the transatlantic voyages of AD 562... Welsh Coelbren Alphabet inscriptions exist in large numbers in North America proving these voyages.” (2) 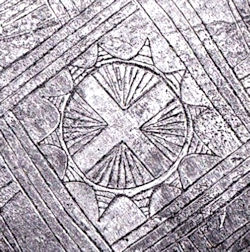 Found in the state of Mississippi circa 1883, the engraved shell gorget shown above (11) depicts what I believe to be the Destroyer (Nibiru) or the Crossed Planet. Notice the sun-like appearance around the circular edge itself. Now compare that to the ‘Mithras’ iconic symbol below supplied by Andy Lloyd in our ‘Sol and Mithras’ web-page (12). The resemblance is striking to say the least. In my opinion, it is the same crossed planet in both pictures—Nibiru. 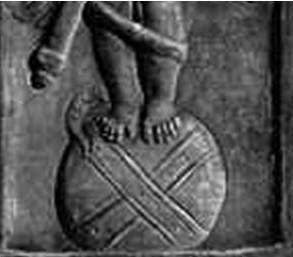 The map provided below is a recap of possible Khumry migration routes with corresponding artefacts found: (13) 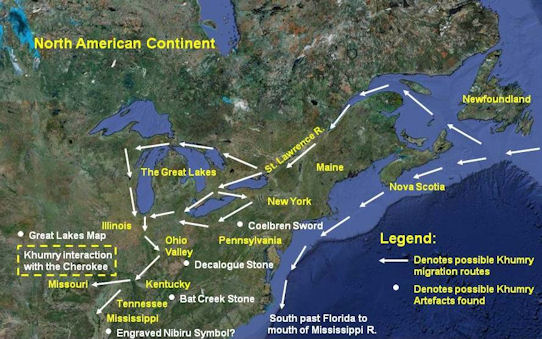 PRESERVATION OF THE KHUMRIC RECORDS

Another reason I maintain the Kolbrin MS to be authentic is the fact that an extraordinary amount of detail was painstakingly recorded on how to preserve the Khumric scrolls. If all of this was an outright fake, why bother to write any of this exquisite detail down in the first place! As I read these passages, I get the impression the scrolls were prepared for a deep burial near water so they could not be found easily. Oak Island perhaps in Nova Scotia? I can only speculate. See below:

‘SOF:24:1...Last of the Metal Plates...In the containers I have gathered together all the books given into my care and I have done all the things I was instructed to do, and the work of my father is now complete. The metal will stand the test of age and the cutting is the finest workmanship.

SOF:24:3 The Book of Magical Concoctions has six thousand eight hundred and ten words and this was the most difficult to remit, for it was a work of mystery and hidden things.

SOF:24:4 The Book of Songs and The Book of Creation and Destruction were not worked under my hand, but they are well constituted and will not perish. The Book of Tribulation was beaten under my eye and there are the books in The Great Book of The Sons of Fire which are not of my workmanship. I helped in part where the words were marked out and I struck them.

SOF:24:5 The Book of Secret Lore and The Book of Decrees are joined into The Great Book of The Sons of Fire and they, too, are enabled to last forever.

SOF:24:6 The metal is as our masters desired, made cunningly by the secret methods of our tribe and it will never perish. The marks are cut so that when seen to the right of the light they stand out clearly.

SOF:24:7 The bookboxes are of twinmetal founded with strength and turned with great heat, so that there is no joint where the ends come together. When closed and sealed water cannot enter.

SOF:24:8 When you read these things in times ahead, think of us who made the metal so imperishable and cut the words on it with such care and heavy labour, using such skill that in the years of rest they have not been eaten off. Observe its brightness and wonder, for it will never tarnish.

SOF:24:9 We are the sons of The Sons of Fire, men so called because fire was necessary to their metalworking. Today we name our sons over the fire and forge, as they did, and each one of us belongs to the same fire.

SOF:24:10 Read carefully the sacred words which are written and may they be a lodemark to a greater life.

SOF:24:11 I, Efantiglan, and my father, attended to the making of these books and their covering containers. Those who mixed the metal and worked it by forging and those who cut upon it are members of our tribe, and it is well made and will last forever.

SOF:24:12 Malgwin recorded these books before they were consigned to the future and the name by which they were called is The Living Book For The Living’.”

Throughout the Kolbrin MS the message remains the same. The Khumry (writing in their ancient Coelbren alphabet) warn us of a returning monstrous planet. As I’ve stated before, it really is the Rosetta Stone, the Holy Grail if-you-will of all ancient texts supporting this fact. Why then was this manuscript released to the public in 1992? Well, the following passage might explain this question:

MAN:3:9… the hour of the DESTROYER is at hand. MAN:3:10 In those days, men will have the GREAT BOOK before them, wisdom will be revealed, the few will be gathered for the stand, it is the hour of trial. The dauntless ones will survive, the stouthearted will not go down to destruction.

Ever since the Khumry scattering, the ‘elite’ families of the world have known about this incoming celestial event. And it is my belief they released the “Great Book” to the general public so we could also be privy to the warning. Even if you do not believe in any of this, the elite families do. So take heed when I say the Destroyer was a fact known to the Lost Tribes of Israel, a fact the Wanderers eventually brought to America. Today we know it as Planet X, the Greeks knew it as Phaeton, the Khumry people knew it as the Frightener and the Sumerians knew it as Nibiru.

(9) The Newark Ohio Decalogue Stone and Keystone. With thanks to J. Huston McCulloch.

(12) Sol and Mithras, https://www.darkstar1.co.uk/gregjenner18.html with thanks to Andy Lloyd.