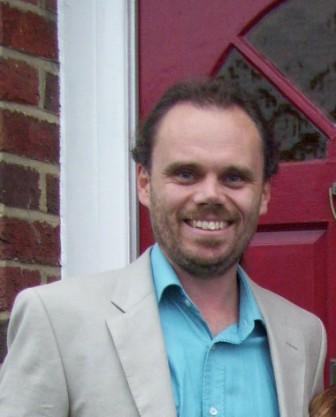 In 2007 I revamped the Rainforest mural at Longlevens Junior School, with the help of Year 5.  Their reading assignment for the summer term was Kensuke's Kingdom, by Michael Morpurgo.  The idea was to adapt the rainforest mural to become part of a desert island in the south Pacific, the reclusive home of a Japanese Second World War veteran named Kensuke. 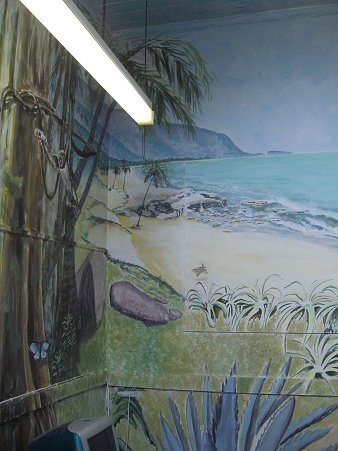 This meant painting over large parts of the mural to create a tropical island shoreline as seen from the fringes of the island jungle. 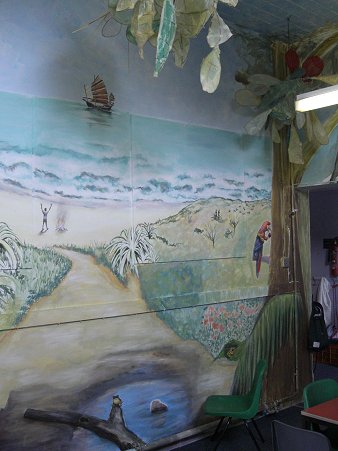 There was ample opportunity to include some tall palm trees in this 15' high room!  The children helped me to paint in the vegetation and add various features, like animals, insects and butterflies.  The scene shows Michael, who is stranded on the island with his dog, trying to attract the attention of a passing ship: 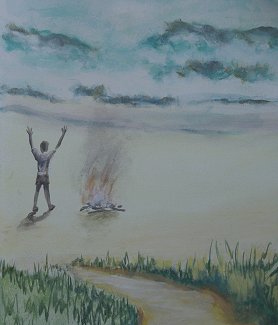 This is an on-going project, so more detail has yet to be added.  As Michael tries to attract the attention of the ship, he angers the only inhabitant of the island, Kensuke.  I wanted to feature Kensuke on the mural, at the door of his makeshift dwelling.  there's some artistic licence here, because in the book his little house is part of a cave.  But it worked better for the mural to make it into a Japanese style hut. Kensuke himself is painted life-size. 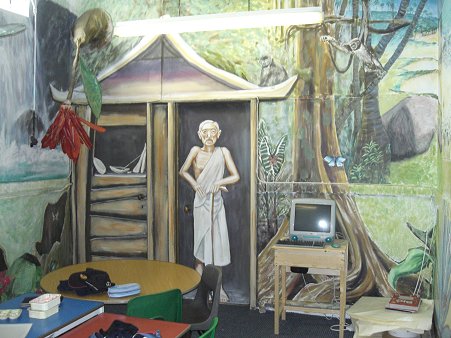 I've tried to capture not only his advancing age, but also his stern countenance.  He's actually painted onto the door to the Year 5 girl's toilet!  Not sure the girls were too impressed by that. 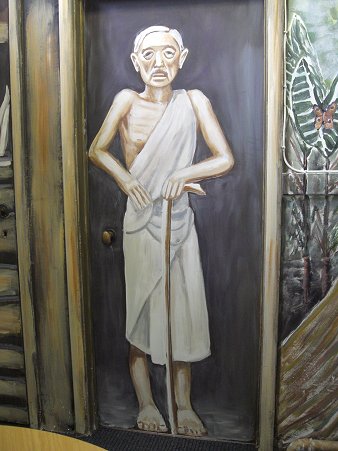 In the window to his hut you can see his shells which he paints each day, and eventually uses to teach art to Michael.  Quite fitting, really. 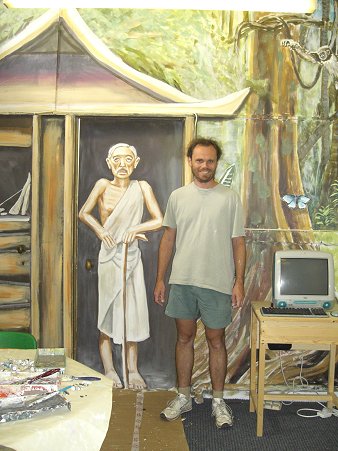 Other parts of the story are featured along corridor walls at the school.  I wanted to create a mural of Michael's time on his parents boat as they sail across the world.  Rather adventurously, I attempted to paint the deck of a yacht as seen from the cabin. 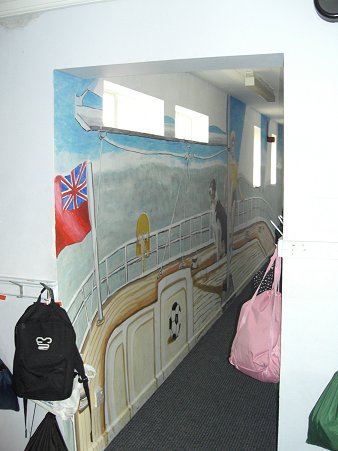 I've featured various maritime paraphernalia, as well as Michael (who looks a bit like a young Boris Johnson!), his dog Stella, and his football, all of which feature prominently in the book. 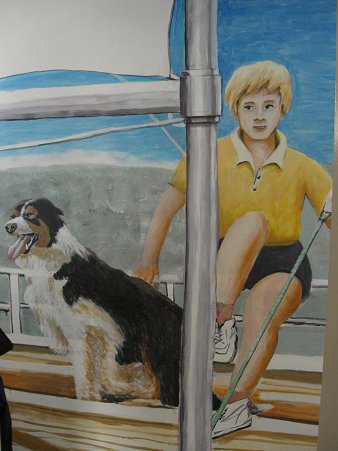 Michael is perched precariously on the side railings, with no lifejacket on, despite the obvious safety equipment available.  My son painted the flag; nice one, lad!

Of course, a thin corridor is not the perfect place to appreciate a 25' long wall mural, but I think that the confined space in the corridor actually gives the feeling of the cramped nature of an small ocean-going vessel.  Opposite the mural are some small rooms, and when you stand in them looking out into the corridor it feels like you are in the cabin of a ship, which is quite neat.

In 2009 I've been working on a series of 3 small murals about World War II, for Longlevens Junior School's Year 6 topic. 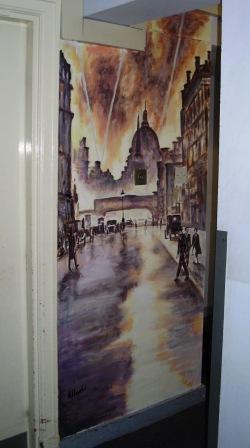 They're not quite finished yet, but this is how the work on them is going so far: 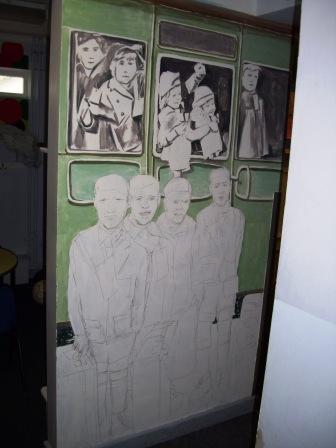 It's tricky to photograph these paintings because the size of the corridor they're in. The painting of the blitz in London is complete, and the evacuation scene not too far from completion. I worked from some old black and white photographs from the war, and tried to re-create the mixture of emotions felt by the children at the time.  As the present day school children come down this busy corridor, they pass these almost life-sized figures at eye-level, and hopefully get the sense of being crushed together on the platform.

I'll finish the work off during the half-term holiday, when the corridor isn't as busy as it is during term time!

In 2009, I also created stage scenery for the school's 'Bugsy Malone' production, which was performed in summer the summer term by Year 6 pupils. 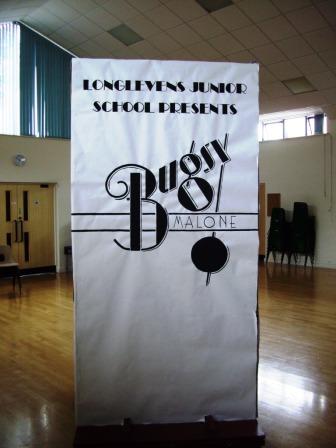 The scenery consisted of three sets. 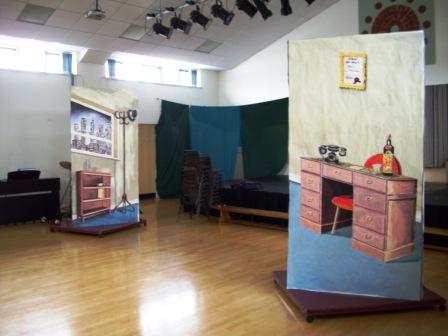 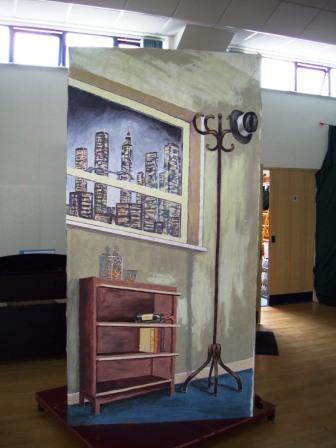 Being used to painting onto canvas, I found it difficult to adapt to working with the kinds of material I used to use myself back at school.  The paper wrinkled up with the wet washes, and mixing colour on the paper was next to impossible.  We grown-ups don't know how lucky we are being able to get our media and paper from art shops! 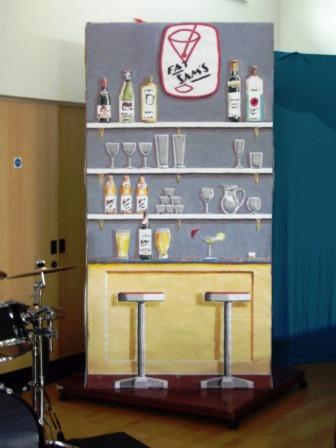 But the biggest challenge was the sheer scale of the paintings which each covered a table that a dozen or more children would normally work around.  That's why some of the perspective looks a bit wonky, as well.  The bottles in Fat Sam's bar are leaning to one side! 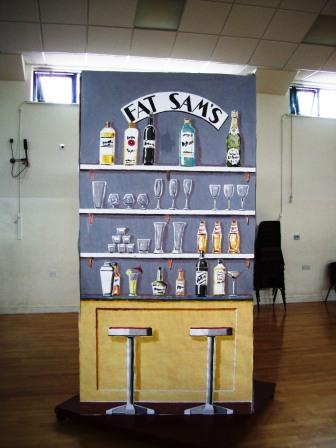 My thanks to the staff and pupils at LJS for their support, especially when I took over their art-room for whole afternoons!  I'm glad to say that the children put on an amazing performance.  The production was a great success.

The LJS production in 2010 required scenery in a '50s American style.  The first set was steps leading up to a High School.  Quite difficult, this, because the steps themselves would need to be of a realistic height for the kids on the set, but the school was also needed in the background, with the Stars and Stripes fluttering above.  So, to cram all that into an 8' space required some serious perspective work. 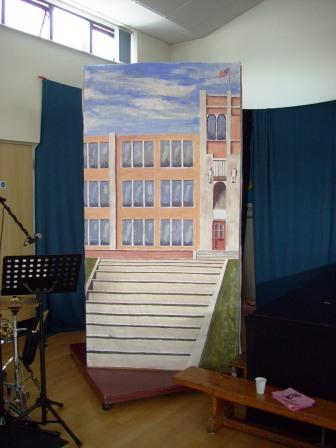 As last year, I painted the scenes onto 8' x 4' pieces of paper using school poster paint, and split the scenes between the two stands to create an extended whole: 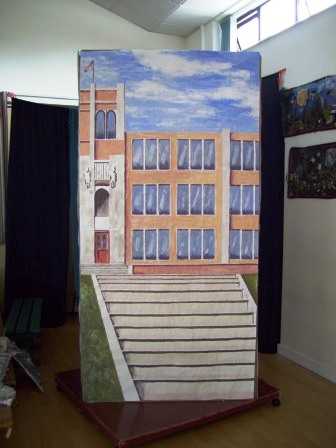 The second set was more fun to paint.  This 50's diner is colourful and bright - allowing me to create some light effects in the scenery.  I combined strong cadmium reds for the seats with pastels for the walls to provide good definition. 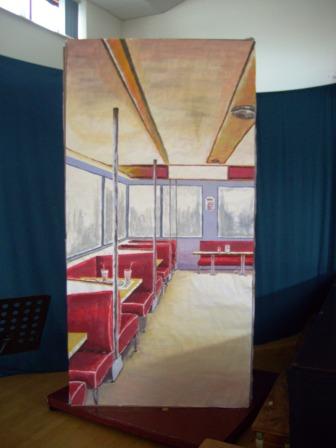 Again, the perspective was key, with the viewer's eye drawn to the back wall of the diner to create depth: 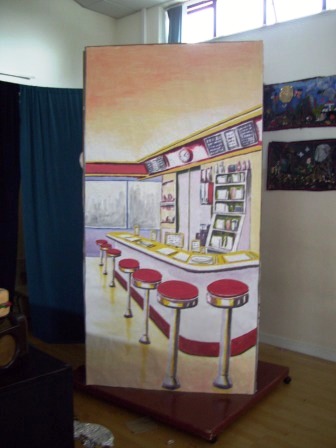 2012 is, of course, Olympics year and LJS celebrated the London Games with their Year 6 'Go For Gold' production.  For the scenery, I painted 4 pieces of Ancient Greek pictures. The first was a town scene. 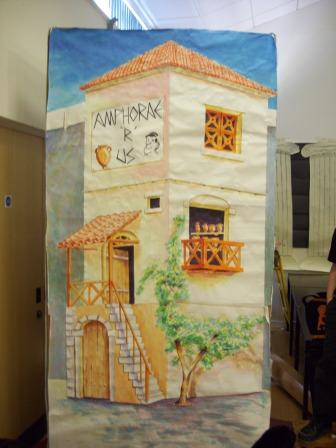 For inspiration, I drew upon some illustrations in one of the books in the Asterix series: 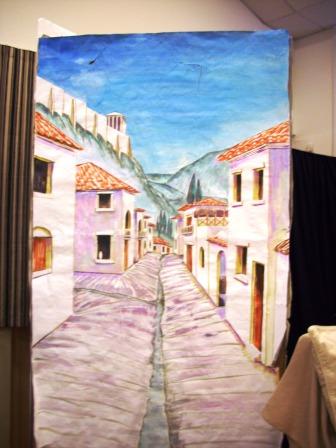 The second, a scene of Mount Olympus itself, the realm of the ancient Greek gods: 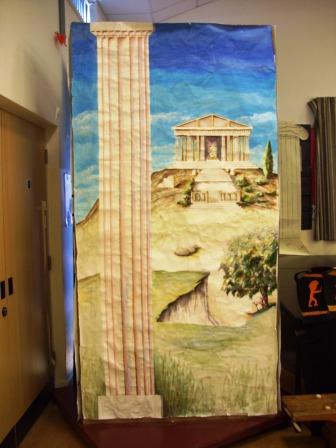 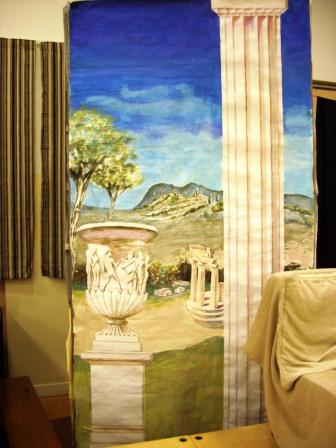 I was commissioned in the summer term of 2011 to create a rainforest mural at Arthur Dye Primary School, Cheltenham.  Their library was in need of refurbishment, and the idea was to create a 'snug' reading area in one part of the library.  This is how the area looked to begin with:

The mural took 23 hours to create, over three walls.  I wanted to make use of the windows, which looked out onto the school's central corridor.  Given the rainforest theme, it seemed sensible to make the walls that jutted out into the room into a rainforest hut.  I was also conscious of the fact that furniture was likely to be placed in front of the mural, to create the seating area.  So I gave the hut stilts, as is normal in very wet rainforest areas. 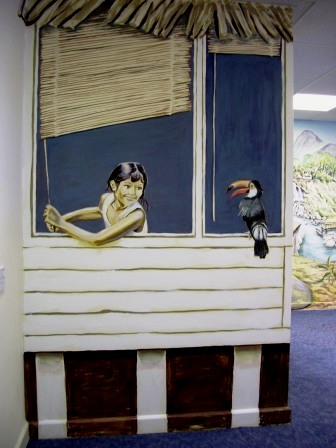 I also wanted part of the focus of the mural to be something the children could immediately relate to, so I painted a young girl at one of the windows opening blinds and seeing a Toucan alighting on the other window sill. 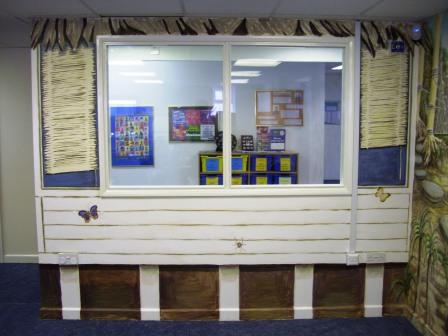 The main rainforest area was more of a challenge.  I envisioned a river running down through the scene, with another similar hut set up on the other side of the gorge.  A rope bridge seemed like an exciting feature to include as well, adding to the technical challenge of the piece.  Again, the main part of the scene needed to be elevated, to take account of furniture.  So I created a river valley, with a distant volcano and Mayan temple, and a pathway through the mural that would lead the eye to the distant hut - thus linking the larger hut with the focus in the scene. 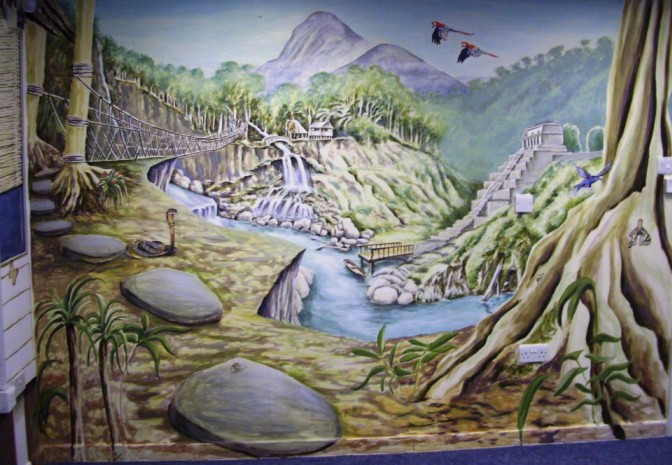 Into that scene I incorporated a great deal of detail, including several waterfalls, Amazonian parrots, spiders and a snake.  The whole scene has a pleasant, open feeling to it with a lot of interesting contouring.  The children seemed very excited by the entire project, and I hope that the area will be of inspiration to them for many years.  Here's how the entire mural looked when finished: 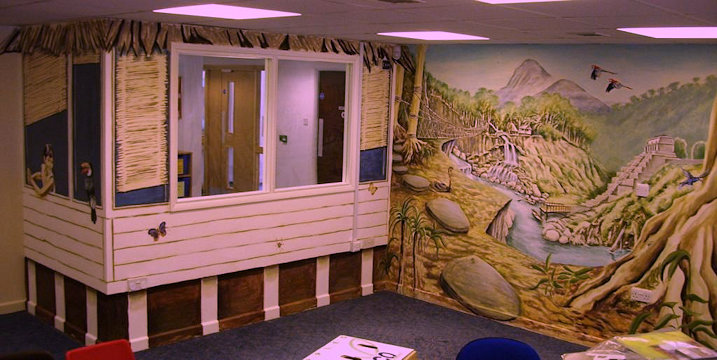 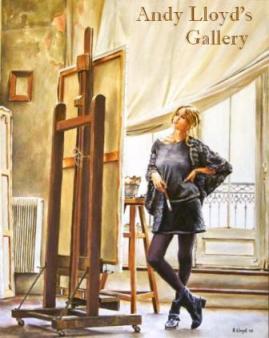